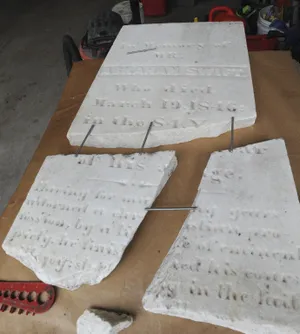 The headstone of Falmouth’s Abraham Swift broke into six pieces when it was hit by a tree during a storm about five years abo. [Ron Schloerb/Cape Cod Times] Cape Cod Times

FALMOUTH — A seventh-generation descendant of a local Revolutionary War militiaman is piecing together what’s known of the life of his ancestor, while a local craftsman pieces together the 170-year-old marble stone that marks his grave.

The flurry of activity is in anticipation of a May 18 ceremony planned by the Cape Cod chapter of the Sons of the American Revolution to honor Abraham Swift for his service.

“One of the primary objectives of the Sons of the American Revolution is to learn all the different aspects of the Revolution and to honor the men and women who were part of it,” said David Schafer, the Cape Cod chapter’s registrar.

Swift was born in Sandwich in 1762 but moved to Falmouth, where he served in the Colonial militia, married Olive Lawrence, fathered 11 children and died in 1846 at 84 years old.

Swift was a fifer and private in the militia during the American Revolution, serving eight days on alarm in Dartmouth and Falmouth in September 1778, followed by nine months and 28 days with a company stationed in Falmouth to protect the shore.

He likely was involved in a well-known alarm in Falmouth on April 3, 1779, when the Colonials fought off a fleet of British ships attacking the town.

The fleet’s sole interest in Falmouth was as a source of supplies. “They needed food, grains and livestock,” Schafer said.

On April 2, the British were being entertained at the Pasque Island home of sympathizer John Slocum, who overheard the naval officers’ plan to invade Falmouth the next morning.

Slocum, whose loyalty to Falmouth settlers appears to have outweighed his British sympathies, sent his son across to Woods Hole in a row boat to warn the Colonials. The British were greeted by rebel gunfire from the beach and ultimately were repelled.

While there is no written record of militia involved in the alarm, “Chances are good he was there,” said 82-year-old David Martin, past president of the Cape Cod Genealogical Society and Swift’s seventh-generation descendant.

Martin said his connection to Swift is on his mother’s side. Ties to the past have remained important over the generations in his family, he said. Both his father and grandfather had done a great deal of genealogical research. Martin’s brother and a nephew have Swift as a middle name.

Martin was admitted in 1991 to the Washington, D.C. chapter of the Sons of the American Revolution.

Swift’s gravestone has a bit of interesting recent history of its own, with a neighbor calling the police to report seeing a thief loading a headstone from the Old Burying Ground into his pickup truck. Police discovered the base had been dragged from its spot, and the headstone was missing.

A posting about the missing stone on the Police Department’s Facebook page drew strong reaction from residents, who were outraged that someone would steal such an irreplaceable piece of local history. Those commenting had their own theories on why the thief might want the stone, ranging from using it in a patio to selling it.

Hearing the news, Martin contacted police to say he had asked Grafton Briggs, owner of Baker Monuments, to repair Swift’s marble stone, which had been broken into six pieces by a falling tree in a storm about five years ago.

Briggs said he had taken the stone to his shop about a month ago and had returned to the cemetery to retrieve the base on the day he was spotted by the neighbor. It was too heavy for him to get into his truck, so he had to leave it behind, Briggs said.

Police took the base as evidence and impounded it at the station, where Briggs has since picked it up.

His plan for repairing the stone includes inserting stainless steel pins to hold the larger pieces together and using a special epoxy to secure them.

He started by cleaning the 270-year-old stone with a biodegradable product called D2.

“It was black as coal after lying on the ground for five years,” Briggs said. Swift’s name, date of birth and date of death are still legible, but the lengthy passage carved beneath the name has been nearly worn off.

In addition to his service during the American Revolution, Swift served in a regiment at Falmouth in 1814 during the War of 1812.

Falmouth’s Old Burying Ground is the final resting place for 56 soldiers from the American Revolution, nearly two dozen men who fought in the War of 1812, and three Civil War soldiers, according to Donna Walcovy, an expert at cleaning and repairing old headstones who spent about 16 years working at the cemetery.

“America the Beautiful” will be sung, with Martin’s brother, Duncan, accompanying on saxophone. Duncan Martin’s two grandchildren will lay wreaths with the Falmouth troop of Scouts BSA.

On Tuesday, the 18th of April, about half past at night Lieutenant Colonel Smith of the Royal Regiment, embarked from the Common at Boston, with the Grenadiers and Light-Infantry, of the Troops there, and landed on the Opposite side, from whence he began his march towards Concord, where he was ordered to destroy the Magazine of Military Stores deposited there for the use of an Army to be Assembled in Order to act against his Majesty and his Government, the Colonel called his Officers together and gave orders that the troops should not fire unless fired upon, and after Marching a few Miles. - Detached six Companies of light Inf." Infantry under the Command of Major Pitcairn to take possession of two Bridges on the other side of Concord, Soon after they heard many signal Guns, and the ringing of Alarm Bells repeatedly, which convinced them that the Country was rising to oppose them, and that it was a preconcerted Scheme to oppose the King's Troops, whenever there should be a favorable opportunity for it. About three O’clock the next Morning, the Troops being advanced within two Miles of Lexington, intelligence was received that about 500 Men in Arms were Assembled and determined to oppose the King's Troops, and, on Major Pitcairn Galloping up to the Head, of the advanced Companies, two Officers informed him, that a Man (advanced from those that were Assembled) had presented his Musquet and attempted to shoot them, but the Piece flashed in the pan.