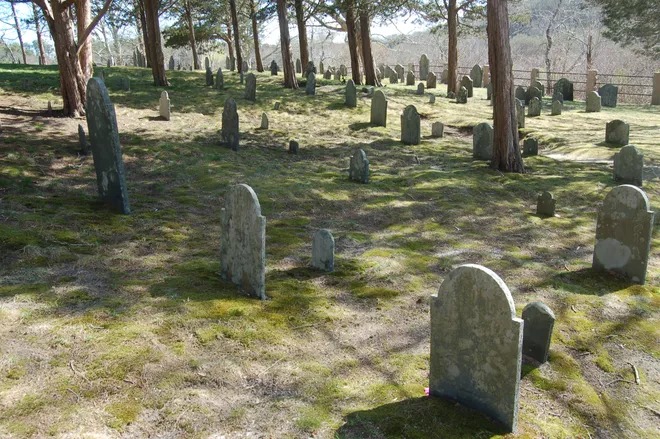 The gravesites of Revolutionary War veterans in the Sears Cemetery in Brewster. The gravesite of Freeman Remick is in the lower right.

By Rich Eldred
The Cape Codder
WickedLocal.com
11 May 2021

All of the combatants to be honored are members of the Sears family:

Edmund Sears, born in 1712, was also at the Boston Tea Party. He was the father of four other Sears who fought in the war. He married Hannah Crowell.

One son was another Edmund Sears and then there was Edward Sears, who fought under Lt. Col. Nathaniel Freeman. Elkanah Sears was another of Edmund’s sons and the home he built on School Street in 1805 still stands. John Sears invented the saltworks.

Joshua Sears sailed on the General Putnam and was taken prisoner by the British and sent to Forton Prison in England. He caught smallpox there and nearly died but returned to America and lived until 1825. Lt. Micajah Sears was born in Yarmouth and Noah Sears served in his company.

“People who fought in the Revolution fought in two different ways,” Dave Martin, a chapter member who lives in Marstons Mills said. “One was as part of the regular Continental Army. The other was as part of a militia group that would be formed when an alarm went out about the British. That pulled people from the family farms and [afterward] they would go back home.”

The nine members of the Sears family were also part of the local militia. While people associate the Revolutionary War with Boston, Lexington and Concord, Valley Forge, Ticonderoga and such, there were skirmishes in southeastern Massachusetts including two in Falmouth and in the New Bedford area.

“There were called to fight in battle in New Bedford and a battle in Falmouth. Those were the alarms they fought in,” Martin said. “They served in 1779. There was a group of British warships stationed on Naushon Island. And they plotted to come ashore and take Falmouth. A colonial spy found out about it and warned the people of Falmouth.”

The alarm was sent out.

“They got the militia together and they fired many volleys of gunfire from shore and the British changed their mind and went to Martha’s Vineyard instead.”

New Bedford was also a target.

“There were several alarms in the New Bedford area,” Martin said. “It was called Dartmouth at the time. Those affected our region. Those were some of the alarms they responded to.”

The ceremony at the cemetery in May will be limited to 25 attendees due to the persistence of COVID-19. People will be socially distant and masked.

“We have a living descendant of the Sears flying in from Oklahoma to give a talk,” Martin explained. “There will be prayers and the national anthem. We expect several descendants. And a medallion will be put next to each gravestone. And we will ask each descendant to place a flag on the medallion. A bugler will play taps. I expect a color guard will march by and they will also do a musket volley.”

One reason for the honor is to educate people about the role Cape Codders played in the Revolution. They’ve held similar ceremonies for Revolutionary veterans from Falmouth, Harwich and Provincetown.

“I have a Revolutionary ancestor myself who lived in Falmouth; Abraham Swift. He also fought in both Falmouth and New Bedford in 1779,” Martin said. “That’s what got me interested.”

The Sons of the American Revolution held meetings every few month prior to the pandemic. They’d host speakers on Revolutionary topics. The group has about 50 members. Robert Gifford of Harwich is the president, not George Washington.

You might wonder how it’s possible to track those who fought 250 years ago, especially if they were in an informal militia.

“They were on a payroll,” Martin said. “And they got a pension. So there is a pension record. There is also a published multi volume history, “Soldiers and Sailors of the Revolutionary War,” in six or seven volumes. It’s alphabetical and lists the length of service and it’s not too hard to look them up if you think you have a Revolutionary ancestor. There is a set at the Sturgis Library in Barnstable Village. ”

Message from the President General

Compatriots - On behalf of the National Society, I have written letters of support to U.S. Rep. Pete Olson (R-Texas) and Sen. Sherrod Brown (D-Ohio) for bills each is sponsoring in the U.S. House (H.R. 1209) and U.S. Senate (S. 381), respectively. The bills would provide for awarding the Congressional Gold Medal to the “Doolittle Raiders” for