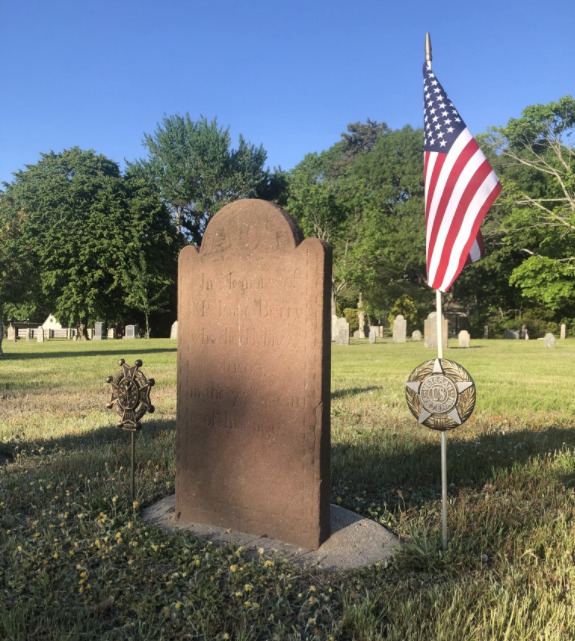 WEST YARMOUTH — To say that Revolutionary War soldier Isaac Berry of Yarmouth lived his 75 years to the fullest would be an understatement.

The militiaman who took up his musket and powder at age 50 to fight the British was also a landowner, constable, attorney, sea captain, business owner and the father of 18 children — nine each by his first and second wives, both named Sarah.

As intriguing as his story is, the details went largely unknown for centuries.

“Nobody had claimed this man,” said J. Duncan Berry of Harwich, who said Isaac Berry is his sixth great-grandfather.

That changed Saturday morning, when approximately two dozen Berry descendants from as far away as Florida, California and Colorado — some of whom had never met each other — gathered at Isaac Berry’s redstone marker in Woodside Cemetery to honor their ancestor with a special ceremony put on by the Cape Cod Chapter of the Sons of the American Revolution.

There was ceremonial musket volley by members of the Yarmouth militia, a dedication of a new bronze marker and a wreath-laying by members of Yarmouth and Dartmouth Boy Scout troops, including three young Berry descendants.

“You’re not washashores,” Armstrong said. “I welcome you home.”

Duncan Berry said he started researching the life of his forbear Isaac Berry after coming across some information about his war service on Ancestry.com.

After taking a selfie with his brother at Isaac’s 2-foot-high grave marker in West Yarmouth two years ago, Duncan Berry said the two talked about doing something for the 240th anniversary of Berry’s 1778 entrance into the American War for Independence.

After the ceremony, the Berry descendants gathered at the Capt. Bangs Hallett House in Yarmouth Port for a family reunion.

Berry descendant Mark Rowe of Sarasota, Florida, said he had planned to be in the area to visit his daughter Nichole Rowe of Hopkinton when he heard the story of Isaac Berry and of plans for a family reunion.

“It was perfect timing,” Rowe said, adding that learning the history of Isaac Berry was “all new.”

Some Berry descendants in their teens and 20s said the ceremony made them interested in joining the Sons or Daughters of the American Revolution.

Duncan Berry said he’s happy his ancestor is getting time in the spotlight — even 215 years after his death.