The Ideological Origins of the American Revolution 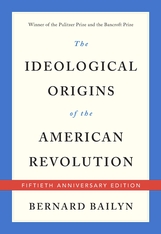 The Ideological Origins of the American Revolution, awarded both the Pulitzer and the Bancroft prizes, has become a classic of American historical literature. Hailed at its first appearance as “the most brilliant study of the meaning of the Revolution to appear in a generation,” it was enlarged in a second edition to include the nationwide debate on the ratification of the Constitution, hence exploring not only the Founders’ initial hopes and aspirations but also their struggle to implement their ideas in constructing the national government.

Now, in a new preface, Bernard Bailyn reconsiders salient features of the book and isolates the Founders’ profound concern with power. In pamphlets, letters, newspapers, and sermons they returned again and again to the problem of the uses and misuses of power—the great benefits of power when gained and used by popular consent and the political and social devastation when acquired by those who seize it by force or other means and use it for their personal benefit.

This fiftieth anniversary edition will be welcomed by readers familiar with Bailyn’s book, and it will introduce a new generation to a work that remains required reading for anyone seeking to understand the nation’s historical roots.

“In every area of Bernard Bailyn’s research—whether Virginia society of the 17th century or the schools of early America—he transformed what historians had hitherto thought about the subject. In The Ideological Origins of the American Revolution, the most famous of his works, Bailyn uncovered a set of ideas among the Revolutionary generation that most historians had scarcely known existed. These radical ideas about power and liberty, and deeply rooted fears of conspiracy, had propelled Americans in the 1760s and 1770s into the Revolution, Bailyn said. His book, which won the Pulitzer and Bancroft prizes in 1968, influenced an entire generation of historians. For many, it remains the most persuasive interpretation of the Revolution.”—Gordon S. Wood, The Wall Street Journal

“One cannot claim to understand the Revolution without having read this book.”—The New York Times Book Review

“A distinguished achievement. Mr. Bailyn writes with the authority and integrity that derive from a thorough mastery of the material. His meticulous scholarship is matched with perceptive analysis.”—The New York Review of Books

“Tightly written and politically sophisticated… In the field of American Revolutionary Studies, Bailyn’s book must henceforth occupy a position of first rank.”—Saturday Review

“The most brilliant study of the meaning of the Revolution to appear in a generation.”—History

“With this reading of the American Revolutionary Experience, Mr. Bailyn has substantially and profoundly altered the nature and direction of the inquiry on the American Revolution. In the process he has also erected a new framework for interpreting the entire first half-century of American national history… A landmark in American historiography.”—American Quarterly