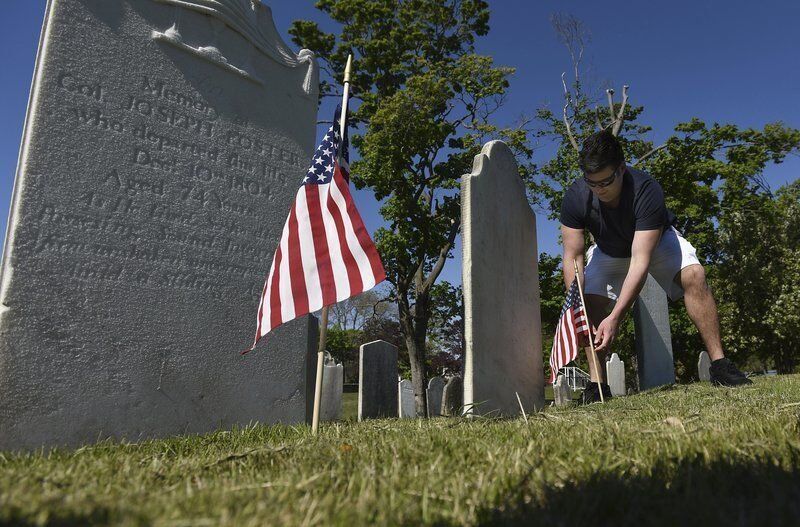 PAUL BILODEAU/Staff file photo. Gloucester firefighter and Navy veteran Sean Ellis plants a flag on veteran’s 1804 grave at First Parish Burial Ground in Gloucester for Memorial Day earlier this year. A marker listing soldiers and sailors buried there will be unveiled in October.

What: Unveiling of a plaque listing 38 soldiers and sailors buried at First Parish Burial Ground in Gloucester.

Where: First Parish Burial Ground, 122 Centennial Ave. Parking is in the Oval Playground off Morton Place.

How much: Free but reserve your space here due to pandemic rules on social gatherings. Face masks are required.

Revolutionary War veterans buried in Gloucester’s First Parish Burial Ground will be honored with a plaque next month.

The Massachusetts Society of the Sons of the American Revolution (MASSAR) will unveil its inaugural plaque honoring the 38 soldiers and sailors who fought in the Revolutionary War between 1776 and 1783 on Oct. 10 at First Parish, said Sandy Barry of the Gloucester City-Owned Cemeteries Advisory Committee.

MASSAR has undertaken a program to place plaques at cemeteries across the state to commemorate and honor those buried in them who fought in the American Revolution, according to Joseph Gauthier, MASSAR’s awards and medals chairman. He said he spent more than a year talking with Gloucester officials to get approval for the $3,300 plaque, a process interrupted and slowed by the coronavirus pandemic

The bronze plaque, measuring 3 by 3 feet, will list the names of all 38 Revolutionary War soldiers and sailors buried at First Parish, and will be placed to the right of the Centennial Road entrance.

Gauthier said MASSAR, which raised the money for the plaques, will place the next one at a Marlborough cemetery and will move around the state county by county before circling around again. “It may take 50 years,” he said. “It’s a lot of work.”

Gloucester has two other cemeteries where Revolutionary War dead are buried, he said.

“Something I’ve been thinking about is that they say a soldier dies twice. Once when they’re put in the ground, and then when people stop saying their name,” Gauthier said. “What this plaque will do is keep people saying their names. They may read Townsend, and say ‘I knew a Townsend, I wonder if they’re related,’ or family 10 generations removed may come to see it and say the names. The names on the plaque will keep them going on for generations.”

Gauthier said he chose First Parish to be the site for the inaugural plaque based on something he read, but could not be specific.

Barry noted that First Parish is the city’s oldest burial ground and much is written and posted on social media about the continual work going on to keep it in shape. For instance, the Times wrote about Henry Jacques’ Eagle Scout project to clean, restore and mark graves, including some Revolutionary War stones, in 2019, and cemetery caretakers have been awarded grants from the state Historical Commission and city Preservation Committee for the burial ground’s maintenance.

The cemetery, opened in 1644, is also the final resting place of the likes of Isabel Babson, recognized as Gloucester’s first midwife, working in the 1600s when midwifery was sometimes considered witchcraft, and Miles Barnes, captain of the vessel Industry that shipwrecked off Good Harbor near Salt Island in 1796.

The plaque unveiling at First Parish will take place at 10 a.m. on Oct. 10. Dignitaries from the city of Gloucester, Gloucester Veterans Services, Gloucester City-Owned Cemeteries Advisory Committee members Barry, Chris Maney, and Carol A. Kelly, MASSAR members, and the society’s Henry Knox Color Guard will be in attendance. The plaque will be presented to the City of Gloucester by MASSAR State President Edgar Hoak and Gauthier. The color guard will fire a three-volley salute in honor of those who fought for our freedom.

Social distancing will be observed and face masks are required. Because of state restrictions on the size of a gathering, RSVPs are requested and may be made here.

Parking for the First Parish Burial Ground is in the Oval Playground off Morton Place.

Andrea Holbrook may be contacted at 978-675-2713 or aholbrook@gloucestertimes.com.

Dedham man to get belated recognition for service in the Revolution

A Dedham man who marched against the Redcoats during the battles of Lexington and Concord will be honored this Saturday in a hometown ceremony initiated by a descendant from across the country.

George Lipphardt, a genealogy buff from Tucson, Ariz., will travel to Dedham to see the Sons of the American Revolution place a marker at the grave of Captain Joseph Lewis, Lipphardt's fifth-great grandfather.

"In order to join the organization, you have to be able to prove you had an ancestor that participated in the revolution against England," Lipphardt said of the Sons of the American Revolution, counterpart to the more

Judge Hiller B. Zobel to speak at Yorktown Celebration

The Honorable Hiller B. Zobel to speak at Yorktown Celebration John Adams’ Ethical Dilemmas in…