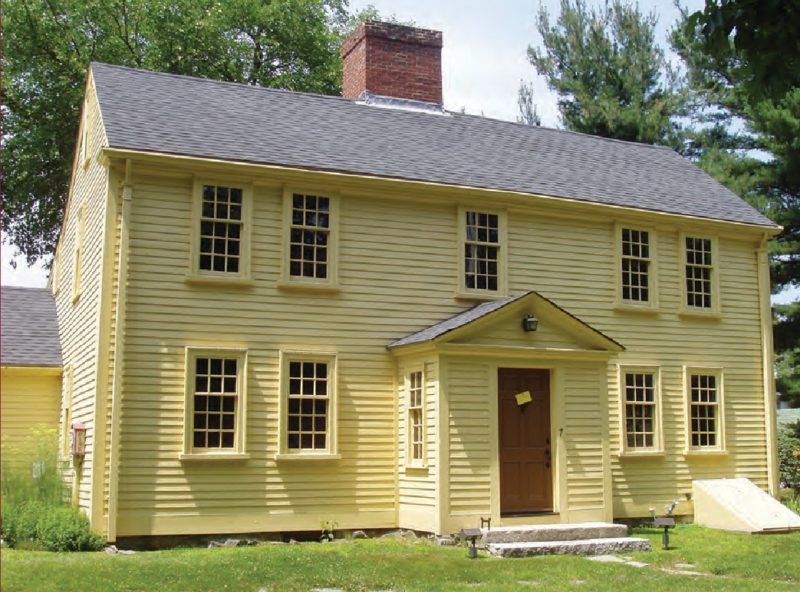 While there are disagreements about the starting date of the Revolutionary War and the first battle, April 19, 1775, is recognized as the signature event for the conflict. Gen. Thomas Gage — under guidance he was given on April 14, 1775 (written Jan. 27, 1775) from the British Secretary of State William Legge, Earl of Dartmouth — he sent soldiers of the Crown Forces to disarm rebels and imprison leaders in Massachusetts.1 They were met with armed resistance at Lexington and Concord on April 19. The initial Crown Forces Regulars, under Lt. Col. Francis Smith, sent on the raid came under constant fire from gathering local militia. A relief force from Boston under Brigadier Earl Hugh Percy’s First Brigade was sent to reinforce and extract Lt. Col. Smith’s raiding party.

The village of Menotomy, Mass. (now Arlington), was named for the Algonquin word for “swift running water.”2

“Menotomy was just a wide place in the road, a little village strung along for about a mile from Foot of the Rocks to Spy Pond, but it was a crossroads where routes coming into Boston from the north and west intersected … All roads, as it turned out, led to Menotomy when the purpose was to intercept the Regulars.”3

The old men of Menotomy captured the Redcoat Regulars’ powder supply wagons and 18 soldiers (according to the citation on the local historical marker).4

Brigadier Earl Percy’s First Brigade was sent by Gen. Gage to reinforce Lt. Col. Smith’s Force on a raid to Lexington and Concord. Behind his brigade followed two supply wagons with gunpowder and a 12-man guard trying to catch up with Percy’s force. In Menotomy, a group of men, too old to be fit for active service, gathered on the main road after Percy’s Brigade of regulars marched through. All were armed, and some were French and Indian War veterans. These included David Lamson, who was half-Indian and half-African; Ammi Cutter; Jason and Joseph Belknap; James Budge; and Israel Mead, who were seeking an opportunity to interdict stragglers from Percy’s column. Hiding behind a stone wall, they fired on the first wagon and killed the driver and a horse (other sources list two sergeants, more horses killed and an officer wounded.5). The guards surrendered. (Local lore says six regulars threw their muskets in a nearby pond and surrendered to an old woman in her garden.)

They then captured the second wagon. The powder was provided to passing militia, and the captured wagons, equipment, horses and Redcoat Regulars were moved. Later, a commandeered chaise with Redcoat Regular Lieutenant Edward Thoroton Gould — who was part of Lt. Col. Smith’s force and was wounded in the foot at Concord Bridge — was intercepted and captured by this same group of old men. 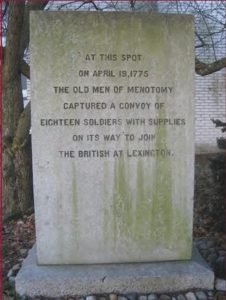 “It is no wonder that Percy and Smith were astounded by the number of troops the province was able to muster at Menotomy only three hours after Percy passed through the empty town … There were as many minute men and militia waiting for him in Menotomy as there were to his rear and on the flanks.”6

“The minute men and militia waiting in the town were operating under one great disadvantage: they had not seen the Regulars column, and they assumed that it would come down the main road in a tight formation, just as the Regulars had marched in all their earlier excursions out of Boston. The strong Regular flank patrols employed by Percy were a deadly surprise to many of the provincial companies that were situated too close to the road and were caught between the flankers and the main column. This mistake proved costly to several rebel units, including the minute men company from Danvers commanded by Lt. Gideon Foster.” They lost seven men at the Jason Russell house.7

On the south side of the road passing through Menotomy, 58-year old Jason Russell’s yellow-painted house was the scene of intense fighting as militia fought Redcoat Regulars. Russell, lame and barely able to walk, sent his family to safety and determined to defend hearth and home. Old Ammi Cutter, one of the group of exempts who had captured the wagons earlier in the day, lived across the street from Russell. Cutter, one of the few men there who had already fired his musket at the Regulars that day, was out on the road at this time, and he saw Russell come out of the house, musket in hand. Cutter thought his old friend was taking things a bit too far. He tried to tell Russell that the battlefield was no place for an old man, but Russell, who was piling bundles of shingles into a makeshift wall near his front door,8 answered simply, “An Englishman’s home is his castle.”9 Some militia and minutemen joined him. When Russell’s body was found, he had been shot twice and had 11 bayonet wounds. Eleven other Patriot militia and two Redcoat Regulars died in the Russell house, others in the yard. The struggle raged from the attic to the cellar in the house. It is now a museum and still has bullet holes in some of the rooms.

Samuel Whittemore served in the Queen Dragoons, in both the King George’s War and the French and Indian War. Born in England in 1695, he fought native warriors in the Indian Wars of 1763. He then settled in the Massachusetts Colony. As the fighting started in Lexington and Concord in 1775, he watched Crown Forces retreating toward Menotomy from his home. He took all his weapons, a brace of pistols, an old cavalry saber, a musket and a powder horn and “told his wife he was going up town to meet the regulars.”10 He engaged Redcoat Regulars of Col. Nesbitt’s 47th Regiment. He shot three at point-blank range, drew his saber and started slashing at the approaching bayonets. Whittemore was shot in the face, was butt-stroked and received multiple bayonet wounds before being left for dead. When townspeople went to collect his body, they found Whittemore reloading his musket to continue the fight. He was taken to a local tavern, where doctors believed his 14 wounds were mortal and sent him home to his family to die. Samuel Whittemore lived to the age of 98 and passed in February 1793, the oldest Revolutionary War combatant. His marker is in Arlington, Mass.

“The repeated bayonetting of Russell and Whittemore is one indication of the fierceness that characterized the fighting at that point. To the Regulars, the rebels were cowardly snipers who fired from hiding and who lurked along the edges of the column like wolves, ready to kill and scalp wounded men who had to be left behind; while to the militia and Minutemen, the Regulars were brutal ravagers who burned and looted their way across the countryside.”11

Each village along Battle Road has legends and stories about local Patriots who on that significant day of April 19, 1775, rose to the occasion. Those who were exempted from active military service because of age or infirmity or who were not white males, were among those who stepped forward. May their sacrifices and valor be forever remembered.

Brett Osborn is chairman of the NSSAR Reenactor & Living History Liaison Committee and the Col. James Wood II Chapter of the Virginia Society.

250th Series: The Bill of Rights