The Massachusetts Society
Sons of the American Revolution
February 2020

The Cape Cod Chapter the Massachusetts Society held a special ceremony on November 16, 2019 at the 400 East Restaurant in Harwich to honor local emergency response professionals with the SAR Public Service and Heroism Awards. The event was organized by Terry Murray, Vice President and Bob Gifford President. 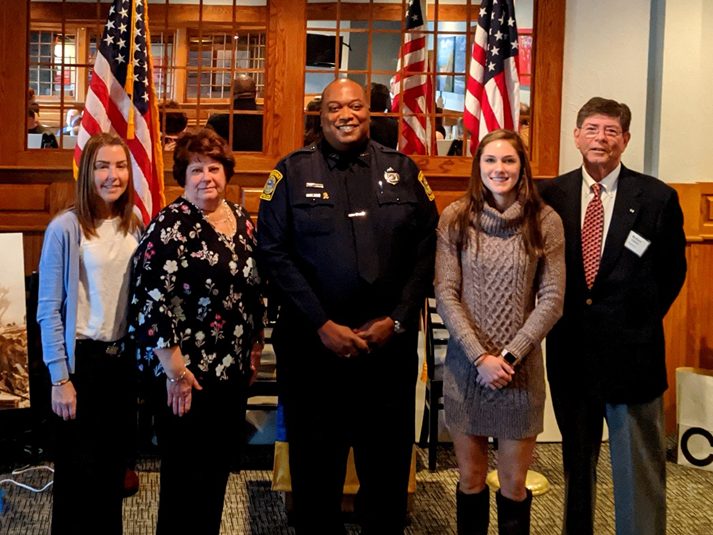 Barnstable police Officer Brian Morrison, received the Law Enforcement Commendation Award. He is assigned to the Hyannis Youth & Community Center. He has volunteered at the Kiwanis Club of Hyannis for 23 years as well as the annual Festival of Trees event, the Barnstable Police Department’s Kids Day and the annual Father’s Day Car Show on Main Street, Hyannis. 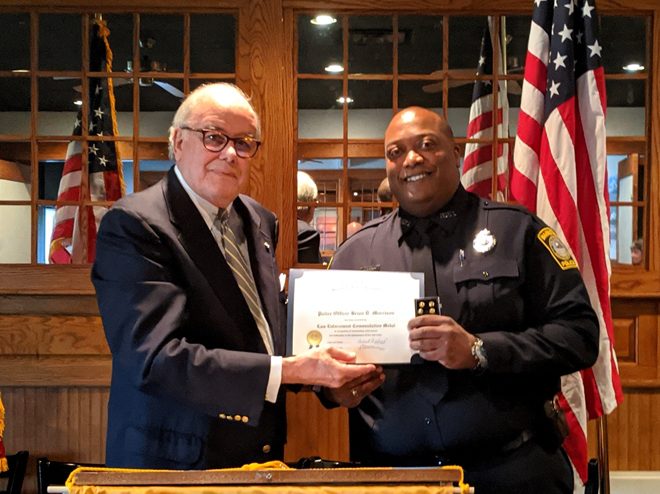 Hyannis Fire Capt. Thomas Kenney was posthumously awarded the Fire Safety Commendation. Capt. Kenney was the first paramedic supervisor at the Hyannis department and as a dive master, started the Hyannis Fire Dive Team. In all, he gave 45 years of public service, 37 of those with the Hyannis Fire Department. He passed away in June. His wife, Kathleen Kenney, accepted the award on his behalf. 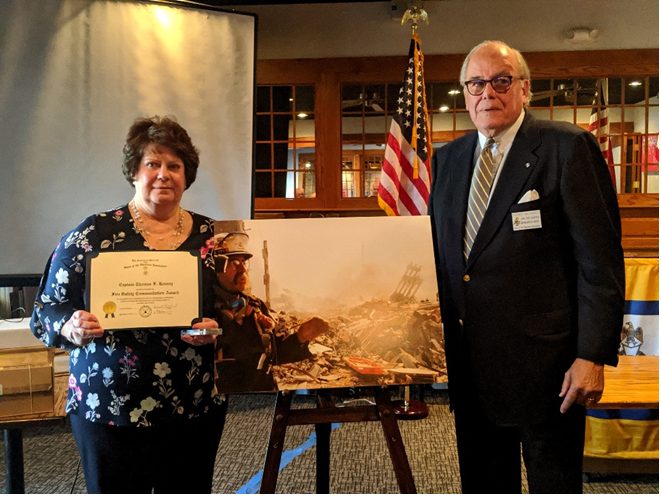 Hyannis Fire Lt. Richard Knowlton was posthumously awarded the EMS Commendation for his 37 years of service with the Hyannis Fire Department’s Cape and Islands Emergency Medical Services which he later co-directed. Knowlton, 59, died of cancer in August 2018. Crissy Knowlton, his wife, accepted the award on his behalf. 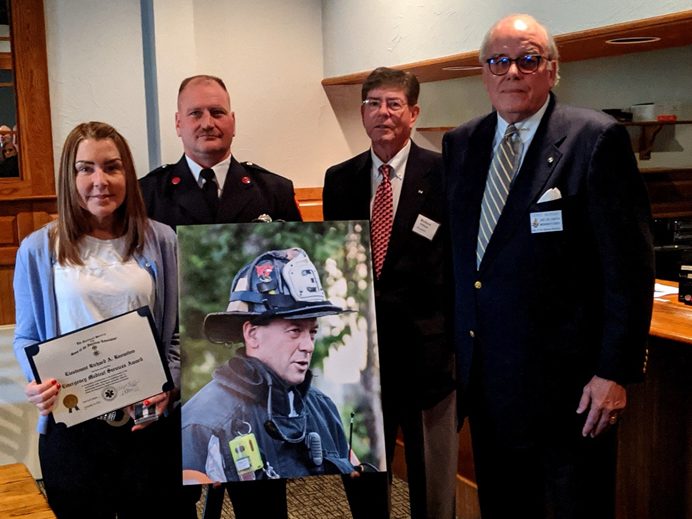 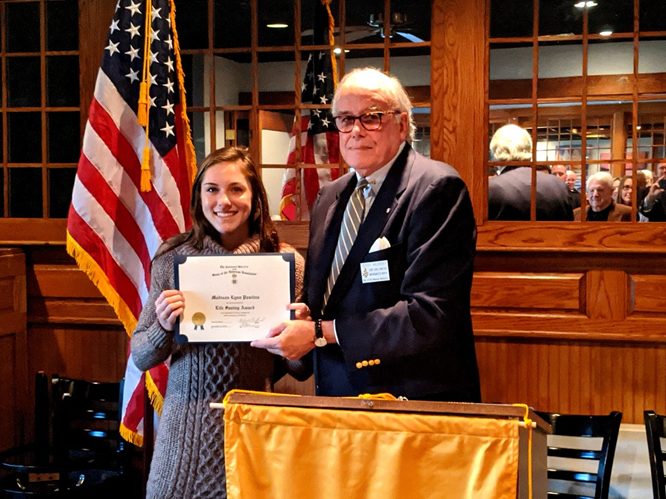 Longtime local lifeguard Madison Pawlina was presented with the Life Saving Award for carrying out seven rescues at beaches in Dennis since her first year in 2014.

Veterans Day 2019 was commemorated in the City of Presidents, Quincy Mass, with the Annual Veterans Day Parade. Participating in the event was MASSAR’s own Col. Henry Knox Regimental Color Guard. The parade in downtown Quincy stepped off on Russell Park by Quincy High School and proceeded up to Hancock Street passing by the WWI Memorial Doughboy Statue. From there it continued on past Veterans Memorial Stadium and onto the Southern Artery to Merrymount Park finishing at the WWII Memorial. Lt. Comm. Ryan Seggerty, Commanding Officer of Navy Operational Support Center Quincy, was the keynote speaker. 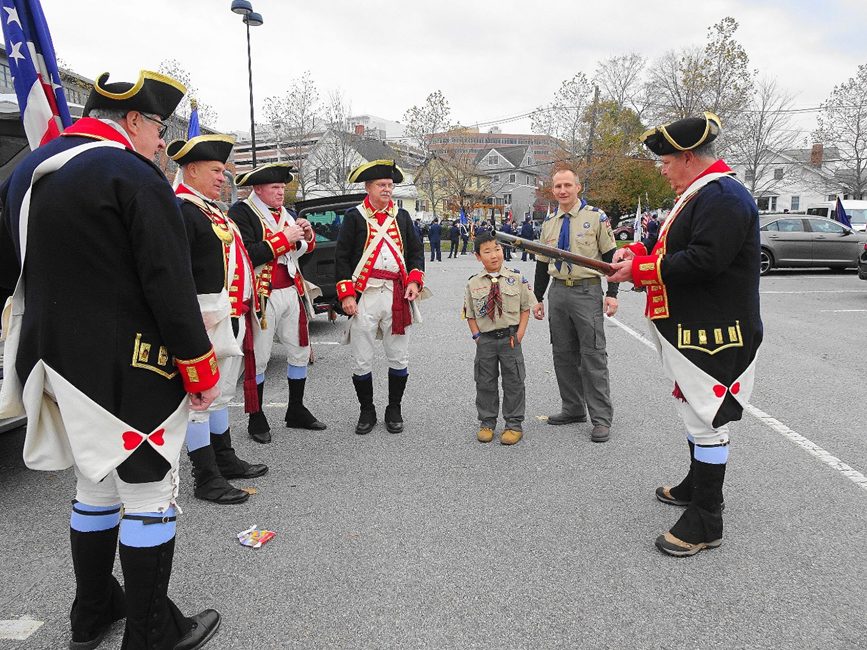 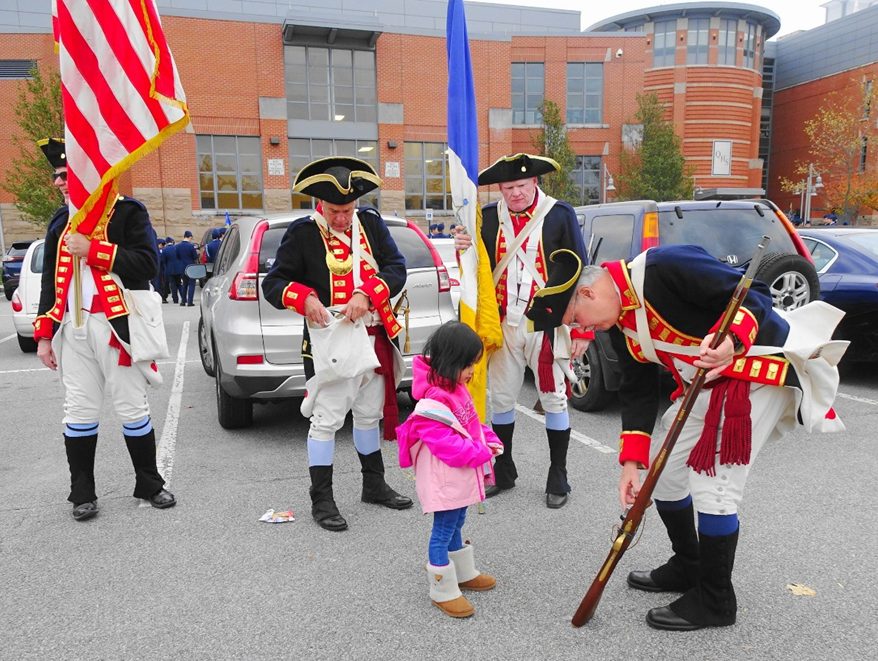 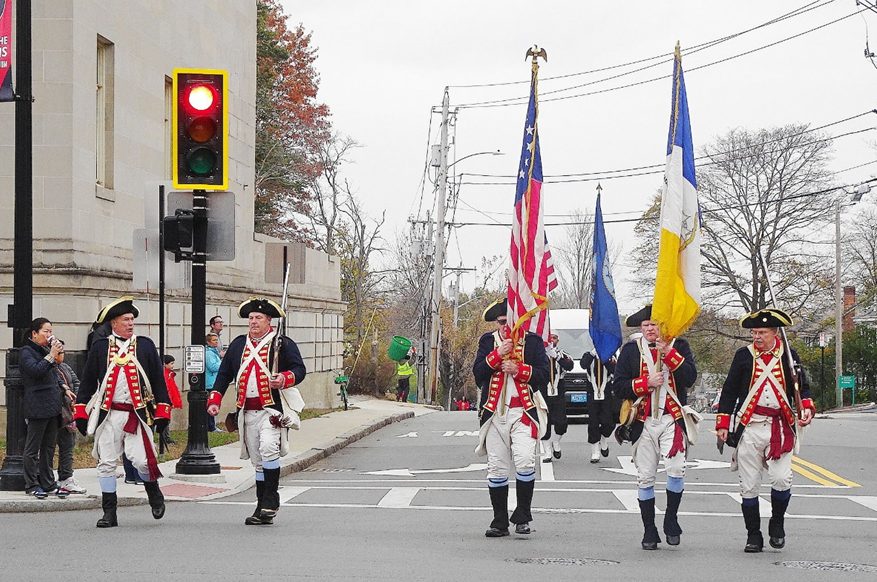 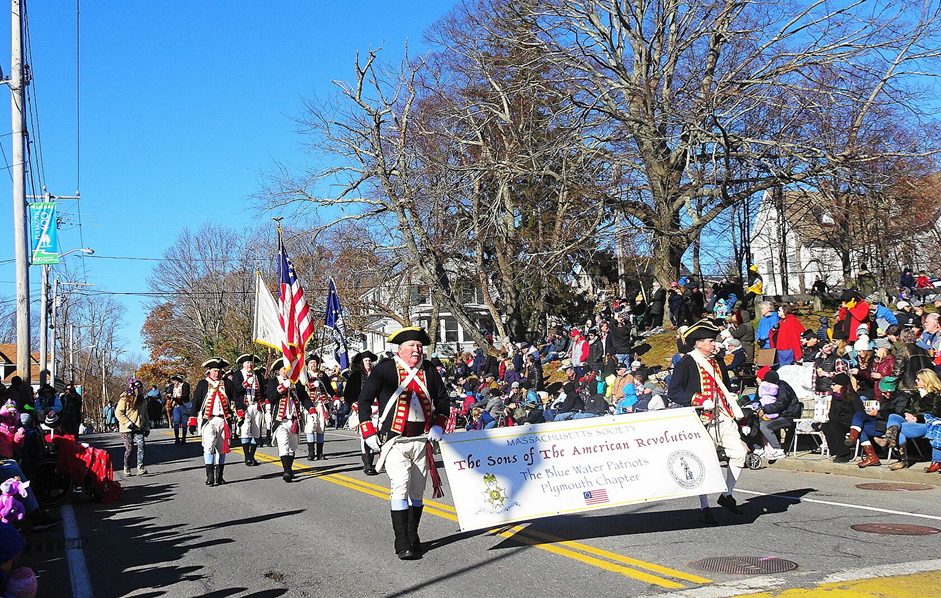 The Col. Henry Knox Regimental Color Guard of the Massachusetts Society in the Thanksgiving Parade in Plymouth. 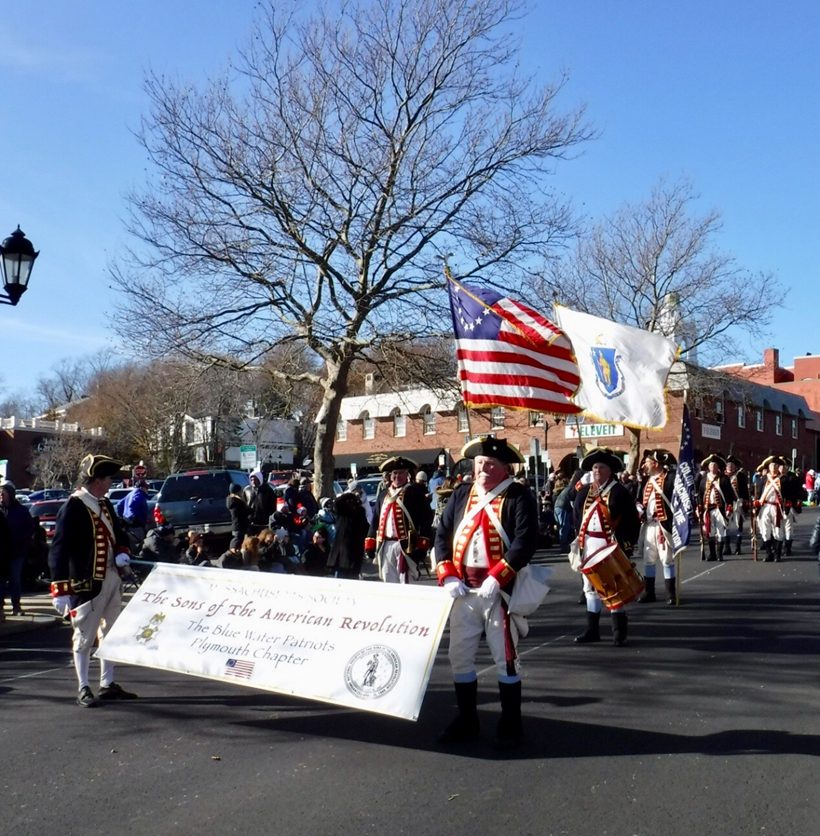 The Knox Color Guard at a stop during the Thanksgiving Parade. 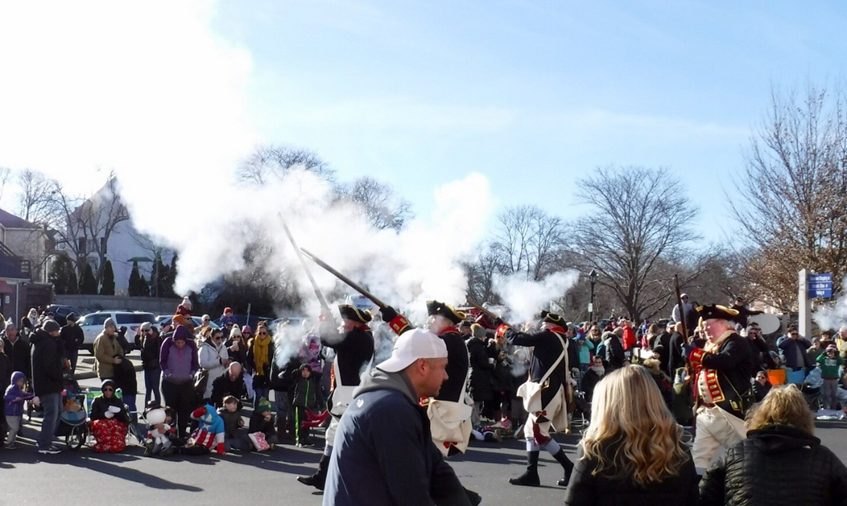 The Knox Color Guard firing one of several musket volleys.

We wish to thank Compatriot Charles Stockbridge for his facilitating the inclusion of the Knox Color Guard’s participation in the parade. Also a big thank you to Dick Jarvis and Steve Green for providing host chapter hospitality with a shuttle service to and from the off-site parking area and a delicious hot lunch of sandwiches and homemade chili, set up for after the parade in Stevens Field. 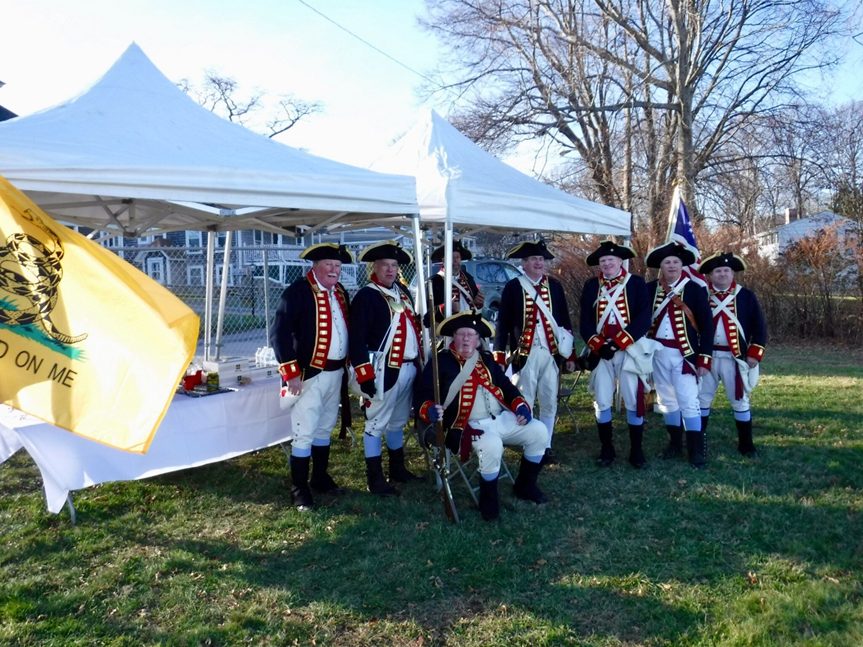 The Knox Color Guard at ease after lunch.

On Saturday, December 14, 2019, The National Wreaths Across America Day of Remembrance was observed by the Col. William Henshaw Chapter, (Worcester) at Hope Cemetery. At the invitation of Chapter President, Chris Tourtellot, and event organizer, Allan Van Wert, the Col. Henry Knox Regimental Color Guard of the Massachusetts Society SAR joined the Massachusetts C.A. R., along with cadets from the Civil Air Patrol of Worcester, South High Schools Color Guard and Cub Scout Pak 53 of Auburn and many other volunteers to lay wreaths at Veterans graves. Following the ceremonies in the cemetery, the chapter reconvened in downtown Worcester to lay a wreaths at the Bigelow Monument and Korean War Memorial. 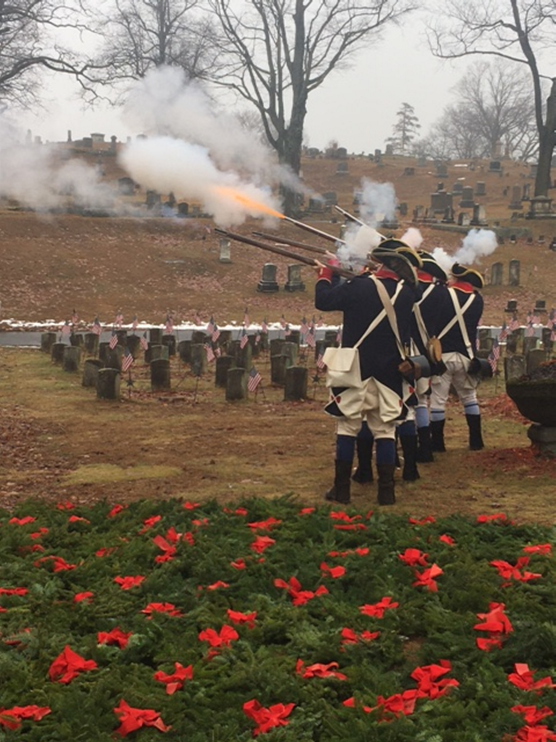 The Knox Color Guard fires a salute to our Veterans interred at the Hope Cemetery in Worcester. 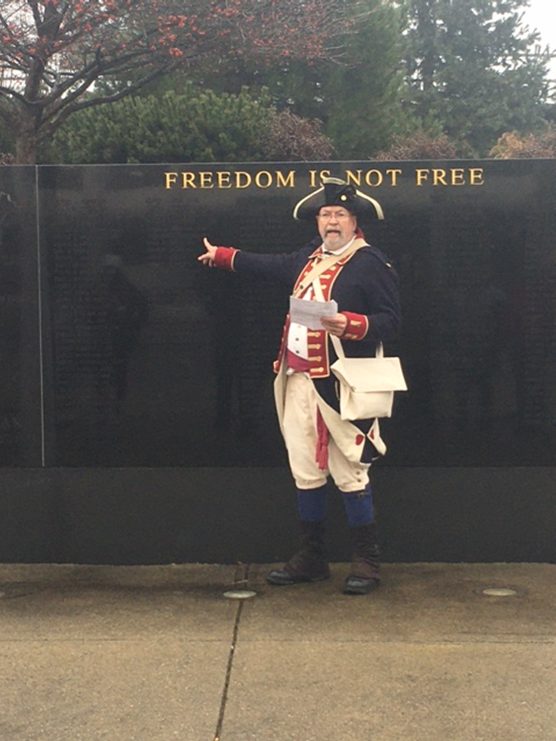 Allan Van Wert shows the name of his uncle on the Korean War Monument in downtown Worcester.

The Boston Chapter held a meeting on January 4, 2020 at the New England Historical Genealogical Society on Newbury Street in Boston. Before the meeting, a reception in honor of the National Society SAR President General Jack Manning and First Lady Sheila Manning was held in the historic first-floor rotunda. Boston Chapter President Andrew Schell called the meeting to order at 10:25 am. He welcomed the members, prospective members, and guests in attendance. 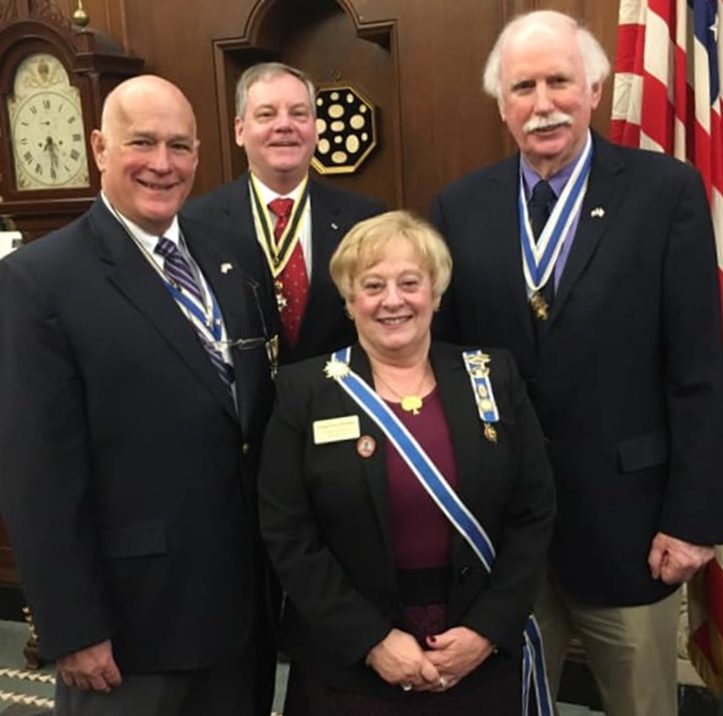 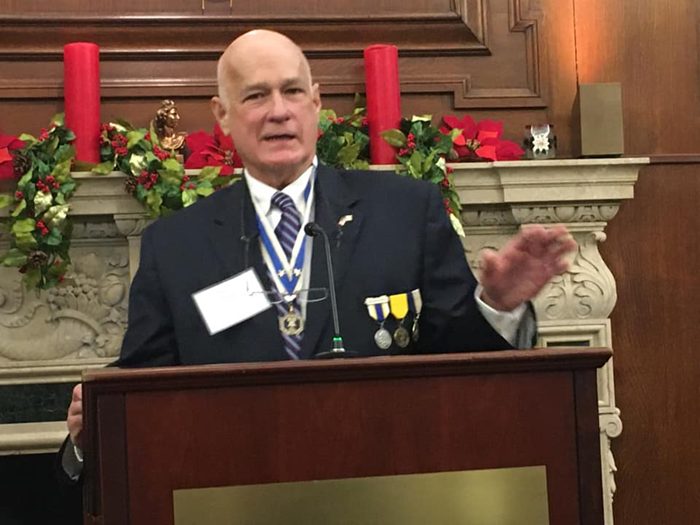 The State Regent of the Massachusetts Daughters of the American Revolution, Paula Renkas, brought greetings on behalf of the DAR. Other DAR officers in attendance were State Vice Regent, Carolyn Nutt; and Regent of the Boston Tea Party Chapter, Peggy O’Connor. 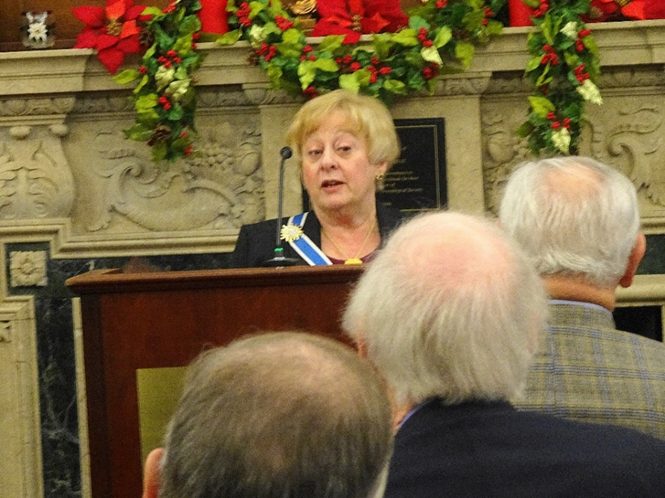 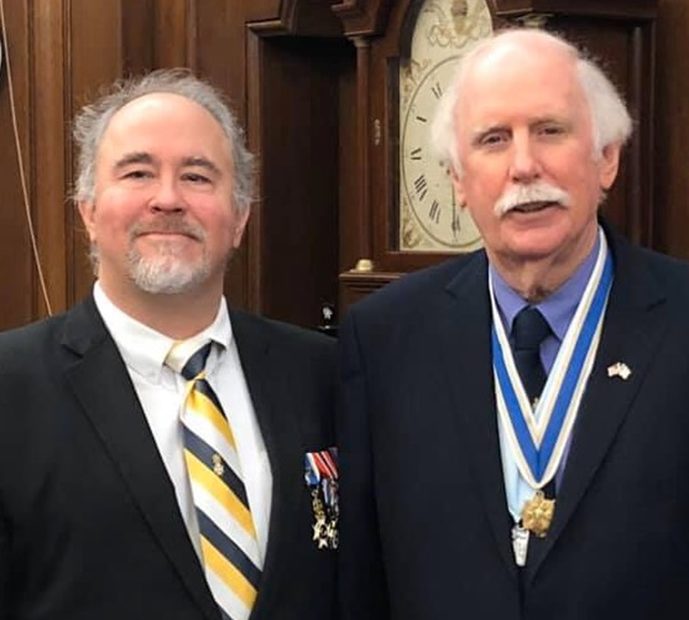 In the highlight of the morning, Special Guest of Honor, PG Jack Manning described the journey that took him from joining the Boston Chapter in 1994 to election to the top office in the National Society 25 years later. After announcing that NSSAR now has 38,056 members, he provided an update on the National Headquarters in Louisville, Kentucky, and plans for the Society’s new Education Center. He also encouraged members to attend the 130th Annual Congress in July 2020 in Richmond, Virginia. 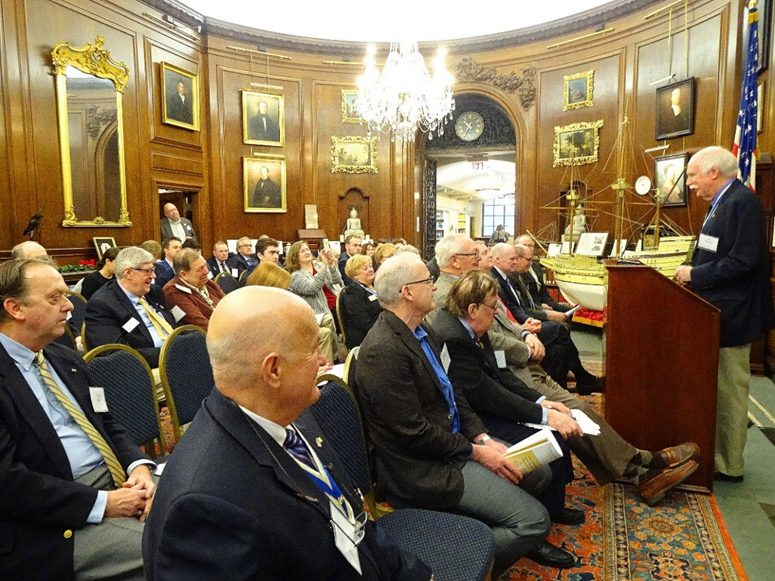 National Society of The Sons of the American Revolution President General Jack Manning addresses the membership. 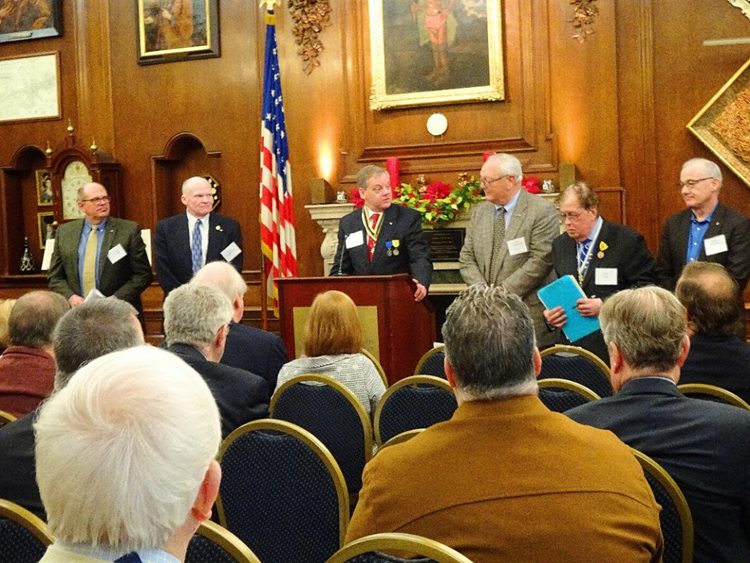 Later in the program, Registrar Dan Kraft read the names of four new members and their Patriot Ancestors. The inductees came forward and President Schell presented their certificates. PG Manning conducted the Induction Ceremony, after which the Sponsors placed the SAR Rosette on the lapel of each inductee. New members being inducted were Bennett Austin Malbon III, William Jackson Malbon, Liam Christopher McGuire, and Maxwell Ryan McGuire. Congratulations to our newest Boston Chapter members! 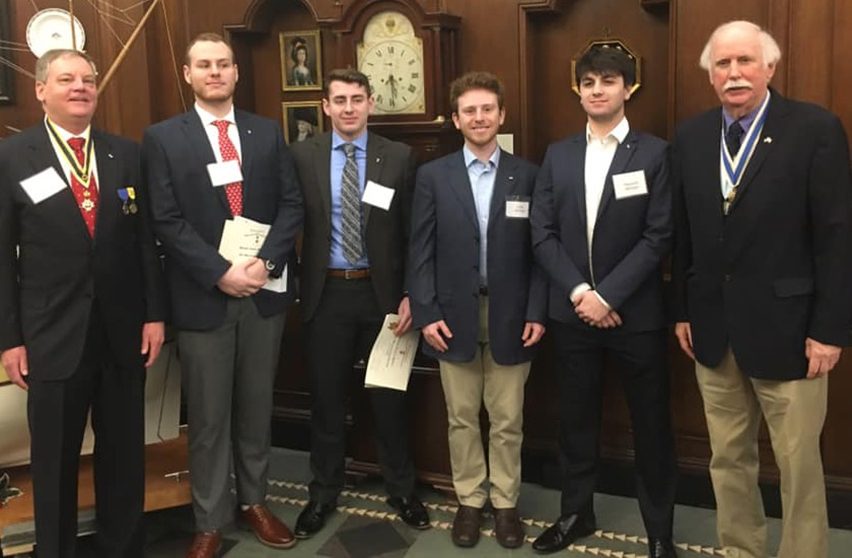 In a well-deserved honor, State President Bob Bossart, assisted by PG Manning, presented the Patriot Medal to Past Chapter President and current Secretary and Registrar, Dan Kraft. This award is presented to a member who has rendered long, faithful, and outstanding service on the state and chapter level. HUZZAH for Dan! 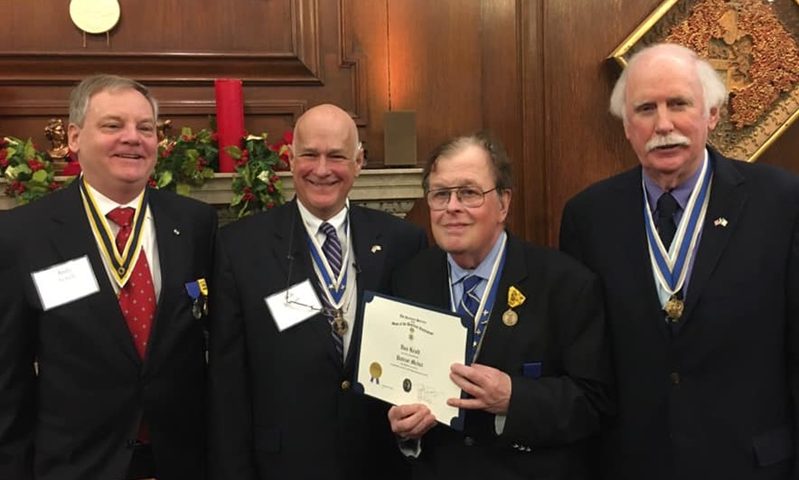 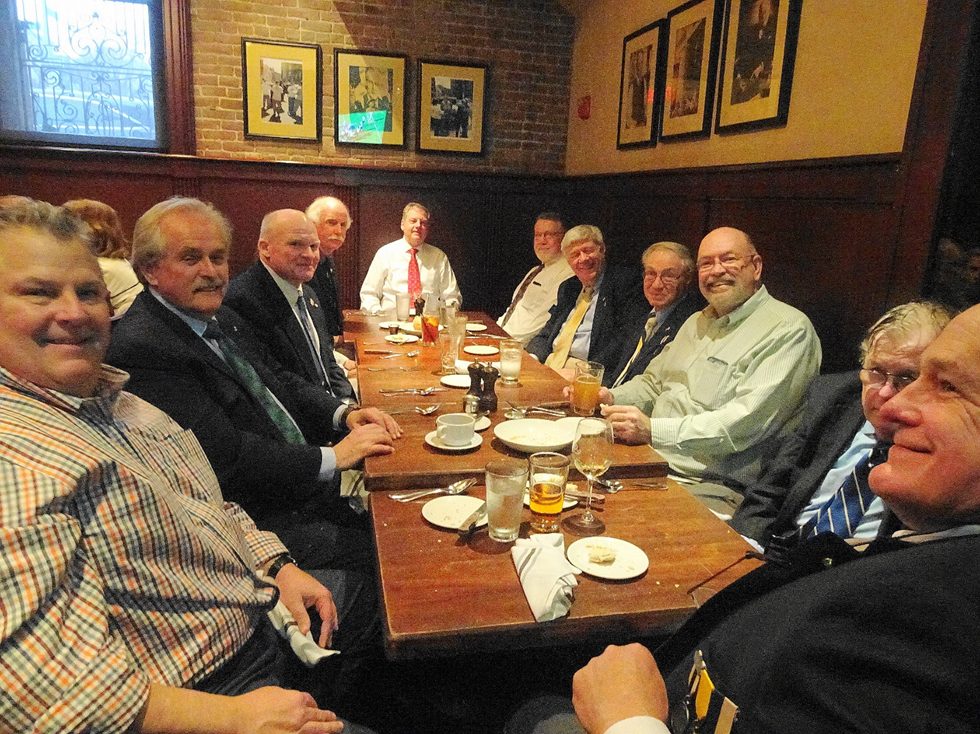