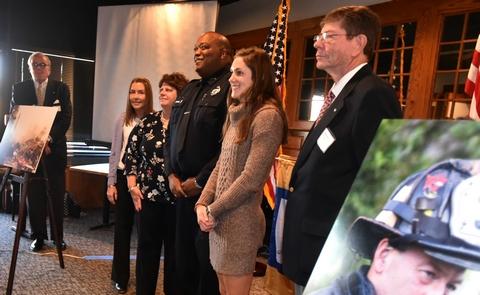 HARWICH — It was a heartwarming afternoon as friends and family gathered Saturday to salute the first recipients of the Public Service & Heroism Awards.

Hosted for the first time by the Massachusetts Society of the Sons of the American Revolution, Cape Cod chapter, the ceremony at the 400 East restaurant honored those in public service organizations throughout the Cape for their heroic community service. 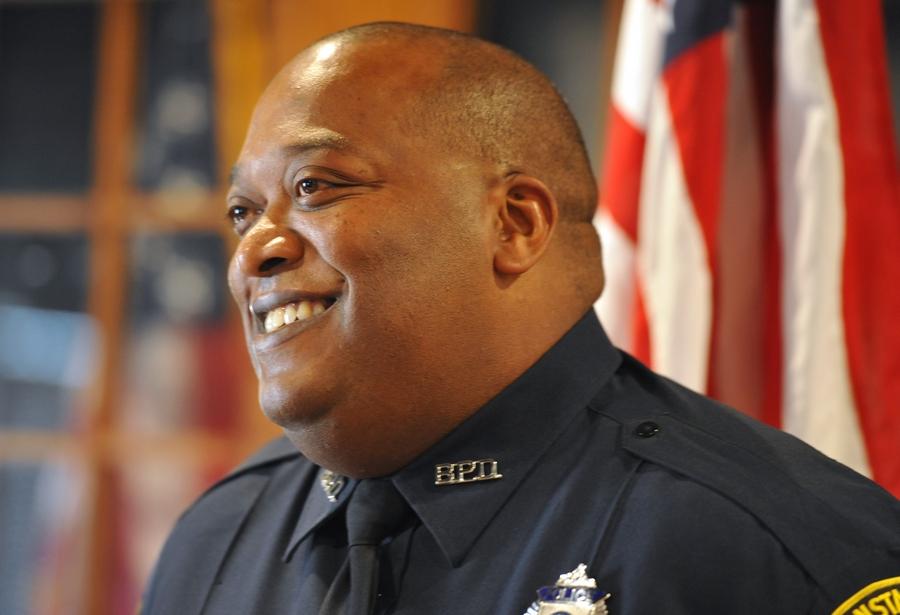 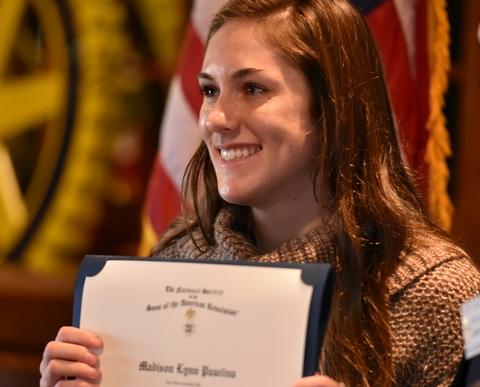 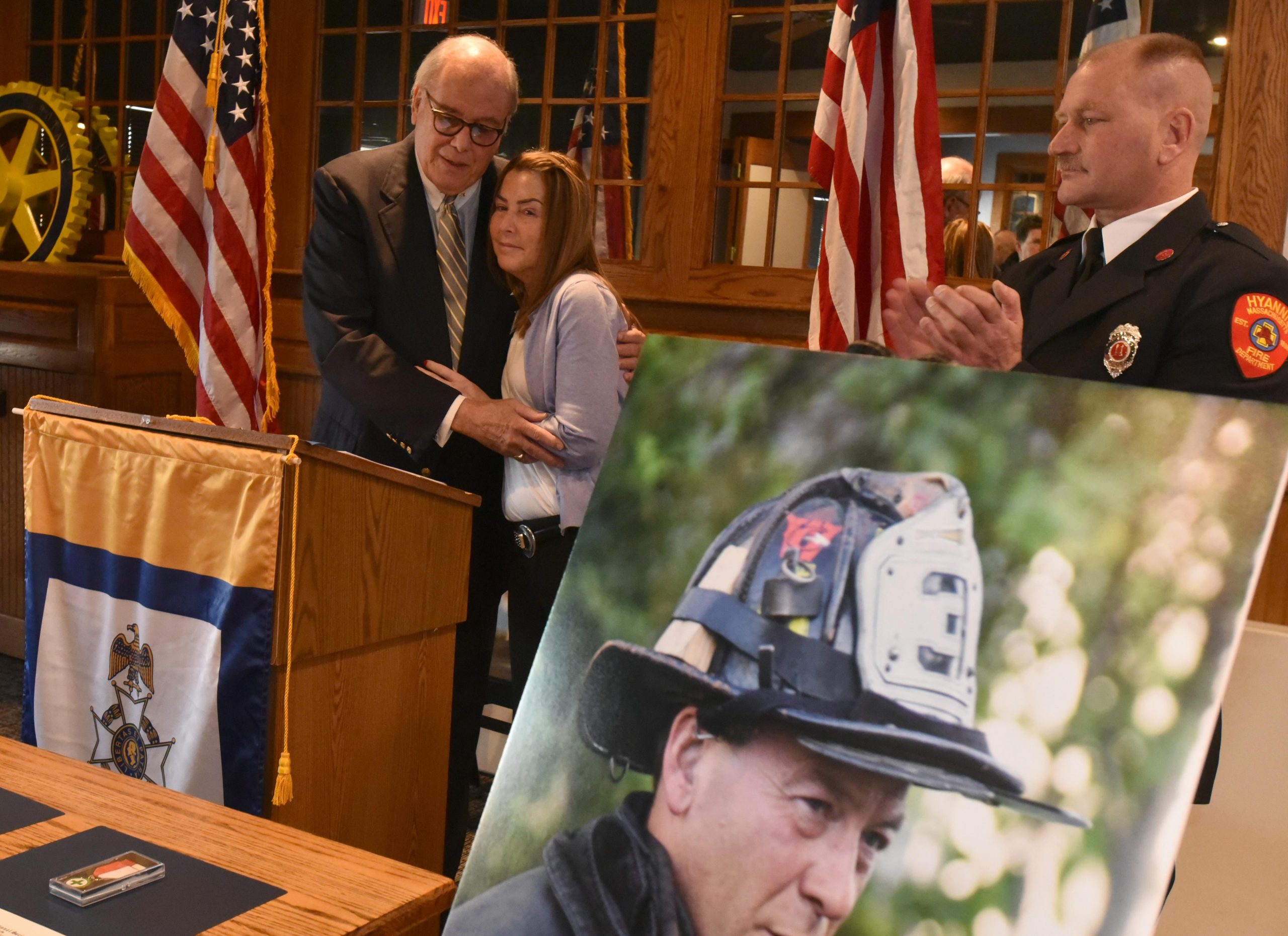 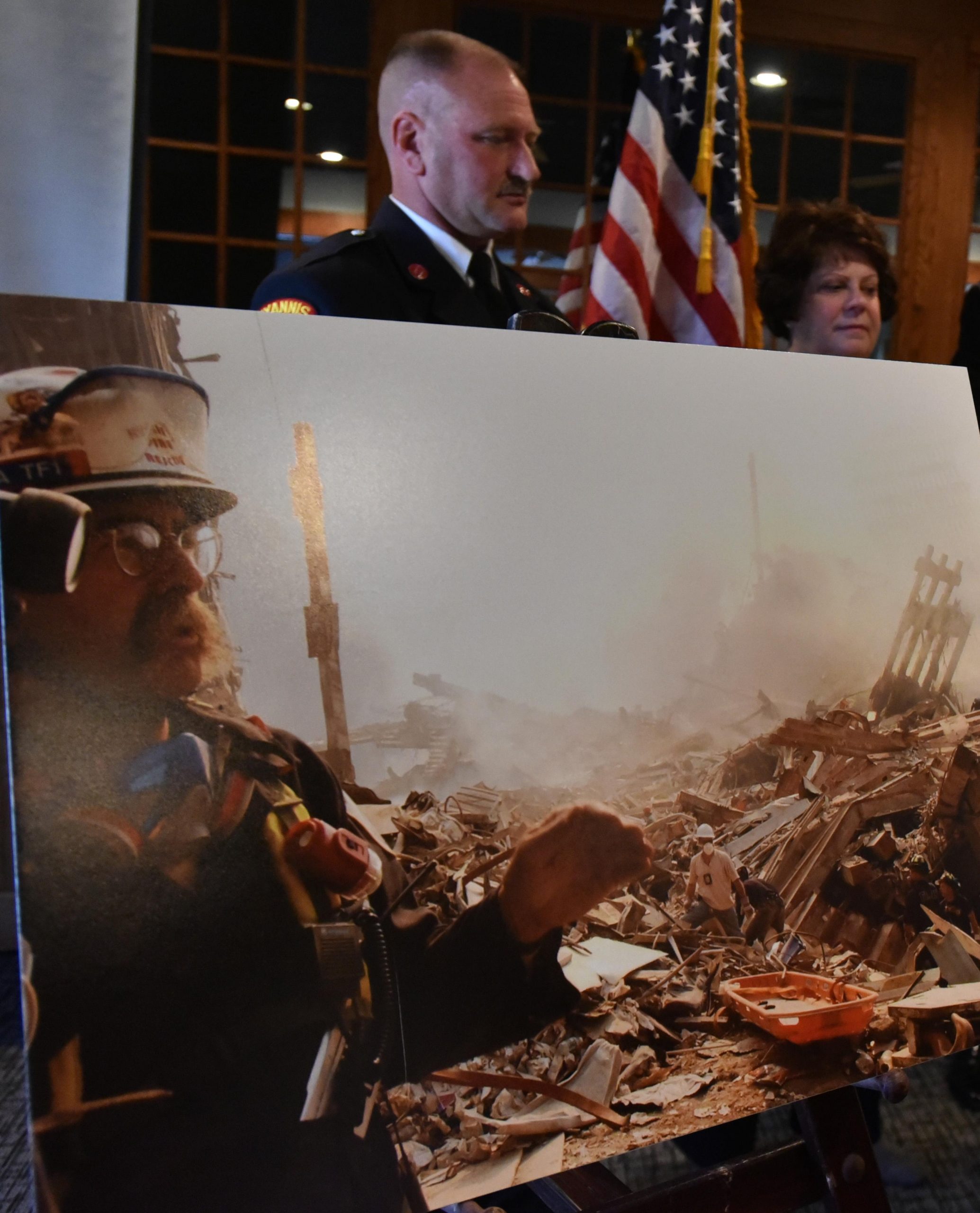 Hyannis Fire Department Deputy Chief Eric Kristofferson and Kathy Kenney are framed by a photo of her late husband Tom Kenney who was posthumously awarded the Fire Safety Commendation Award at the Sons of the American Revolution’s Public Service Heroism Awards in Harwich on Saturday. [Steve Heaslip/Cape Cod Times]

“I volunteer all year long,” said Barnstable police Officer Brian Morrison, who received the Law Enforcement Commendation Award. “I love doing it, but I didn’t expect to ever get an award for it. My award is seeing everyone happy.”

Morrison is a full-time police officer who works exclusively at the Hyannis Youth & Community Center. He has served in several leadership positions the Kiwanis Club of Hyannis after volunteering there for 23 years.

“Clearly everyone can see that Brian gives a new meaning to community service,” said Terry Murray, vice president of the Cape chapter. “Brian, we all salute you.”

The Sons of the American Revolution was founded for descendants of patriots of the Revolutionary War and chartered by Congress in 1889. The society aims to preserve the memory and records of the American patriots who pledged their lives, fortunes, and livelihood to establishing the independence of the country.

The Cape Cod chapter, with 68 members, is the third largest chapter in the state and was founded in 1978. Throughout the year, members locate and recognize patriots who are buried on the Cape by marking each grave with a bronze plate.

The national chapter of the society has hosted similar award ceremonies in the past, Murray said.

Members of the chapter began in May searching for recipients by contacting the police and fire departments of the 15 towns on the Cape, Murray said.

Hyannis fire Capt. Thomas Kenney was posthumously awarded the Fire Safety Commendation for his 45 years of public service, 37 of those with the Hyannis Fire Department.

Kenney was the first paramedic supervisor at the Hyannis department and as a dive master, started the Hyannis Fire dive team. He was recognized locally and nationally as a heavy rescue expert.

When the World Trade Center towers collapsed in the Sept. 11 terrorist attacks, Kenney along, with his Urban Search and Rescue Team from Cape Cod, was among the first at ground zero, just hours after the buildings fell.

Kenney retired at 65 and died shortly after, in June, of occupational cancer.

“Thank you all very much and a special thank you to the Hyannis fire and police for all of their love and support to me,” said Kathleen Kenney, who accepted the award on his behalf.

After serving as a medical specialist and missile crew chief in the U.S. Air Force, Knowlton continued his public service in 1982 as a firefighter with the Hyannis Fire Department.

Knowlton was a leader and mentor in the field of technical rescue. He served as an academy instructor in a number of specialized rescue disciplines and led the Hyannis fire dive team as a certified dive master.

“I wish I could have him back but I appreciate this,” she said. “It’s an absolute honor.”

Lifeguard Madison Lynn Pawlina was presented with the Life Saving Award for seven rescues at beaches in Dennis.

Pawlina began her lifeguard training at 16 and has worked since then for the Beach and Recreation Department in Dennis.

In May 2014, at her first assignment, a 12-year-old boy became trapped between the sand bars and the deep waters of Corporation Beach. Pawlina noticed he could not swim and was struggling as the tide changed. Pawlina ran into the incoming tide, swam to the boy and brought him safely to shore.

A year later at the same beach, a man with Parkinson’s disease fell head-first into the surf as the tide was coming in. The 71-year-old swimmer could not surface. Pawlina noticed the man struggling under water, ran to get her water rescue board and swam to meet the man.

Pawlina was able to place him on the board and get him to shore, where she noticed he had turned blue and wasn’t breathing. She performed CPR and was able to start his breathing, even as a large crowd surrounded her yelling and screaming directions.

The man was transferred to Cape Cod Hospital and survived.

These were just two of the seven rescues credited to Pawlina, who is now 21 and a junior at Bridgewater State University.