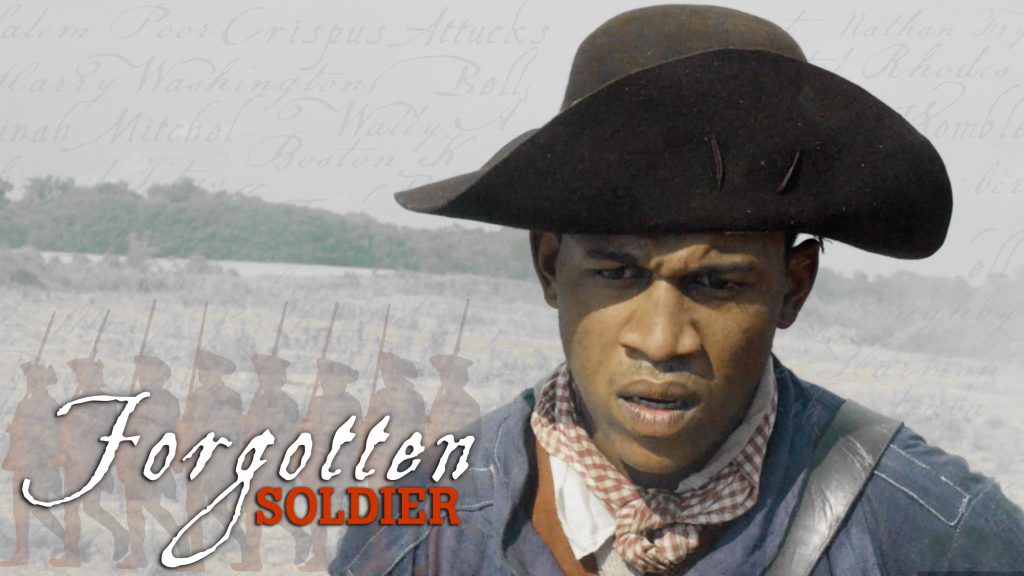 Rare documents and artifacts, interactives and compelling art, including a new contemporary work by nationally acclaimed artist Titus Kaphar, trace the experiences of African-American soldiers who took part in the American cause for a free and independent nation or took up arms for British forces in hopes of obtaining their own freedom.

The special exhibition, on display from June 29, 2019, through March 22, 2020, illuminates the difficult choices and risks faced by African Americans during a revolutionary time in history and the varied and indispensable roles they played during the war and beyond.

Among the countless stories, learn about Crispus Attucks, a sailor formerly enslaved and of African and American Indian descent, who was the war’s first casualty at the Boston Massacre, and later considered “the First Martyr of Liberty.” Bristol Rhodes, an enslaved man who secured freedom by joining the Rhode Island Regiment, fought at the Siege of Yorktown in October 1781, and lost his left leg and one hand due to cannon fire. Thomas Carney, born free in Maryland, joined the 5th Maryland Regiment in 1777 and served as a Continental Army private in some of the most iconic battles of the war—Brandywine, Germantown, Monmouth and Guilford Courthouse—receiving a cash bonus and 100 acres of bounty land for his service. 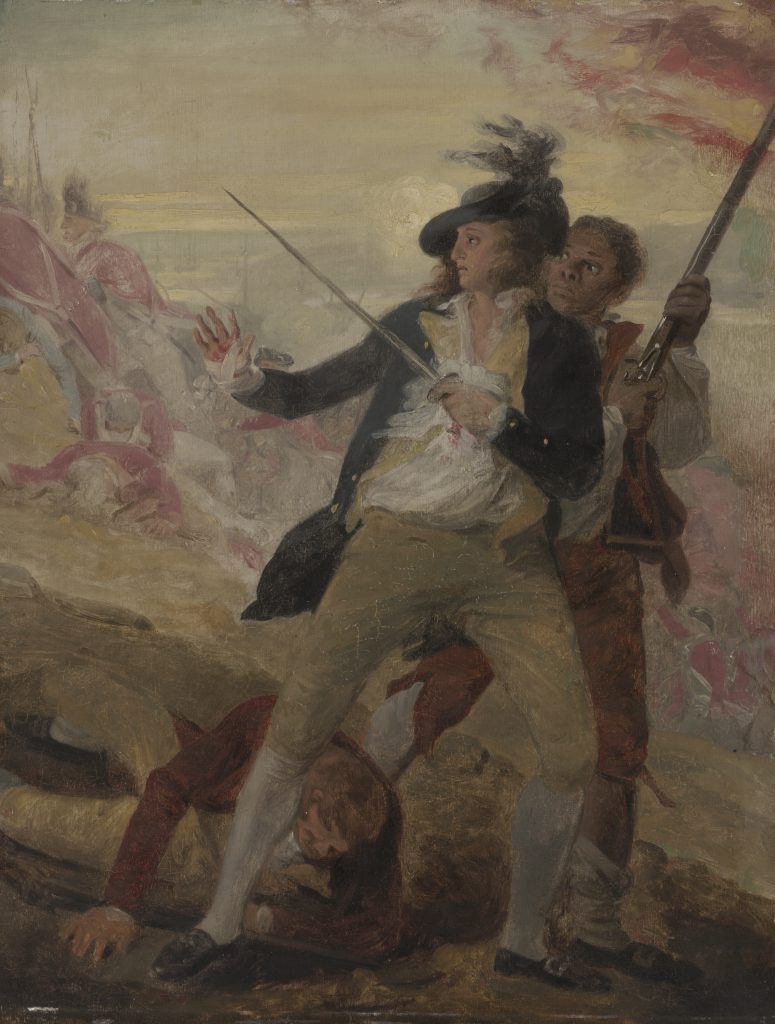 Dunmore’s Proclamation of 1775 from the Library of Congress will be on loan for six months of the exhibit, followed by another copy of the document from the Albert and Shirley Small Special Collections Library, University of Virginia. The document by Lord Dunmore, the last royal governor of Virginia, promised freedom to all enslaved African Americans owned by rebelling Patriots, if they would serve and bear arms with loyalty to Great Britain.

Treaty of Paris, Article 7, New York, 1783, on loan from the U.S. National Archives in Washington, D.C., ordered that all prisoners were to be freed, and the British were to withdraw all of their forces, “…without causing any Destruction, or carrying away any Negroes or other Property of the American inhabitants….”

The American “Inspection Roll of Negroes No. 1 and the British “Book of Negroes,” on loan from the U.S. National Archives in Washington, D.C., and the National Archives (Public Record Office), Kew, London, England, will be reunited for the first time since 1783 for this special exhibition. The Americans and the British created these two documents to partially satisfy a requirement of Article 7 of the Treaty of Paris. These ledgers record the names of approximately 3,000 African-American men, women, and children who escaped to British lines during the war in hopes of obtaining their freedom. An interactive in the exhibit will offer an in-depth exploration of the “Inspection Roll of Negroes Book No. 1” from the U.S. National Archives.

Life, Liberty, and the Pursuit of Happiness – An interactive wheel activity shows the choices that many African Americans made in the hope for freedom, knowing that liberty was not guaranteed. By turning the wheel to make a choice, visitors can find out what happened to actual people who made the same choice and learn about their stories in the exhibition.

In this 15-by-11 inch oil painting, Asaba and his owner, Lt. Thomas Grosvenor of Pomfret, Conn., look at the fallen hero, Dr. Joseph Warren, who was killed at the Battle of Bunker Hill in 1775. Asaba survived this battle and was freed by Grosvenor after the war. Interactives & Hands-On Experiences

Hiding in Plain Sight – This search-and-find activity illustrates the story of James Lafayette, an enslaved African American who served as a Patriot spy and relayed messages to George Washington and the Marquis de Lafayette during the Revolutionary War. Visitors can find eight hidden objects used to pass spy messages.

Of The Greatest Service: Joining Patriot Ranks – Using touchable objects, a flip door shadow box reveals some items that free African Americans would have received while serving in Continental Army militias and regiments.

Who Am I? And What Became of Me? – Learn the identity and fate of six individuals by reading brief stories of their circumstances during the Revolutionary War.

Remember a Soldier! – This activity encourages visitors to send an uplifting postcard message to modern-day enlisted soldiers to let them know they are not forgotten.

“Forgotten Soldier” features an original work by Titus Kaphar, an American contemporary artist and 2018 MacArthur Fellow whose work reconfigures subjects in art history, often reinserting African Americans into familiar narratives of the past. 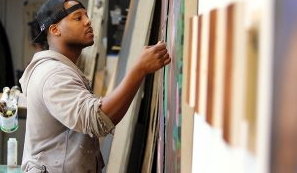 Surrounded by 18th-century stories of African-American soldiers before, during and after the Revolution, the special exhibition showcases a commissioned sculpture by Kaphar that invites visitors to “shift their gaze” or look at history in a new light to contemplate these soldiers often overlooked in historical accounts. The project is in partnership with the Williamsburg Contemporary Art Center.

His paintings and sculptures have garnered a national spotlight in exhibits and permanent collections of the Museum of Modern Art and Smithsonian National Portrait Gallery, among other prominent institutions, and graced the cover of TIME Magazine. The New York Times recently profiled his work and his efforts to nurture young artists in New Haven, Conn.

Visitors can connect with more stories of African Americans in the Revolution and their wartime experiences by exploring the American Revolution Museum at Yorktown permanent gallery exhibits, enhanced through the museum’s free mobile app. The James Lafayette gallery tour, available on the mobile app, uncovers the lives of James Lafayette, Peter Salem, Billy Flora, and Billy Lee. Visitors can download the app from home or at the museum on Google Play or the Apple App Store by searching Yorktown Museum Gallery Tours. 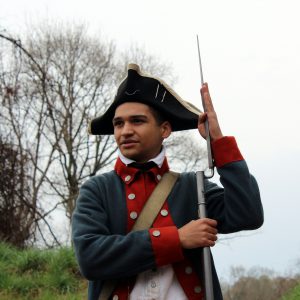 The American Revolution Museum at Yorktown will host a series of public programs and special events to complement this special exhibition. Supplemental daily programming illuminates the lives of African-American soldiers in the Revolutionary War with educational lectures and hands-on leafrning activities with historical interpreters. Designed to provide the knowledge and skills needed to help ensure history isn’t forgotten, the five-part “Preserving The Past: Family History Workshop Series” explores genealogy and military records, cemetery preservation, photograph and document conservation, and preservation of oral histories. A special salute to “The African-American Soldier” November 9-10 features re-enactors representing African-American military regiments across history demonstrate the varied and indispensable role of African-American soldiers in each of America’s armed conflicts.

The special exhibition is held in conjunction with the 2019 Commemoration, American Evolution, marking the 400th anniversary of the first recorded Africans in Virginia in 1619 and the evolution of America.

“Forgotten Soldier” is made possible in part by Altria Group.

About the American Revolution Museum at Yorktown

The American Revolution Museum at Yorktown, open 9 a.m. to 5 p.m. daily (until 6 p.m. June 15-August 15), tells the story of the nation’s founding, from the twilight of the colonial period to the dawn of the Constitution and beyond. Comprehensive indoor exhibits and outdoor living history capture the transformational nature and epic scale of the Revolution and its relevance today. The museum is located at 200 Water Street, in Yorktown, Virginia. Parking is free.