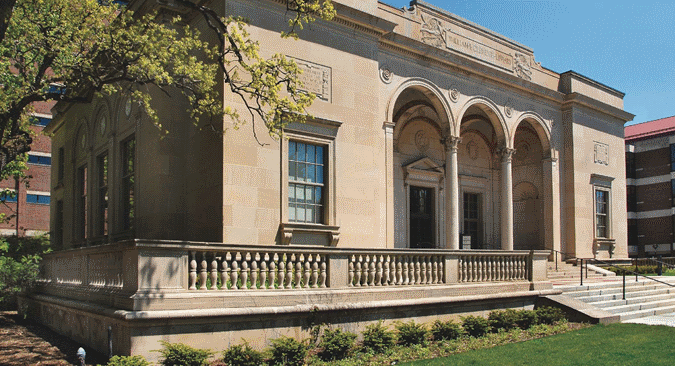 In the summer of 2017, as I walked through the Ann Arbor Art Fair, I passed by a tent in front of the William L. Clements Library. I was intrigued by its Italian Renaissance structure. Even though I had studied at the university and worked nearby, I had never ventured inside the Clements Library. What a surprise awaited me! Inside, I learned that the library collections focus on early America and house an unparalleled collection of books, maps, papers and graphics from the Revolutionary War.

My discovery of the Clements Library coincided with my increased involvement with the SAR, and I immediately saw the possibilities for collaboration. We brought both staffs together to discuss opportunities for creating Revolutionary War educational materials, exchange of expertise, and possible exhibitions at the NSSAR headquarters and in the future SAR Education Center and Museum. 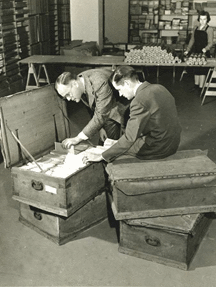 The manuscript papers of General Thomas Gage (1721-1787), commander of British forces during the Revolutionary War, arrived at the Clements in the original 12 filing trunks that traveled with Gage through the Colonies.

Currently, education materials are being developed to support teachers in classroom goals about the American Revolution. Working with the NSSAR Education Committee and NSSAR Education Outreach, materials utilizing Clements Library artifacts as primary sources to design lesson supplements and complete lesson plans are are being developed by the University of Michigan School of Education.

My chapter has been able to host several of the Clements curators as speakers at our meetings, and Director Kevin Graffagnino spoke at the Fall Leadership Meeting. The Clements speakers have fascinated their audiences with historical knowledge while displaying significant primary sources from early America.

Prior to establishing the library, William L. Clements, a wealthy Bay City heavy equipment manufacturer, collected rare books. The focus of his collection was early America. For example, one cornerstone piece he purchased was a copy of Columbus’ letter about his voyage to the Americas, published in Latin in 1493. Later in his collecting career, Clements acquired substantial manuscript collections of Revolution- era British military and political leaders, buying the archives from their descendants.

The library attracts people from across the world, like Pulitzer Prize winner David McCullough, who used the Clements Library archives to write his book, 1776.

Researchers utilize the Avenir Foundation Reading Room at the Clements, where they may study primary sources, including books, manuscripts, maps and graphic materials.

Clements made the decision to donate his entire book collection to the University of Michigan and commissioned renowned architect Albert Kahn to design the building that cradles this remarkable collection. Today, the book collection includes 80,000 rare books, pamphlets, broadsides and periodicals. The library also holds 2,700 manuscript collections, 600 atlases, about 30,000 maps, 150,000 prints and photographs, as well as artwork, sheet music and ephemera.

Speakers — The Clements has several scholarly and enthusiastic speakers available to present programs on the American Revolution and other areas of early America at chapter and state societies by arrangement. The only costs to schedule a speaker are travel and hotel accommodations. Those attending Leadership this past fall had the opportunity to hear an excellent presentation by Kevin Graffagnino, director of the Clements, at the Saturday night formal dinner.

Explore the Clements online, or visit in person. A great deal of information and research sources are currently available at the Clements website: www.clements.umich.edu. If you decide to visit in person, the exhibits are open Fridays from 10 a.m.-4 p.m.; scheduled tours are offered. Mondays through Thursdays, the Clements is open for research visits only. If you have a special group visit in mind, contact Mickey McGuire, project manager, SAR/Clements Programs, at mmcguirea2@gmail.com. 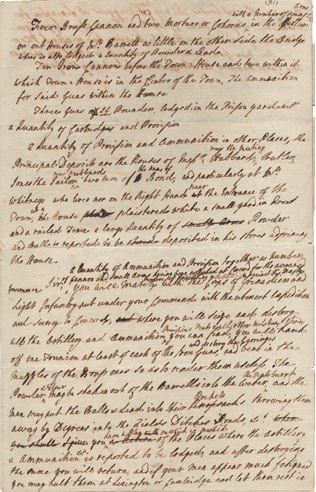 Connect with the Clements through social media: www. Facebook.com/Clements.Library and @ClementsLibrary on Twitter.

Future Developments will be periodically posted in The SAR Magazine and forwarded to all state presidents for member distribution.

Bookends of the American Revolution

The Clements holds the orders, hand-drafted by Gen. Thomas Gage, to march on Lexington in 1775 and the 14-page surrender letter from Gen. Charles Cornwallis at Yorktown—the documents that began and ended the Revolutionary War. It also holds an engraving of the Boston Massacre by Paul Revere (1735-1818), which was framed by Revere himself, according to Clements Library tradition.

The Clements has a vast collection of primary source materials, especially on the colonization of North America and the American Revolution. A British manuscript map of eastern North America shows the distribution of British forces, with each unit identified by regimental number and by symbol, down to company size.

Among the manuscript collections are the correspondence of Colonel Andre, the leader of British spy efforts, including cyphers and captured spy documents from Colonial forces. Benedict Arnold offered to sell West Point to the British for 20,000 pounds in this letter, written in a dictionary spy code. Arnold’s treasonous correspondence was brought to light when the Sir Henry Clinton Papers were made available to researchers by the Clements Library. 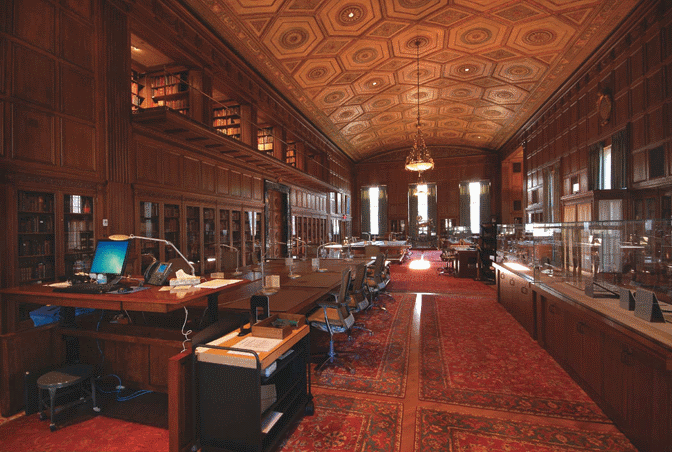 Additionally, the collection boasts an April 1783 map of the new republic, with the cartouche depicting George Washington as a military leader and Benjamin Franklin as a diplomat beneath a rendering of the U.S. flag.

Among the holdings in the Clements Library collection are a hand- drafted orders by Gen. Thomas Gage to march on Lexington in 1775 (opposite page); an engraving of the Boston Massacre by Paul Revere (1735-1818), which was framed by Revere himself (above); a pen-and-ink and watercolor map by John Montrésor (1736-1799) depicting Boston harbor with its fortifications erected by the British and the rebel besiegers (above, right); and an April 1783 map of the republic (right), with the cartouche depicting George Washington as a military leader and Benjamin Franklin as a diplomat beneath a rendering of the U.S. flag. 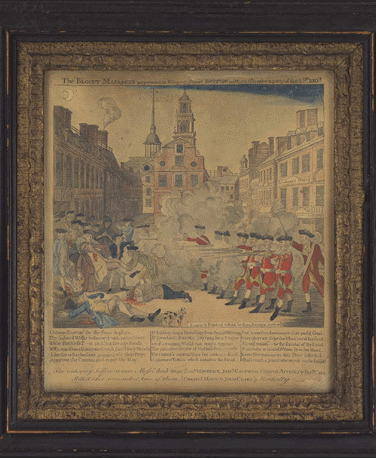 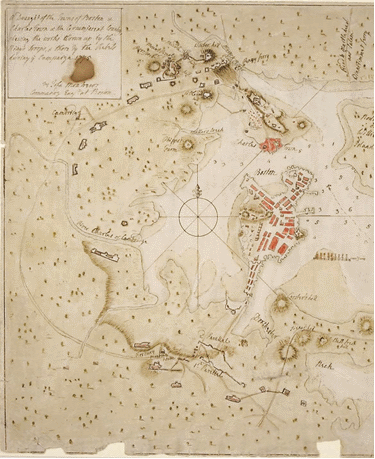 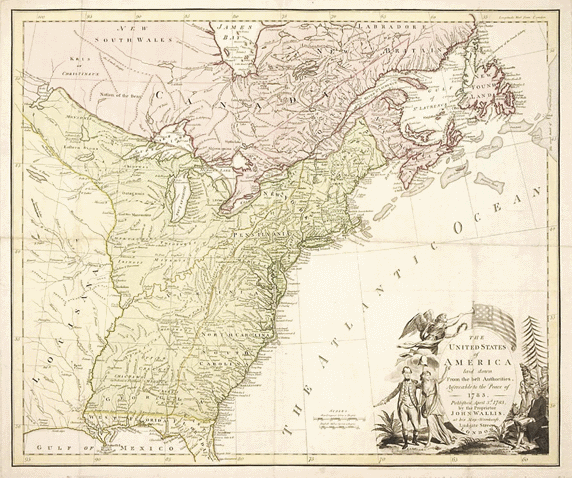