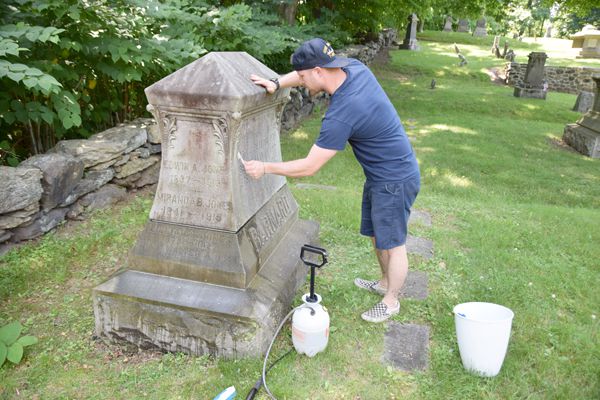 Matthew Sargent, a life-long Marlborough resident — and member of the Massachusetts Society SAR —, wears many hats. He is a marine engineer, a graduate of Mass Maritime Academy, an HVAC mechanic, a Navy Reservist, and a history buff who spends his spare time making sure that veterans from this city are recognized and remembered. Sargent can often be found in Rocklawn Cemetery on Stevens Street, placing markers, American flags, laminated placards, or cleaning headstones.

As if that weren’t enough to set him apart from many young men his age, he has also done the research necessary to learn the stories behind the names on those headstones, making tags to hang on the veteran markers that include a picture of the deceased with details of their life and where and how they passed.

“I got started on this quest while working as a government civilian assigned to a ship in Italy,” he explained. He was curious if anyone from Marlborough might be be resting in the Sicily–Rome American Cemetery, a world War II American military grave cemetery, located in Nettuno, near Anzio, Italy.

Taking photos of the monuments and speaking to Gary Brown (Marlborough’s Veterans’ Agent at the time) started him on the quest to learn more and more. He has two great-great-great-great-grandfathers who fought for the Union, one serving multiple enlistments in the Infantry and Artillery while the other served two enlistments in the Navy. “I hope that someone was taking care of their grave sites somewhere,” he said.

Sargent believes Marlborough’s Forestry, Parks and Cemeteries Division does a tremendous job keeping the cemeteries in beautiful condition, but they just don’t have time to individually clean all the headstones. Armed with a plot map indicating graves of veterans of various wars, Sargent does the research and then brings his D2 spray, a bucket of water, various brushes and some elbow grease and goes to work cleaning headstones.

“I use the first rule of conservationists, which is to do no harm, so I don’t attempt to repair the concrete when broken, I just spray and scrub,” he explained. “I know never to use bleach, as the old concrete is so porous, but I did the research and D2 Biological spray is the safest product to use.”

Pointing out three grave markers in a row with flags and photo tags, Sargent spoke about the Goodnow brothers, all of whom were killed in the Civil War, the oldest was age twenty-four at the time.

“I feel a strong connection to the Goodnow brothers, mainly because I can see their faces from the photos I was allowed to see at the Marlborough Historical Society,” he said. “Knowing that three of four brothers did not return home really hit me,” he said. “In my own case my great-great-great-great-grandfather Ivory Hanson was one of five brothers who went off to war from Maine. Three of his brothers died in the service, including two who were only sixteen years old. Another died ten years after the war from complications to an injury sustained in battle.”

Sargent is particularly moved by stories in which more than one sibling died in the service. “The ability to see their faces and have a similar story in my own family tree are what has drawn me to the (Goodnow) boys,” he added.

In the course of his research, Sargent has determined that the lists of names on some of the city’s monuments are not complete. A source he used for the Civil War was Tom Ellis’s work, “Marlborough and Hudson in the Civil War,” which offered a geat starting point for names and details. He was able to further research and grow from there.

For the other wars it’s been a bit of hit or miss based on the sources he used, from ancestry.com to newspapers.com. Sometimes simply searching “Marlboro/Marlborough” in the right database would lead to a treasure trove of other information he didn’t have before.

Sargent has found both the Marlborough Historical Society and the Veteran’s Council to be very helpful in his deep dive into the records.

Bob Kane is the Curator and Vice President of the Historical Society and is deeply grateful to Sargent for what he’s doing, calling Sargent “one of a kind,” adding, “I can’t say enough about him! He is selfless, dedicated, patriotic, respectful and more, and Marlborough is very fortunate in having a Matthew Sargent.” 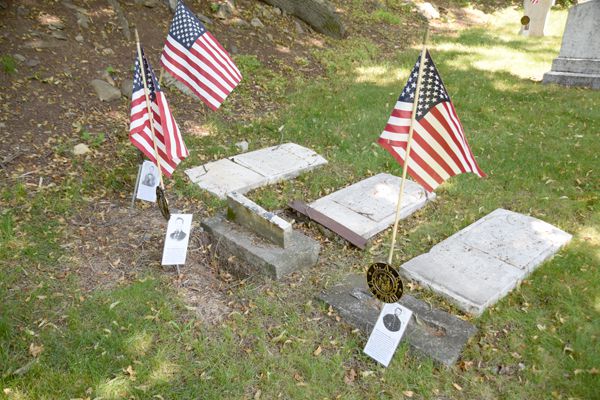 The burial site of the three Goodnow brothers with the addition of flags, pictures and historical information provided by Sargent.

Starting with a name from a monument and using various search engines and websites, such as Gold Star Family Registry, the Massachusetts National Guard archives and the DPAA (Defense POW/MIA Accounting Agency) website, Sargent has often been able to find a picture and learn a bit about these veterans. Part of Sargent’s eventual goal is to publish a booklet about the Marlborough citizens who gave the ultimate sacrifice for the nation.

“Worcester State (University) has a great template to tell the stories about some of the Civil War veterans,” he said, “and I saw a book in the Bangor Public Library in Maine that showed a different biography each day of a person who died in World War II. I’d like to find someone to help me write and publish something like that. It is so rewarding to be able to give back, to put a face with the name, and learn about these soldiers who have no one to speak for them, especially those from as far back as the Civil War.”

Sargent invites anyone interested in helping in the cemetery to contact him through his Facebook page (Matty Sargent). “Just bring a gallon of water and some gloves. I’ll supply the brushes and the D2,” he urged.

The 121st Congress will be held in the "Twin City" of Winston-Salem, North Carolina, July…