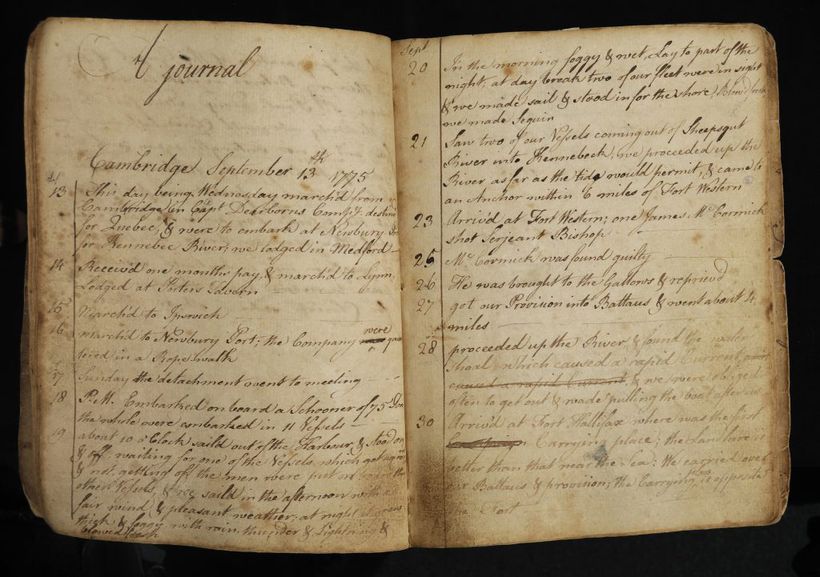 An excerpt from the manuscript of American Revolutionary War soldier James Melvin. (THE AMERICAN REVOLUTION INSTITUTE OF THE SOCIETY OF THE CINCINNATI)

Revolutionary War soldier James Melvin feasted on a small bird and a squirrel after eating the last of his provisions the day before.

He walked for miles at a time (at one point he conquered 20 miles in a single day) through the woods at night, his legs buried by mud and snow.

Conditions were sometimes so harsh, the Concord native recalled, that he was unable to stop to eat or find adequate housing to rest, forcing him to shelter inside a barn instead.

“The Company were 10 miles wading knee deep among Alders … and came to a river which had overflowed the land,” he wrote in one journal entry dated October 28, 1775. “We stopped some time not knowing what to do & at last were obliged to wade through it, the ground giving way at every step.”

These experiences — and many more — from Melvin’s time as a private during the Revolutionary War, are detailed in the centuries-old pages of the soldier’s manuscript, a trove of firsthand accounts from the front lines of the battlefield that was recently acquired by the American Revolution Institute of the Society of the Cincinnati, in Washington, D.C.

And soon, the original contents of Melvin’s “long lost” musings will be conserved and digitized, making it more accessible to a wider audience, the institute announced last week.

“I think it certainly is something to celebrate and is of great interest,” said Ellen McCallister Clark, the institute’s library director. “We are eager for it to be known that it is here, and eager for it to be used. So the digitization will be a critical step for that to happen.”

The manuscript is a day-to-day account of Melvin’s life in the Continental Army, after enlisting and marching from Cambridge in Captain Henry Dearborn’s company, and joining Colonel Benedict Arnold’s “arduous” expedition through the woods of Maine to Quebec, according to the institute’s description of the bound volume.

Clark said the organization purchased the document from a London bookseller in July of last year, and then entered it into its online catalog shortly thereafter. But last week marked the first time that the institute announced the acquisition on social media.

“It’s very neat,” said Clark, who has pored through the passages in the manuscript. “We have been spending time understanding it and cataloging it.”

Transcriptions of Melvin’s journal have been published and made available from three separate editions published between 1857 and 1902, according to the institute. But the whereabouts of the original document — handwritten by Melvin — had been largely unknown to scholars, Clark said.

“Generally the published texts follow this manuscript document in content, but there are differences among them that are telling,” she said in a follow-up message to the Globe. “The editors … regularized Melvin’s spelling, capitalizations and punctuation – having the original document allows us to read it exactly as he had written it, complete with crossed-out words and other internal details.”

In a post about the acquisition, the institute said a good portion of the journal focuses on the many months that Melvin spent in captivity in Canada, after being apprehended by British forces.

That experience, listed under the title “Prisoner in Quebec” in the manuscript, includes excerpts like one dated Feb. 24, 1776.

The first page of the bound volume is dated 1777, which could indicate that its contents were transcribed from separate journal entries kept by Melvin while he marched through the wilderness toward Canada during the war. The last entry in the document is from August 5, 1776.

“Melvin could have taken a little notebook,” author and historian J.L. Bell, who runs the blog “Boston 1775,” about the American Revolution, said in a message to the Globe. “But the neatness of the manuscript indeed strongly suggests he wrote out the text afterwards,” likely for posterity.

Besides his day-to-day accounts about the journey north, snippets about the weather, and later, his imprisonment and release, the manuscript also features two essays — “Treatise upon Air” and “An Explanation of Scripture Taken from the Epistle of St. Paul the Apostle to the Gallations” — penned by Melvin. These essays are not part of the other published versions of his writings, the institute said.

Bell said these additions could be of particular interest to people researching what “ordinary New Englanders” may have thought about certain topics, like religion, around the time of the war.

“It’s also good that the [American Revolution Institute] plans to digitize the diary and make the images more widely available,” he said of its pending posting online.

Clark said because the institute doesn’t have the equipment to digitize a multi-page volume like Melvin’s in-house, that process will be done by an outside conservator hired to treat the fragile document.

Admittedly, she said, they’ve been a little slow to get the ball rolling — but with good reason.

“I’ve been reluctant to part with it,” said Clark, “it’s of such interest and such an important acquisition.”