A Genealogical History: Jews and Muslims in British Colonial America 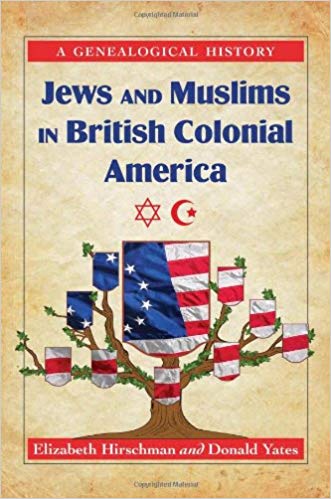 For most Americans, the story of their nation’s origins seems safe, reliable and comforting. We were taught from elementary school that the United States was created by a group of brave, white Christians drawn largely from England who ventured to these shores in search of religious freedom and the opportunity to fulfill their own destiny. Recent revisions to this idealized and idyllic narrative have never seriously questioned its basic tenets. So although we now recognize some of the contributions made by Africans to America’s success and feel perhaps a heightened sense of regret, remorse and even guilt over the destruction of American native cultures, we never have had much reason to doubt the basic premise of the story. Our founding mothers and fathers were white, Christian and British.

In this work, we present a series of Colonial documents, contemporary firsthand accounts, records, portraits, family genealogies and ethnic DNA test results which fundamentally challenge the national storyline depicting America’s first settlers as white, British and Chris- tian. We postulate that many of the initial colonists were of Sephardic Jewish and Muslim Moorish ancestry. Usually arriving as crypto — Jews with their religious adherence disguised, and crypto-Muslims, these immigrants served in prominent economic, political, financial and social positions in all of the original colonies.

The evidence in support of this radical new narrative begins with an examination of the British colonial companies organized in England to bring settlers to North America and exploit the natural riches believed to be there.

Of course, both Spain and France had already made forays into North America, founding St. Augustine and exploring parts of the coastline as far north as Newfoundland, though their activities as foreign powers are given short shrift in our Anglo-centric version of the birth of America. What is even less frequently mentioned regarding these Spanish and French settlements and voyages is that many of the colonists and sailors were of Sephardic Jewish and Muslim Moorish descent. Several of those aboard Christopher Columbus’s first voyage in 1492 and famously even Columbus (Colon) himself were of Jewish ancestry. They were Jews or crypto-Jews.

One historian of Inquisitional Spain and biographer of Christopher Columbus, Simon Wiesenthal, notes that throughout the sixteenth century the movement of the Marranos to the New World had continued,” and that “after the expulsion of the Jews and flight of the Marrano element, it was the turn of the Moriscos to serve as scapegoats for the ills of society.” The same writer estimates that, all told, Spain lost one and one-half million people in sequence of the ‘purification’ of its population of Jews and Moors. Many occupations were virtually abandoned,” he writes. “Trade, the crafts, and the sciences languished. Moreover, since these branches of endeavor had been the domain of Jews and Moriscos, they had become in themselves suspect. Spaniards had to be extremely careful about entering any of these fields Spanish life as a whole was the worse for these injustices Spain was swamped with fortune hunters from all parts of Europe … but they could not revive the Spanish economy. Just as the irrigation canals dug by the Moors in Andalusia were allowed to silt up, so the very channels on which the country’s health depended fell into neglect.”

The first and second British colonies in North America, Virginia and Massachusetts were provisioned, funded and peopled by persons of Sephardic Jewish and Muslim Moorish descent. Current genetic genealogical studies of the Appalachian descendants of these early colonists demonstrate that they carried DNA haplotypes (male or female lineages) and genes from Sephardic, Ottoman and North African founders. Further, these early North American colonists often bore straightforwardly Jewish and Muslim surnames. Attested are Allee, Aleef, Sarazin, Moises, Bagsell, Haggara, Ocosand and even Saladin. Indeed, given the patently non-Christian backgrounds of so many settlers up and down the Atlantic coastline of the American colonies, it becomes difficult to ignore the significant declarations of religious tolerance inscribed in the U.S. Constitution.

Even (and particularly) New York, founded by the Dutch as New Amsterdam, was heavily peopled by Sephardic Jews and Muslim Moors. The presence of persons from these ethnic affiliations on the governing boards of the Dutch West and East India Companies is no accident. They included Jonathan Coen (Cohen) and Cornelius Speelman (another classic Jewish name). Other New Amsterdam, and later New York, residents were Jacob Abrahamsen and Denys Isacksen. We present contemporaneous testimony suggesting that even the leading Knickerbocker families of the New York colony — the van Cortlandts, Philipses, van Rensselaers, De La Nos and De Lanceys — were of Sephardic ancestry.

This fresh look at Colonial American genealogies and settler lists presents for the first time in one source the Spanish, Hebrew, Arabic and Jewish origins and meaning of more than 5,000 surnames, the vast majority of them widely assumed before to be sturdy British family names of ancient bearing. Many of our name etymologies plainly contradict the standard reference works. The decipherment of surname history is an involved subject, one that can extend over centuries of transformation in several countries and require knowledge of a multitude of languages. For instance, in order to understand the sea change suffered by the ancient Jewish name Phoebus to English Phillips (and Scottish Forbes and Frobisher), with stages along the way as Pharabas and Ferebee and Furby, one must have an appreciation for the synthesizing religions of the Roman Empire, including the Cult of Mithras and naming practices of Greek-speaking congregations of Jews, as well as conversion of Berber populations to Judaism, conquest of Spain by Berber armies in 710 and subsequent development of Judeo-Arab culture, not to mention the medieval French, Norman, Anglo-Saxon and Scottish linguistic, orthographic and social filters the surname passed through until it became enshrined in modern times as “good ole English” Phillips.


A free copy of this publication is available online here.

Founder's Day originated from a proclamation by the United States Continental Congress on October 11, 1782, in response to Great Britain's expected military defeat in the American Revolutionary War. The war did not formally end until Congress ratified the Treaty of Paris on January 14, 1784. The purpose of the proclamation was essentially to thank God for America's good fortune in the Revolutionary War.
Upcoming Events