As published by the Society in Boston in 1901

Prepared by Henry A. May
Soldier and Sailor Grave Markings 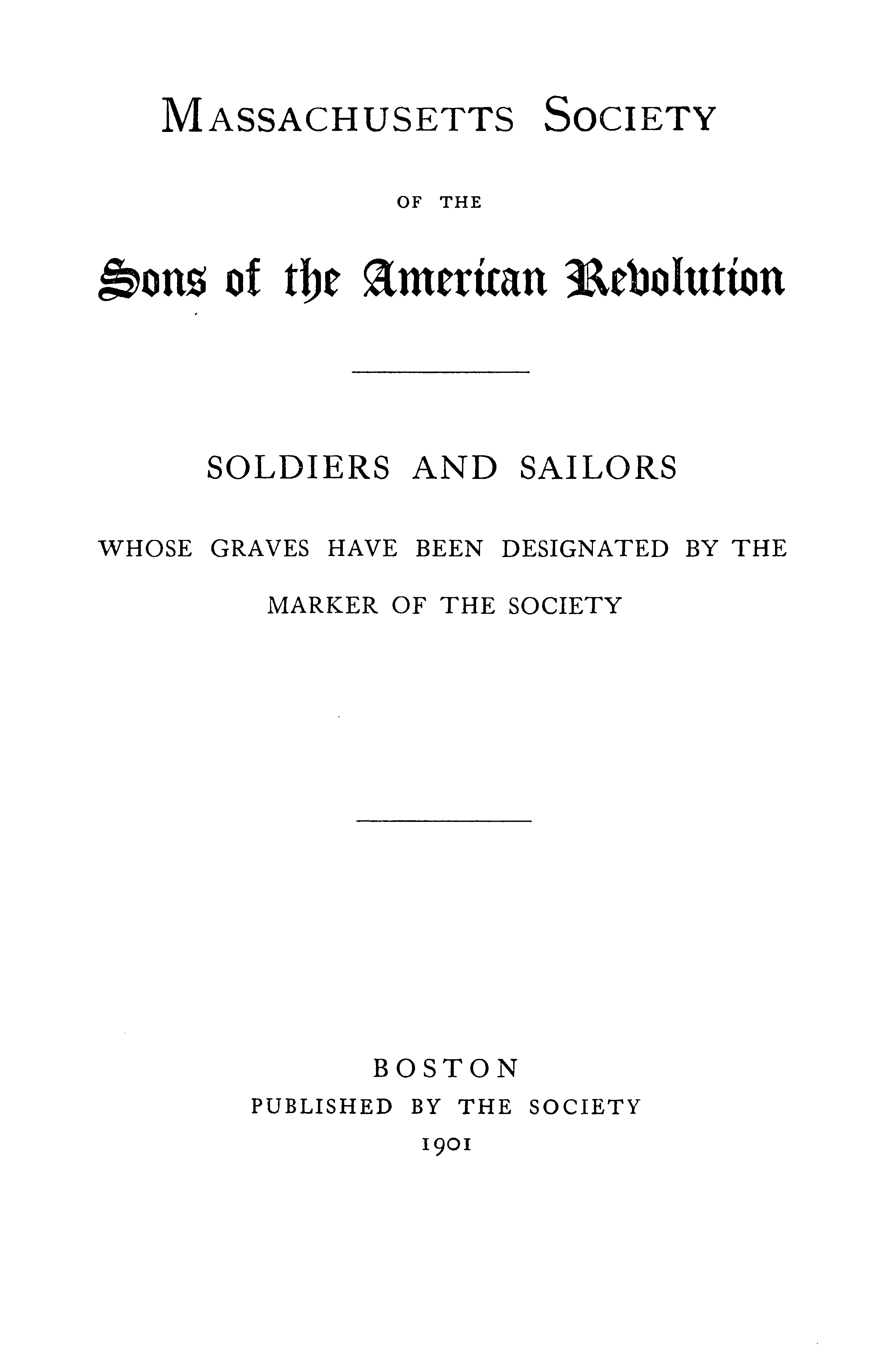 The marker of the Society, which has been fully described and figured in previous Registers, has been placed at the graves of 4,517 soldiers and sailors of the War of the Revolution. About 3,815 graves have been marked in 115 cities and towns of our own State, 693 in other States of the Union, and 9 in foreign countries. It is made either of iron or bronze, at a very moderate price, and can be procured from the maker on an order furnished by the Registrar.

The origin and history of the markers is well expressed in the following extracts, made from the speech of Captain Nathan Appleton, one of the Vice-Presidents of our Society, on the occasion of the celebration of the ” Children of the American Revolution” at the Old South Meeting-house, July 4, 1895″. It [the design] is taken from the cross of Saint Louis, with some changes; and nothing could be more appropriate, as you will remember that it was during the reign of Louis XVI. of France, who was Grand Master of the Order, that Lafayette and the other Frenchmen of the army and navy came to the struggling colonies and gave us the assistance we so much needed at the time.

“In the centre of the cross is the Minuteman,” a copy of the statue, by Daniel C. French, which stands by the Concord Bridge, where was ‘fired the shot heard round the world’ on April 19, 1775.

“The matter was discussed by the Board of Managers of the Massachusetts Society. At a meeting in the summer of 1890 the idea of placing some mark by the graves of soldiers, sailors, and patriots of the American Revolution first had expression in the town of Acton, Mass., where, at the suggestion of our fellow member, Reuben Law Reed, and aided by two posts of the Grand Army of the Republic, on Memorial Day, 1892, simple wooden eton0 of the American revolution markers were put by the graves of those who were known to have taken part in the War for Independence. This, also, was done at the neighboring town of Stow on the 4th of July of that same year.

“At a meeting of the Massachusetts Society held in Wesleyan Hall, Boston, February 8, 1893, to take action in relation to having the 19th of April made a State holiday, the Rev. Carlton Albert Staples, of Lexington, suggested that it would be well to have some way of marking the graves, and also of placing in town halls or libraries tablets with the names and services of those who had honored the history of the town by what they had done in the Revolutionary War. A committee was appointed for this, with Mr. Staples as chairman, and at the annual meeting of the Society, April 19 of that year, made a report on the subject. From this came the appointment of a committee — of which I was made chairman — to prepare some special design to be placed in cemeteries. A design was presented at the meeting of the Society held at Marblehead October 19,1893; and it was voted to adopt it, and also to order fifty in behalf of the Society. So now it became an accomplished fact; and preparations were made to bring the markers to the notice of municipal authorities, so that the work of placing them in the graveyards could be initiated on the new Patriots’ Day, April 19, 1894, which was done. I should have stated that on this day, 1893, small American flags with the letters S. A. R.’ were placed by patriotic citizens at Revolutionary graves in several of our towns. You will notice that the marker has on the three upper arms of the cross the letters S. A. R.,’ which can stand for a Soldier’ or Sailor’ of the American Revolution, or, if it please you, for Son’ or Society,’ making it very comprehensive, at the same time clearly fixing the name of our organization as that of the American Revolution.’

“At the meeting of the National Society held at Washington, D.C., April 30, 1894, the marker was officially adopted by the Society, and since that time has come into general use. Thousands of them have been placed in Massachusetts; and they are fast going to other States, some to Alexandria, Va., while there is one in Chicago of an old soldier of the war who settled and died in the young city of the lake.”

By an Act of the Legislature, towns are authorized to vote such sums as they deem necessary for erecting headstones, or other monuments, to the memory of those who served in the Revolutionary and other wars.

To perpetuate the record of the markers already placed, the managers have authorized its publication in connection with the Register. The names have been arranged under the towns in which the persons were buried. Certain cities and towns have voted money for the marking of graves, but very many of the graves herein noted have been marked by private individuals. In some places all the markers are of bronze; in others, of iron.

During recent visits to Paris, Captain Appleton has interested himself in identifying and marking the graves of Frenchmen and others who rendered service during the War for Independence, as shown by the following list:

The book of patriot grave markings is available here.

The American Political Society was established in 1773 in Worcester, Massachusetts, by Col. Timothy Bigelow (1739-1790) as an extension of the Committee of Correspondence. It was a secret society of 71 Worcester Whigs who organized for the purpose of debating "upon ... our rights and liberties" and determining "methods to be pursued" in securing them. The Society held monthly meetings at a public house, usually the inn of Asa Ward (1748-1818), and eventually assumed control of town meetings and instructed the moderator and the representative to the General Court. The organization became a potent means of defeating

The "Flames of Sedition" had already spread throughout the countryside where 95% of Massachusetts residents lived after a series of episodes, including the Tea Party and Stamp Act had led to tension and rage. The port of Boston was still controlled by the Crown's military forces and many of the educated elite had assembled in Philadelphia to decide whether they should wrest control away from the Crown. But at meeting houses and taverns across the Bay Colony, the farmers and shopkeepers were preparing and reacting in a determined rage to the loss of representation and oversight they once had to assure fairness in the Courts.

Most farmers and craftsmen were concerned with local issues - the struggle of daily life trying to grow crops on rocky soils or tend to church or local Town Meeting duties. Yet the contrasts of wealth between the educated elite and yeoman farmers was growing significantly while the rise of the "strolling poor" and landless was starting to increase as generations split up original land holdings again and again. Debts for farmers were growing steadily and historians have found that up to 22% of the farmers were facing litigation for unpaid debt. Courts had tremendous power to seize a farmer's property, so this was a growing concern in the years leading up to the Revolution.