William Dawes, Paul Revere’s (mostly forgotten) fellow rider, is said to lie at King’s Chapel Burying Ground. But an amateur historian says he’s actually on the other side of town. 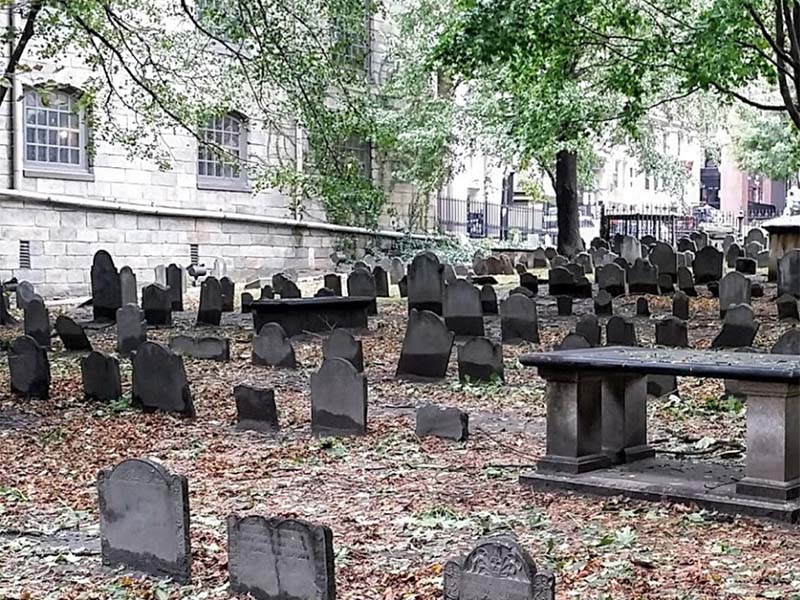 Tuesday marks the 200th birthday of Henry Wadsworth Longfellow, an event that has occasioned a commemorative US postal stamp featuring the poet. No celebration of Longfellow, however, can be complete without also paying homage to Paul Revere, the patriot immortalized in Longfellow’s famous poem about “the midnight ride” of April 18, 1775. And sure enough, Longfellow shares his stamp with Revere, shown on horseback above the poet’s shoulder.

William Dawes Jr., the other midnight rider, has been left out of the festivities, an apt omission, given his absence from Longfellow’s poem. History has been a lax custodian of Dawes, who died 208 years ago today, though just how lax hasn’t been clear until recently: It looks like even the few dedicated tourists who’ve bothered to pay their respects to Dawes have been solemnly standing on the wrong side of town.

Maze, 68, an armchair historian from Dorchester who has given tours of Boston for more than two decades, volunteers one Sunday each month as a guide to the stones and stories of the Forest Hills Cemetery. Reviewing photocopies of cemetery records for a tour last spring that began at the May family lot, he discovered a detail that, he said, “made his heart stop.”

“There I am in my kitchen, looking over the list of Mays buried here, when all of a sudden this name jumps out at me,” Maze said in an interview at the Forest Hills Cemetery. “Dawes! William Dawes! I couldn’t believe my eyes. I had seen these documents before but somehow never noticed his name.”

Maze, like most, assumed that Dawes lay alongside his father and grandfather in King’s Chapel Burying Ground. But he also knew that urban sprawl had forced many of the Revolutionary-era dead out of their original burial plots downtown. 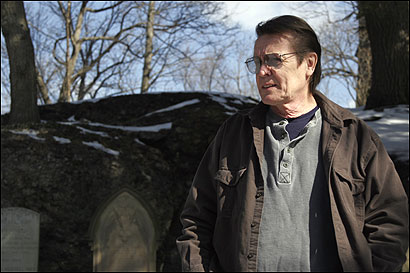 “We think our travels end in the grave, but for some it is just the beginning,” said David Hackett Fischer, Brandeis historian and author of “Paul Revere’s Ride,” a work that bolsters Dawes’s role in warning John Hancock and Samuel Adams on the night of April 18. Fischer considers Maze’s discovery plausible. Throughout the 19th century, Fischer noted, park-like cemeteries appeared on the outskirts of many US cities. He speculated that the development taking place in downtown Boston throughout the latter part of the 19th century could have compelled the move of Dawes’s remains.

Maze turned to the Forest Hills Cemetery’s archives for clues. One document shows a sketch of the 1,738-square-foot Lot 737 and lists 47 names, the majority of which are “May,” the prominent Boston family whose ranks included 19th-century social reformer Samuel Joseph May and Louisa May Alcott, the author of “Little Women.” The 43d name listed, however, reads “William Dawes Mar. 30, 1882 In Tomb, Died 1799.” A note that pertains to names 17 through 43 reveals his previous whereabouts: “These remains removed from Boylston Street Burial Grounds.” There is no mention of King’s Chapel Burying Ground.

“My supposition is that the May family, which Dawes had married into in 1768, had this beautiful lot at Forest Hills and decided to move all of their family out of crowded, noisy downtown,” said Maze. “We saw the same sort of thing happen with Francis Cabot Lowell, who along with his family was moved from the [downtown] burying ground to Forest Hills in 1895, the time of the first ‘Big Dig,’ Boston’s subway system.”

Mehitable May, Dawes’s wife, died in 1793, and Dawes remarried two years later. But Maze noted that there is evidence he remained close to the May family throughout his life. And when his second wife gave birth to a daughter, they named her Mehitable.

“We knew Dawes married into the May family, we didn’t know he was spending eternity with them,” said local historian Charles Bahne, an independent scholar of the American Revolution and author of “The Complete Guide to Boston’s Freedom Trail.”

“I imagine the May family grew tired of all the hustle and bustle downtown as Boston developed throughout the 19th century,” said Maze. “So, in 1882 they decide to ship the whole clan over to bucolic Jamaica Plain.”

The question remains, however, how we came to think Dawes was ever in the King’s Chapel Burying Ground. Maze blames the error on the Sons of the Revolution, a late 19th-century organization whose zeal to celebrate the country’s war of independence perhaps trumped their historical scholarship.

“Let’s just say these guys got a little carried away with their patriotism,” said Maze. “They went all over the city putting up plaques to honor the so-called forgotten heroes of the American Revolution. They probably wandered in to King’s Chapel, saw the Dawes name, and assumed that the son had been buried alongside his father and grandfather.”

“It appears that the 1899 plaque honoring the rider is affixed to the tomb of [William Dawes, Jr.’s] grandfather, Thomas Dawes (1680-1750),” wrote Bahne in a recent e-mail. “As far as I can tell, this tomb was unmarked with any name prior to the placement of that plaque in 1899. Unnamed tombs are not at all uncommon in Colonial-era burial grounds.”

“By the time of Mehitable’s and William Jr.’s deaths in 1793 and 1799,” he continued, “it’s possible that the grandfather’s tomb was already full, which would explain why the couple was buried in Mehitable’s family’s tomb in the Boylston Street Burial Grounds.”

Howard Lange is a fifth-generation descendant of Dawes and president of the Descendants of William Dawes Who Rode Association, a group founded in the early 1970s to address the “imbalance and distortion” in the retelling of the famous ride. Lange said that his organization had never questioned the validity of the King’s Chapel plaque.

“We have an interest in historical accuracy,” said Lange. “If the weight of [Maze’s] evidence is persuasive, we want to be involved in correcting the record.”

It may take funding from a private association such as Lange’s to spearhead a transferring or rewriting of plaques. Kelly Thomas, the project manager of the City of Boston’s Historic Burying Grounds Initiative, welcomed news of Maze’s discovery, while regretting that she doesn’t have the means to do much about it.

“Our limited resources go into preserving what still exists,” said Thomas. “I wish we had the time and money to check the accuracy of headstones. Of the 16,000 grave-markers in our sites, many have been moved and more than half lack names or dates. We welcome people like Al who provide missing pieces to the puzzle.”

Moving among the stones in the Forest Hills Cemetery recently, Al Maze pointed to a well-marked stone nearby.

“Right up there is Joseph Warren, who ordered Dawes to travel on the night of April 18th,” he said. “Warren’s remains bounced around Boston quite a bit before arriving here in the 1870s.” He considered the distance between the two lots, then mentioned that Warren’s medical practice was in the North End, not too far from Dawes’s home on Ann Street.

Credit: Ron Fletcher – Ron Fletcher, a teacher and frequent contributor to the Globe, is working on his first novel. He can be reached at fletcher@globe.com.

How To Be A Good Ancestor By Andrew Recinos, President Tessitura Network 29 October 2019…