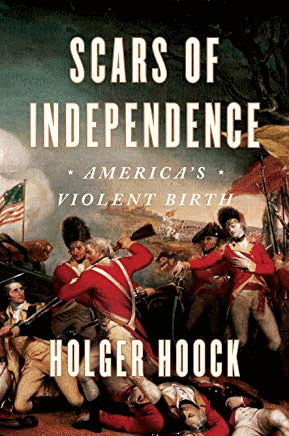 Holger Hoock’s grimly detailed “history of violence” in the conflict between Great Britain and its rebellious colonies across the Atlantic offers a sobering corrective to the sanitized version of the American Revolution passed down through generations by the victorious United States. He paints a disturbing picture of what was in many ways a civil war, with both sides committing atrocities. He also provides a fascinating case study in the power of myth-making — and it seems only fitting that even at the birth of their nation, the Americans had a better grasp of the need for good publicity.

Perhaps it takes a German-born professor of British history, currently at the University of Pittsburgh, to treat this highly charged subject so evenhandedly. His first chapter, “Tory Hunting,” begins with a grisly description of the tarring and feathering of an unpopular customs official in 1774. This was one of the myriad ways Colonial vigilantes “debased and defiled, humiliated and dehumanized, their Loyalist neighbors,” Hoock comments. Persecution became official after the Declaration of Independence, when Congress and the states passed confiscation and banishment acts.

Britain responded with “desolation warfare.” British warships bombarded coastal towns; Falmouth, for one, was reduced to a smoking ruin. The redcoats looted indiscriminately, seizing crops and property of rebels and Loyalists alike; plunder was often accompanied by rape. Some British commanders instructed their men to take no prisoners; wounded and defeated American soldiers were killed on the field. When they were made prisoners, American soldiers suffered in conditions so terrible that mortality rates ran as high as 70 percent.

Hoock coolly reminds us that the looting and appalling prison conditions were consequences of the limited resources available to an army engaged in war thousands of miles from home, while the abuse of civilians and execution of defeated soldiers were rooted in the view that colonials were traitorous rebels to be suppressed by any means necessary.

Unfortunately for the British, these brutal tactics handed the Americans a priceless propaganda opportunity, which they exploited relentlessly. The war had barely begun when, in January 1777, Congress appointed a committee to investigate allegations of British war crimes; such a fact-finding mission, Hoock notes, was “unprecedented.”

The committee’s report, which included some wrenching first-person testimonies, “carried significant political and moral weight with audiences both at home and abroad,” Hoock states. It was part of the revolutionaries’ consistent and successful strategy to depict the British as barbarous oppressors who employed excessive violence, while General George Washington and his troops scrupulously observed the accepted 18th -century rules of civilized warfare.

Washington comes across in Hoock’s balanced, unvarnished portrait as morally principled (with significant blind spots) and ruthlessly pragmatic. Any Continental soldier caught looting was flogged, and Washington persistently begged Congress to maximize this deterrent by raising the number of lashes he was permitted to administer. He insisted that Americans treat their prisoners of war humanely, and generally they did, but apparently he did not consider Britain’s Iroquois allies human beings. The book’s most appalling chapter takes its title from the name the Iroquois gave Washington: “Town-Destroyer.” Under his orders, the Continental Army carried out a punitive campaign that decimated the Iroquois’ crops and homes, with the avowed goal of “the total ruin of their settlements.”

Scorched-earth tactics employed against Native Americans raised hardly an eyebrow, but when the increasingly desperate British inflicted them on the white South, Hoock writes, it “alienated a war-weary population while reminding them of the purpose of their continued struggle.” Racism also played a role; Southerners were outraged that the British promised freedom to slaves who fought for them and used mixed-race raiding parties to attack plantations. One stark fact epitomizes the moral messiness Hoock captures in such depth: Slaves owned by Washington and Thomas Jefferson were among those who fled to the British, and both men unabashedly retrieved their human property after Cornwallis surrendered at Yorktown.

Washington went on to advocate reintegrating Loyalists into society with full rights and properties restored. He believed, Hoock writes, that “[a]fter winning the moral war . . . America also had to win the peace by conducting itself in accordance with international law and enlightened ethical standards.” Those words ring slightly hollow, coming near the end of a narrative that demonstrates how fluid and self-serving ethical standards could be, but there’s no implication that Washington didn’t mean what he said. Like any truly valuable history, “Scars of Independence” eschews comforting good/bad dichotomies in favor of assessing the past in all its complexity and ambiguity.

Wendy Smith, a contributing editor at The American Scholar and Publishers Weekly, reviews books for The Washington Post.