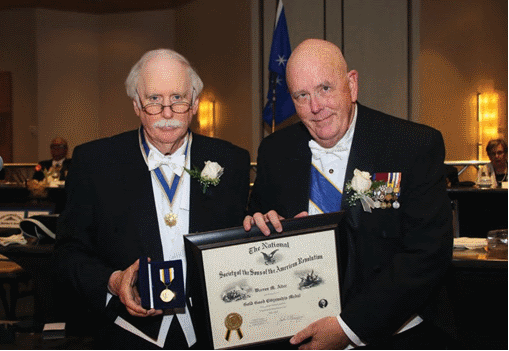 The 129th Congress, hosted by the California Society, July 6-10, attracted 205 compatriots and numerous dignitaries and guests to the Hilton Orange County in Costa Mesa, California. Many of the events were held at the hotel. The California Society Welcome Reception took place on the Hornblower Harbor Dinner Cruise on nearby Newport Bay. The reception featured music, dinner and sightseeing from the upper deck.

Prior to the official opening of Congress, there were numerous trips and social events, including tours of the Huntington Library and Gardens, the Lyons Air Museum and the Richard Nixon Presidential Library.

The Sunday Memorial Service was held at the Saint Andrews Presbyterian Church in Newport Beach in honor of the 694 compatriots who passed away during 2018. Those receiving special mention included President General (2012-13) Stephen A. Leishman of Delaware.

Under the direction of Chaplain General Rev. Dr. John C. Wakefield, the service featured violin and piano selections by Dr. and Mrs. M. Kent Gregory and Jung-A Lee, organist. The readings were made by several Presidents General and other members of the Chaplains Committee.

The opening session included the posting of colors, a benediction and greetings from many California dignitaries, including a state senator and the mayor of Costa Mesa.

DAR President General Denise Van Buren addressed Congress. Others bringing greetings included the Children of the American Revolution, the Sons of the Revolution, the General Society of the War of 1812, the Founders of North America, Decendants of Washington’s Soldiers at Valley Forge, Mayflower Decendants and the Military Order of Foreign Wars.

The afternoon session opened with the presentation of the Gold Good Citizenship Medal to Compatriot Mike Rowe of the television show Dirty Jobs, who delivered an acceptance speech via voicemail. 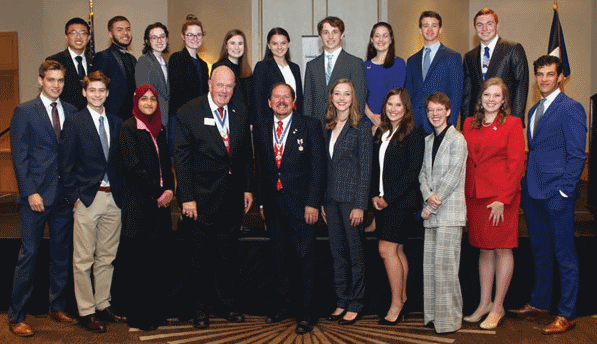 The most significant legislative changes were housekeeping in nature. Dues and fees remained the same for 2019. Between the business sessions were committee meetings and educational opportunities, including Tuesday’s session by Dr. Patrick Cecil entitled “Knocked Down, But Not Out: Quakers in the Revolution.”

Tuesday evening’s guest speaker was Capt. J. Charles Plumb, an Annapolis graduate who flew 74 successful combat missions over North Vietnam before being shot down five days before he was to be discharged. He spent the next 2,103 days as a prisoner of war in Communist prison camps. His rivoting speech discussed his life in an 8-by-8-foot cell and how overcoming adversity, no matter how difficult, can propel us beyond our self- imposed limits.

On Wednesday afternoon, many attendees took the San Juan Capistrano Mission tour before returning to the hotel to get ready for the formal installation banquet