“Liberty Tree Plaza is an iconic landmark in the Chinatown neighborhood,” said Walsh, addressing a crowd that gathered for the opening ceremony. “The Sons of Liberty rallied here in 1765. The original elm tree was a symbol of the American Revolution and a call for freedom. Today this plaza serves as a reminder of what can be possible when people come together, and particularly when Bostonians come together.”

The newly renovated plaza at 2 Boylston St. features new paving, lighting, and landscaping, as well as a stone monument with an inscription that explains the historic significance of the site. There is also an elm that was planted in honor of the original Liberty Tree.

There will also be movable tables and chairs on the plaza for people to use, “which are not out here today because it’s too cold,” the mayor quipped.

The last time the plaza was renovated was around 1976, according to city officials.

“If you remember what this plaza looked like before . . . it was not like this,” Walsh said. “I walked through here one day, and the bricks were coming up and there were bricks missing . . . it was awful. And I said, we gotta do something here.”

The original Liberty Tree was planted in 1646, and the elm became famous after the Stamp Act was passed in 1765. One day in August 1765, an effigy of Andrew Oliver, the man in charge of collecting stamp taxes, was hung from the tree. The effigy bore his initials along with the following verse: “What greater Joy did ever New England see/ Than a Stampman hanging on a Tree.”

The Liberty Tree was cut down by a group of Loyalists in 1775. A Boston Globe article from 1878 described the scene like this: “Armed with axes they made a furious attack upon it and after a hard tussle they cut down a tree because it bore the name of Liberty. Some idea of the size of the tree may be formed from the fact that it made fourteen cords of wood. The jesting at the expense of the Sons of Liberty had a sorry conclusion: one of the soldiers in attempting to remove a limb fell to the pavement and was killed.” 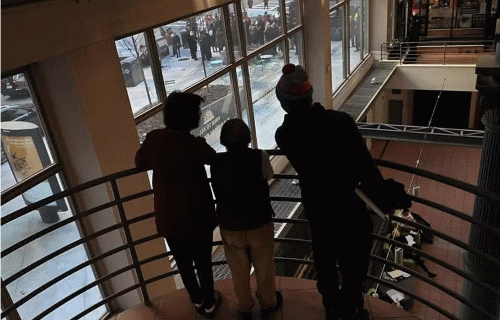 Brian P. Golden, the director of the Boston Planning & Development Agency, also spoke at the ribbon-cutting ceremony and said the plaza is a “beautiful spot” that will serve residents and visitors well.

“This is an inviting place — it’ll be even more inviting during the good weather,” Golden said.

The inscription on the new monument reads: “Liberty Tree Plaza commemorates the public space where ordinary people gathered to bring about extraordinary change. Across Washington Street stood the stately elm that was known between 1765 and 1775 as ‘Liberty Tree.’ It served as a rallying point for colonists protesting the British imposed Stamp Act in 1765 and became an important symbol of their cause. These ‘Sons of Liberty’ began the struggle that led to the Revolutionary War and American independence.”

The $1.3 million reconstruction project was focused on making the plaza more attractive and accessible to the community.

“This is an exciting day for Chinatown,” Walsh said.