by Scott K. Fish
Special to the Piscataquis Observer
June 5, 2018

Driving two-lane back roads along miles of woods, bordered and interwoven with old stone walls, I was exploring new areas of rural Maine. Up and down a rise in the road, around a curve, I see a red-winged blackbird perched on a lone cattail stalk rising from a small roadside wetland. Across the street a small cemetery catches my eye. I stop and visit.

White marble and gray slate headstones, here and there, lean this way and that. Three headstones have American flags secured in metal Sons of the American Revolution Patriot grave markers.

The cemetery I was visiting, with the red-winged blackbird standing guard, is Briggs Cemetery. Fighting encroaching wetlands and woodlands, this is the final resting place of a few members of those one-third of colonists willing to fight and die for their freedom and ours. Gersholm Holmes, dead in 1854 at age 87, and Beniah Niles, dead at age 89 in 1836 are here. 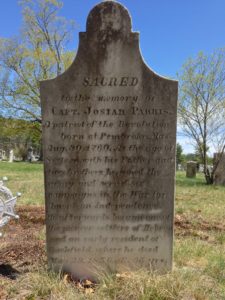 Gravestone of Capt. Josiah Parris, who fought in the Revolutionary War. He is buried at a cemetery in Buckfield, Maine. (Scott K. Fish photo)

So is Major William True (1760 – 1855) noted on his headstone as “A Soldier of the Revolution.” When I came up empty looking for background on Major True, friends online came to the rescue. Mike Edgecomb referred me to Maj. True’s info in “Massachusetts Soldiers and Sailors of the Rev. vol. 16 page 76.” Bob Stone had info on True’s family and residence.

Nancy Townsend Johnson located an Ancestry.com family story of William True, Jr., including an entry on Major True’s burial from Horace True’s diary of April 12, 1855: “I went with James to dig a grave for Grandfather, etc., James dug grave. got load of wood, got home load of straw in morning.”

In other words, we remember Grandfather True, and life goes on.

In the last couple of years, whenever I find an American Revolution patriot’s grave, I take a photo of the headstone and upload it to my Facebook photo album. I want to find out to what extent public records are kept of these Maine patriot grave sites. It seems to me an online map, a Maine American Revolution Patriot’s Grave trail, should be of interest, of value.

Walking May 12 in what appears to be the oldest section of the Buckfield-Damon Cemetery I found Capt. Josiah Parris’s grave. Capt. Parris’s headstone says, in part:

“Patriot of the Revolution. At the age of Sixteen with his Father and two brothers he joined the army and served six campaigns in the War for American Independence.”

A website dedicated to Capt. Parris tells us, “[H]e served…a portion of every year during the [American Revolution]. He was in six campaigns and several battles and during some periods of his service was under [General George] Washington and [Marquis de] LaFayette. In later years [Parris] often spoke of the Father of our Country with affection and reverence and of his bearing and characteristics.”

These soldiers — and their families — risked everything to be free. We are still their beneficiaries. There has to be a local solution for perpetual upkeep of these graves, because plenty of them are gone or deteriorating. As forever keys to Maine’s and the nation’s history we should preserve them. Ideas welcome.

Meanwhile, I will keep adding photos with locations to my online album.