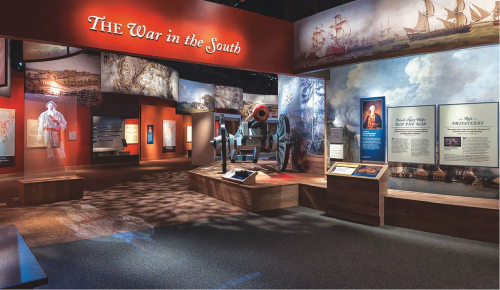 Paid visitation in 2017 at Jamestown Settlement and the new American Revolution Museum at Yorktown, living-history museums operated by the state’s Jamestown-Yorktown Foundation, totaled 610,844, an increase of 7.7 percent from 2016. Admissions revenue amounted to $6.2 million in 2017, up 12.3 percent.

“Growth in individual and group visitation at the American Revolution Museum at Yorktown is reflective of the positive public response from locals and out-of-town visitors to the new museum,” said Jamestown-Yorktown Foundation Senior Director of Marketing and Retail Operations Susan Bak. “Both museums benefited from extensive media coverage and paid advertising efforts to promote year-round special experiences, exhibitions and events.”

Battlefield, as well as Busch Gardens and Water Country USA, to strengthen the area’s prominence as one of the nation’s premier American Revolution destinations.”

In addition to paid visitation, there were a total of 78,801 complimentary admissions at the Jamestown-Yorktown Foundation museums in 2017, including children under 6, group escorts, promotional admissions and residents of the City of Williamsburg and James City and York counties.

The new American Revolution Museum at Yorktown, located on Route 1020, features immersive films, exhibition galleries and interactive living-history experiences in outdoor re-creations of a Continental Army encampment and Revolution-era farm. This year, the museum will present a range of special programs and a special exhibition opening in June that will examine American, French and British artillery used on all fronts of the American Revolution.

Jamestown Settlement, on State Route 31 just southwest of Williamsburg, features expansive exhibition galleries and films that connect visitors with the lives of the Powhatan, English and west-central African cultures that converged at 17th-century Jamestown, and historical interpretation in outdoor re-creations of a Powhatan village, 1607 English ships and Colonial fort. Special events and lectures will be offered throughout the year, including a year=long exhibition debuting in November that will explore captivating and little-known stories of the women in Jamestown and early Virginia, in observance of the 400th anniversary of key historical events in Virginia with the 2019 Commemoration, American Evolution.

Jamestown Settlement and the American Revolution Museum at Yorktown are administered by the Jamestown- Yorktown Foundation, an agency of the Commonwealth of Virginia, accredited by the American Alliance of Museums.

A Visit With Compatriot Congressman Howard Coble Of North Carolina