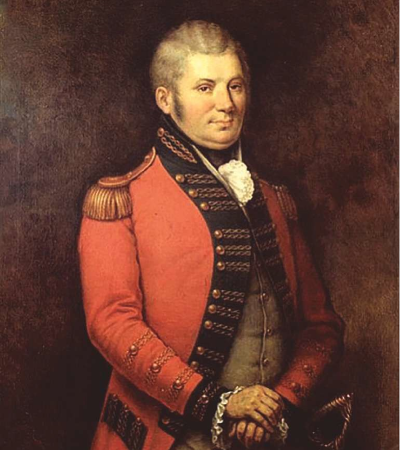 An ill-fated British raid along New Jersey’s Raritan River ended in the capture of one of King George’s most renowned officers.

John Graves Simcoe entered the Revolutionary War as a junior officer with great promise. His fame has been revived by the AMC series Turn: Washington’s Spies which portrays him as a villain, but the TV Simcoe bears little resemblance to the real one. Simcoe began his service as an infantry ensign in Boston on June 17, 1775, the day the Battle of Bunker Hill was fought. He first saw combat as a captain in the Battle of Long Island and distinguished himself at the Battle of Brandywine Creek, where he was wounded. After being promoted to major, he took command of a Loyalist light infantry corps called the Queen’s Rangers, or Simcoe’s Rangers.1

An elite force that used stealth and bayonets in “no quarter” night attacks, the Queen’s Rangers gained a ruthless reputation among the Patriots. In the predawn hours of March 21, 1778, they attacked the Hancock House in southern New Jersey, killing two dozen sleeping militiamen and even the Loyalist owner, Judge William Hancock. The next morning on the Sabbath, the Tories taunted the locals with crimson bayonets, bidding them, “Behold the blood of your countrymen.”2 Simcoe was made lieutenant colonel several weeks later before participating in the Battle of Monmouth near Freehold, New Jersey.3

In mid-1779, Gen. Sir Henry Clinton received intelligence about a planned invasion of Manhattan by Continental troops in flat-bottomed barges (“bateaux”). In the fall, Clinton learned vessels were being staged on the Raritan River near New Brunswick. Simcoe conceived a daring mission to destroy them and capture New Jersey Gov. William Livingston. Clinton approved the plan.4

New Brunswick was a Patriot stronghold and home to Henry Guest and his son, Capt. Moses Guest of the Middlesex County militia. Their Quaker forebears, George and Alice Guest from Birmingham, England, were among Philadelphia’s first settlers before William Penn’s colony was chartered.5 Henry counted John Adams, Thomas Paine and Gen. Lafayette among his correspondents. When the British occupied the town in 1776, they evicted Henry from his home. To avenge his father, Moses waited for the right moment to storm the house with his troops and took it back from the Redcoats.6

At 3 a.m. on Oct. 26, 1779, some 300 Queen’s Rangers were ferried from Staten Island to South Amboy at the mouth of the Raritan River. Leaving a force behind to cover his withdrawal, Simcoe took 80 mounted men up the Raritan’s south bank. Their green jackets and tan breeches resembled the uniforms worn by Maj. Henry Lee’s Continental dragoons, who were in nearby Englishtown.7

Along the way, Simcoe posed as one of Lee’s officers and detained civilians he encountered on the pretext that they were suspected Loyalists. The Rangers stopped a man named Crow, who explained he was just “out sparking” (courting), but he was arrested and sent to the rearguard.8 Hell-bent, Simcoe rode on for Van Veghten’s Bridge, where he planned to destroy the 50 bateaux reportedly moored there.

At Quibbletown, several Rangers dismounted to chase men they thought were rebel militia. Someone recognized Simcoe and quickly warned Gov. Livingston. The Rangers proceeded to Col. Phillip Van Horne’s house, where Simcoe had been informed Livingston was staying, but he was not there. Next, they rode to the Dutch Meeting House. As they burned forage there, a shot was fired at Simcoe from across the river. He had lost the element of surprise.

When Simcoe arrived at Van Veghten’s Bridge, he found only 18 bateaux, which he incinerated with grenades. He set out from there, looking for a house at a crossroads where he would turn toward New Brunswick. Unaware the house had been burned by British troops, he missed the turn and kept going, now anxious about the din of musketry behind him. Two miles from New Brunswick, near De Mot’s Tavern, Simcoe approached a gap in a rail fence at full canter. His journal describes what happened next:

“Determining to pass through this opening, I saw some men concealed behind logs and bushes, between me and the opening I meant to pass through, and I heard the words ‘now, now’ and found myself, when I recovered my senses, prisoner with the enemy, my horse being killed with five bullets, and myself stunned by the violence of my fall.”9

Simcoe had ridden headlong into an ambush set by Capt. Moses Guest, who may have been the officer shouting “now, now” to open fire. Capt. Guest wrote:

“Soon after getting on the road leading from the Millstone village to the bridge, I was informed by an express that the enemy was within a few hundred yards of me. I had just time to get to an open piece of woods, when they made their appearance. We attacked them as they came up, but they came on so rapidly that we could only give them one discharge. Colonel Simcoe’s horse received three balls, fell on him and bruised him badly … I left a physician with Simcoe, and proceeded on.”10

As Simcoe lay barely conscious, a militiaman was about to bayonet him when another named “Mariner” deflected the blade, exclaiming, “Let him alone the rascal is dead enough.”11 Simcoe was exchanged two months later and dispatched to Charleston, where he got a report that “Mariner” had been captured. A grateful Simcoe wrote to Clinton to arrange a parole for his savior.12

Simcoe served postwar in Parliament and as lieutenant-governor of Ontario. He often told American visitors he hoped one day to meet the officer who captured him, but they were never reunited.13 Moses Guest wed Lydia Dumont in 1792 and they had 11 children. They moved to Cincinnati in 1817 where Moses lived to age 72.14

The final victory won by Capt. Guest and his compatriots spread the cause of liberty far beyond their new republic.

250th Series: 250th Anniversary of the Boston Massacre From the Viewpoint of the Colonies