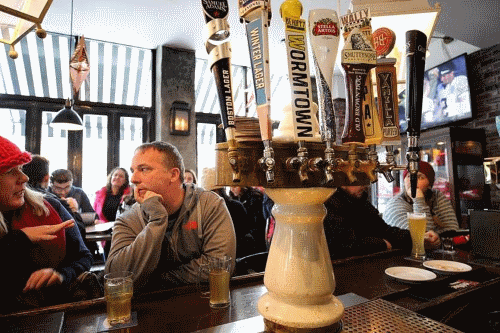 The Bell in Hand, between Union and Marshall streets, still uses its original bar, says its manager. (SUZANNE KREITER/GLOBE STAFF)

Boston, Ma., 12/29/17, The Bell in Hand. Three pubs lay claim to the oldest in Boston — the Warren Tavern in Charlestown, and the Bell in Hand and the Green Dragon near Haymarket.


Boston has been a drinking town through nearly 400 years of Puritan brewers, ale-quaffing patriots, drunken sailors, and picky millennials in search of the latest craft beer infused with grapefruit.

But in a city meticulous about its past, finding the oldest tavern can be a Byzantine quest. Prepare to burrow past dubious marketing pitches bolstered by obligatory knockoffs of Paul Revere portraits hung under rough-hewn beams and low, dark ceilings.

It’s enough to make the curious reach for a pint, and then another, to bring order — or not — to the competing claims and counterclaims of three popular finalists for the bragging rights.

There is the Green Dragon Tavern, near Haymarket, which trumpets a 1657 birthdate and dubs itself the “headquarters of the Revolution,” as well as the place where Revere embarked for his midnight ride on April 18, 1775.

A few cobblestones away is the Bell in Hand, which opened in 1795 and boasts of being the oldest continuously operating tavern in the United States.

And then there is the Warren Tavern, a Charlestown landmark that was rebuilt after the Battle of Bunker Hill and began serving alcohol in 1780, more than a decade earlier than the Bell in Hand and allegedly a century later than the Green Dragon.

The Warren Tavern, despite the math questions, has no qualms in calling itself the oldest in the state. “You know what? People will think what they want,” said Kim Mahoney, the Warren’s longtime manager.

But most urban legends, especially ones obscured by centuries of glassy-eyed toasts, contain far more fiction than fact.

An earlier Green Dragon, for example, apparently was razed in the 1850s on the corner of Union and Hanover streets, only to resurface nearby in 1993 as an Irish entrepreneur’s paean to the courage of Boston’s revolutionaries.

“I get into battles with historians,” said Sean Somers, whose father, John Joe Somers, opened the new Green Dragon in Boston. “But I’m so passionate about this place, just because of the sheer fact that the freedom we have is partially due to the Green Dragon.” 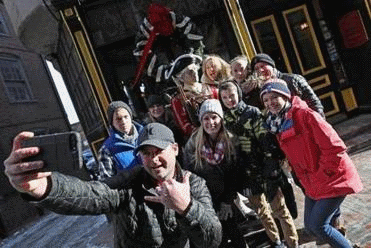 The place mats, covered in historical notes, do not tell the thirsty tourist that this venue came long after Boston’s infancy. In fact, Somers said, the 1657 date is believed to be his immigrant father’s swipe at the notorious rule of Oliver Cromwell, an English leader who terrorized Ireland’s Catholics.

The restored tavern is a tribute to later foes of British rule.

“My father researched the history and said, ‘Hold on a second. This is right in the area where the Green Dragon was,’ ” said Somers, the tavern’s publicity director. “He brought the name back to where it was supposed to be.”

The Bell in Hand, sandwiched between Union and Marshall streets, is in its third location but has been pouring drinks nonstop — Prohibition excluded — since 1795, general manager Luis Luna said.

One recent visitor looked around the main room and pondered its history. “Turn the clock back, and what would it have been like?” asked Mike Wright, 52, of Easton. “After all is said and done, it would have been a place to talk. How was your day? It’s about friendship and having a drink together.”

The Bell in Hand still uses its original bar, Luna said, and was first opened after the Revolution by Boston’s town crier near today’s Government Center subway stop. The pub has moved around the neighborhood, he added, but only the 18th Amendment stopped the flow of alcohol.

“The others all closed for extended periods of time,” Luna said of his historical rivals.

But at the Warren Tavern, which looks up at the Bunker Hill Monument, no such concession is forthcoming. Tom Coots, president of the Charlestown Historical Society, said the tavern closed only for short intervals between owners over 237 years. “Its primary function since it opened has been as a tavern,” Coots said.

Boston, Ma., 12/29/17, Jason Rose, of Bow, NH, takes a photo in front of the Green Dragon. Three pubs lay claim to the oldest in Boston — the Warren Tavern in Charlestown, and the Bell in Hand and the Green Dragon near Haymarket. Suzanne Kreiter/Globe staff

In any event, the tavern has been in the same location since 1780, which is a claim that no other contender can make. “Charlestown doesn’t get the respect it deserves as a historic part of Boston,” Mahoney said.

Named for Dr. Joseph Warren, a patriot leader killed at Bunker Hill, the original tavern was burned by the British. But it was rebuilt five years after the battle, and the old timbers that form its bones on Pleasant Street evoke the days when George Washington and Revere — that name again — are said to have tossed one back there. 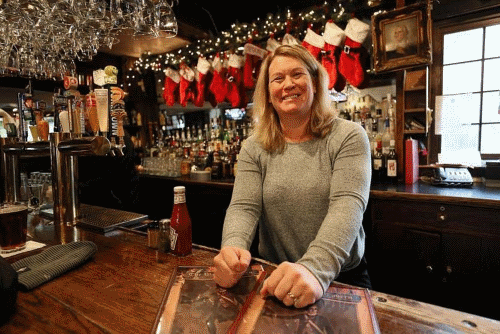 Kim Mahoney is the manager of the Warren Tavern in Charlestown. (SUZANNE KREITER/GLOBE STAFF)

What is certain is that no Boston tavern remains from the beginning of the Revolution. But the many taverns that flourished then would have been essential to the town’s social and economic life, said Robert Allison, a Suffolk University history professor who has written extensively about Boston.

Taverns were places where lodging was available, business conducted, court cases heard, money changed, and newspapers circulated from reader to reader. And, of course, they served beer and rum to patrons who generally drank much more than people do now.

“There was a fear of drinking water because it carries bacteria,” Allison said. “Brewing it into beer is one way of killing something that might kill you.”

Today, the difference between “oldest tavern” and “oldest continuous operating tavern” and whether Revere really did drink at them all — he probably did — are left for historians to determine.

“We just let anybody do what they’re going to do,” said Somers, of the Green Dragon. “We’re really a community of old taverns. If you’re going to nitpick who said what, that’s not the kind of people we are. There’s plenty to go around for everyone.”

But someplace, for the record, has to be first.

“The real oldest one in Boston? It might be the Warren Tavern,” said Ed Holda of Beacon Hill, sitting at the bar of the Green Dragon.

Surrounded by emblems of the Revolution, Holda was asked if he came for the history.