Four days before the Battle of Princeton, the Continental Army almost ceased to exist. Gen. George Washington began the summer of 1776 with 24,000 soldiers, preparing to meet the British in New York. The defeat of his army at Brooklyn was followed by defeats that resulted in the loss of Fort Washington, Fort Lee and New York City, the best harbor in America, along with tons of supplies and thousands of men. By Christmas, he had only 6,500 men left, many whose enlistments were set to expire in six days, on Dec. 31. Thomas Paine wrote, “These are the times that try men’s souls!” Washington promised $10 for each man and begged his men to reenlist, saying, “If you will consent to stay one month longer, you will render that service to the cause of liberty and to your country which you can probably never do under any other circumstances!” About 3,300 men chose to remain. 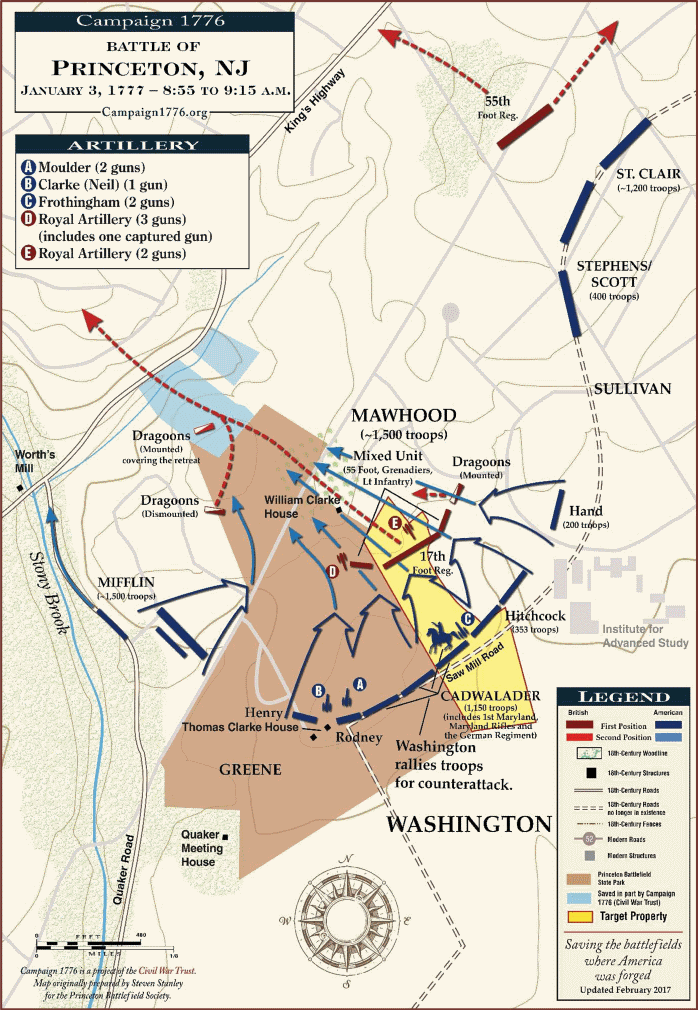 Washington, after his victory over the British-hired German Hessian mercenaries at Trenton on Dec. 26, 1776, expected a British counter-attack, and positioned his army on the south side of Assunpink Creek, southeast of Trenton. On Jan. 1, British commander Lord Charles Cornwallis reached Princeton. On Jan. 2, Cornwallis left 1,500 troops at Princeton, and led 5,000 troops toward Trenton. Washington sent a mixed force of infantry, militia and artillery to slow Cornwallis. It was successful; the British arrival at Trenton was delayed until just before sundown, which allowed Washington’s army to bloodily repulse three twilight British assaults. But Washington and his 5,000 troops, mostly militia, with their boats upstream, were against the Delaware River. Cornwallis, confident of victory the next day, called off the attack, saying, “We’ve got the old fox safe now. We’ll go over and bag him in the morning!”

Washington called a council of war. One of his cavalry officers had discovered a back road to Princeton. Their decision was to steal a night march, maneuver around Cornwallis’s left flank, march 18 miles and attack the British garrison at Princeton. The Continental troops muffled their wagon and artillery wheels, and anything that could make noise. By 2 a.m., the army quietly began its march to Princeton. Washington left behind two cannons and 500 men to keep fires burning and make noise with picks and shovels to make the British think they were digging in. These men left before dawn. When the British marched to attack the next morning Washington and his army were gone!

As the Americans approached Princeton, British troops under British brigade commander Lt. Col. Charles Mahood were marching to Trenton as ordered. They spotted the American vanguard and fighting flared. Infantry blazed away at each other from 40 yards, until the redcoats launched a furious British bayonet attack. American Gen. Hugh Mercer’s brigade was routed. Mercer, in his attempt to stem the rout, fighting off blows with his sword, was bayoneted seven times, mortally wounded and left for dead, as were many other officers and men. It was into this chaos that, historian Richard M. Ketchum said, “A tall man on a white horse could be seen galloping toward the battle.”

With his men behind him, Washington gave the order to advance and led them to within 90 feet of the British line, ordering “Fire!” The British returned fire. Historian W.J. Wood wrote, “Colonel John Fitzgerald of Washington’s staff, covered his eyes so that he would not see his commander blasted from the saddle. Yet as the smoke began to clear, there was Washington, standing in his stirrups, calmly waiving his men forward.” The British broke and ran, with Washington shouting, “it’s a fine fox chase my boys!” as he led the pursuit. At Nassau Hall, College of New Jersey, now Princeton University, the British waved a white flag and surrendered. Washington had won the Battle of Princeton and saved the American Revolution.

As Pulitzer-prize winning journalist for The Washington Post, George Will wrote in his column of April 8, 2016, “A Battle to Save a Battlefield,” “… If George Washington’s audacity on Jan. 3, 1777, had not reversed the patriots retreat and routed the British, the American Revolution might have been extinguished … the battle to save this battlefield, one of the nation’s most significant and neglected sites is not yet lost …”.

Maxwell’s Field on the Princeton Battlefield, where Washington rallied his troops and saved the American Revolution, is in jeopardy (see map). The Institute for Advanced Study (IAS), a prestigious non-profit organization unaffiliated with Princeton University, owns the land. IAS was bulldozing Maxwell’s Field to construct faculty housing, but, as a result of herculean efforts by the Save Princeton Coalition (which includes the Civil War Trust-Campaign 1776, the Princeton Battlefield Society, the Society of the Cincinnati, the American Association for State and Local History, the National Coalition for History, the National Parks Conservation Association, the National Trust for Historic Preservation, the British Veterans Association of the Royal Leicestershire 17th Regiment of Foot [defeated by Washington’s troops at Princeton], United Kingdom Battlefields Trust, and numerous other patriotic organizations, politicians and individuals around the world) IAS halted construction and entered into a binding contract to sell 14.85 acres of Maxwell’s Field for $4 million to the Civil War Trust-Campaign 1776 (www.civilwar.org/give/save-battlefields/save-princeton), the State of New Jersey and the existing Princeton Battlefield State Park. The deadline is Dec. 15, 2017. So far, $2.5 million has been raised. Each $1 donation receives a $1 matching grant, for $2 total.

It was a bitterly cold — 28 degrees — on that clear, windy, Friday morning, Jan. 3, 1777, where the blood of wounded and dying patriots congealed and froze to the ground on Maxwell’s Field. We, as members of the Sons of the American Revolution and all Americans, owe a priceless debt of honor to Gen. Washington, the Patriots who fought there and our Patriot ancestors. If these 14.85 acres of the Princeton Battlefield are saved and added to the Princeton Battlefield State Park, this hallowed ground will be preserved for future generations.