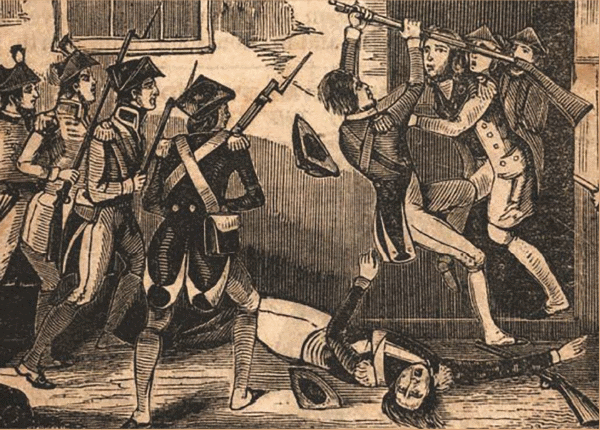 Picture: THE DEATH OF MAJOR KENNEDY AND MOSES DOAN. From the Piratical and Tragical Almanac for 1846. Collection of the Houghton Library, Harvard University (APA.P664A.1846). This fanciful woodcut, published long after the incident, tries to capture the scene in which the outlaw Doan and a member of the militia posse are killed in a cabin near Tohickon Creek.

Reputations are fragile. Mere rumors can shatter them, even rumors first espoused a century later. So it was for Patriot Captain Robert Gibson. The American Revolution was tumultuous and polarizing, turning friends into mortal enemies. Next-door neighbors Robert Gibson and Moses Doan, similarly aged eldest sons in large Quaker families in Pennsylvania, were both born leaders. In 1775, their paths diverged—Patriot volunteer Gibson captained the Plumstead Militia, while “attainted traytor” Doan led a gang of 32 outlaws.

The Revolution ended in 1781, but the Doan Gang’s crime sprees continued. An infamous raid on the Bucks Treasury in Newtown was followed by many more robberies, culminating in a series of assaults on the evening of July 21, 1783. On that terror-filled night, the gang invaded six homes, including Gibson’s. The Bucks community was petrified as the outlaws continued to elude capture.

Shockingly, Gibson was transformed from Patriot captain into Tory outlaw, not then but 92 years later, after a family story was published in Bucks County history books.*

In 1875, William Keachline wrote about Revolutionary days at the Piper Tavern in Bedminster. He described how his brave grandmother, Eve Piper, single-handedly assaulted Gibson and Geddis, called “Doan friends and companions.” She broke Geddis’ arm; he sued, but widespread public wrath forced him to drop the lawsuit. Keachline speculated that Gibson killed Doan to avoid implication in gang crimes.

More than unsubstantiated and implausible, this tall tale is provably false.

The Pipers bought the tavern in 1784, after the Revolution—and even more salient, after the Doan gang essentially disbanded post-shootout. There is no record of any Geddis or Gibson lawsuit. And there is also no Gibson or Geddis on the lists of 32 known gang members.

If militiamen with rifles were afraid to join a 14-man posse to confront three outlaws, surely unarmed Eve Piper would not attack two alone. After Doan robbed Gibson and Gibson killed Doan, no one would call them friends. And no outlaw would initiate a lawsuit, especially when wanted dead or alive.

Furthermore, the silence is deafening. In 92 years, no letter, affidavit, newspaper article or book mentioned Gibson’s gang membership or Eve Piper’s incredibly daring Doan gang scuffle. In spite of such reputed widespread public wrath, there was never any mention by fellow Patriots, Bucks neighbors, 32 Doan gang outlaws, or even Eve Piper herself or her children.

Perhaps Keachline simply confused names and dates. Eve Piper did assault two in the tavern, but it was Elizabeth Overholt and tavern-owner Joseph Braden in 1782. A Gibson and a Geddis did visit the Piper tavern together, but it was to ratify the American Constitution in 1788. Are shattered reputations irreparable? Is Patriot Captain Gibson’s? How can a moment of slander speak louder than a lifetime of actions?

*First published by W.W.H. Davis in his 1876 History of Bucks County, and subsequently recounted in Bucks Histories by Battle (1887) and the Bucks County Historical Society (1904-1920)

The Massachusetts Revolution of 1774

After Long Omission, National Parks To Honor Minorities In Revolution

After Long Omission, National Parks To Honor Minorities In Revolution Information About Blacks, Others Will…