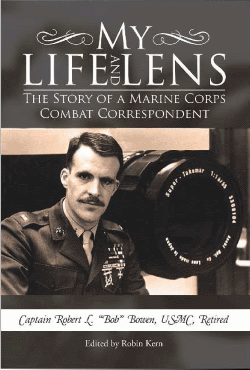 Minuteman and former Historian General Robert L. “Bob” Bowen has published a memoir My Life and Lens: The Story of A Marine Corps Combat Correspondent. The book tells of Bowen’s life — his time in Vietnam, his years of service to the American Legion and his 12 years as an active leader in the Sons of the American Revolution.

It is one thing to provide facts to America’s cumulative history; it’s another to display the facts through personal experience. Readers will learn that the life of a war-zone journalist can be short-lived. It is dangerous work; but when successful, the work informs and it’s what makes Bowen’s book a compelling read. 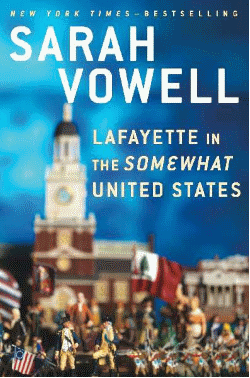 Historian Sarah Vowell has done her usual due diligence and research into primary sources to produce yet another insightful look into history. In Lafayette in the Somewhat United States, she casts a light on an important figure in the War for Independence: the brave, undaunted French teenager who gave his all and more to bring about the defeat of the British forces. Through quotes from letters and contemporary commentators, Vowell paints entertaining portraits of our Revolutionary Patriots, and gives a modern turn to many of her observations. In her usual manner, the author provides an entertaining and easy read, with some humor and local color.

Vowell’s previous books include The Wordy Shipmates, Unfamiliar Fishes, Assassination Vacation, The Partly Cloudy Patriot, Take the Cannoli and Radio On. Compatriot David Galusha reports: “all are insightful and well worth the read, especially if one has a broad interest in history and is looking for the ‘real story.’ ” 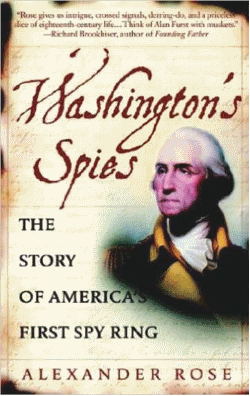 In the summer of 1778, George Washington authorized the formation of a secret chain of agents known as the Culper Ring. Operating in British-occupied New York, this spy ring gathered and shared military intelligence on the British Army’s tactical operations, using a coded language and a disappearing ink dubbed the “sympathetic stain.” Those involved in the Culper Ring were at great personal risk to their lives and honor, covertly traveling through occupied territory and swearing oaths of allegiance to the king—all the while passing information to Washington

Alexander Rose’s Washington’s Spies: The Story of America’s First Spy Ring, describes the establishment of the Culper Ring and the risks involved with 18th-century espionage. It is published by Bantam.

The Wall Street Journal wrote of the book, “[Rose] captures the human dimension of spying, war and leadership … from the naive 21-year- old Nathan Hale, who was captured and executed, to the quietly cunning Benjamin Tallmadge, who organized the ring in 1778, to the traitorous Benedict Arnold.” 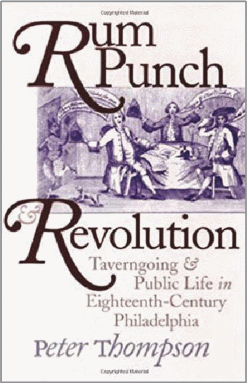 In Peter Thompson’s, Rum Punch & Revolution: Taverngoing and Public Life in Eighteenth-Century Philadelphia, taverns and public houses function simultaneously as private-public spaces where people of “mixed” backgrounds could mingle, drink and eat together. (In this case, mixed does not include slaves, apprentices or Native Americans, who were excluded by law from taverns.) This openness in early tavern culture fostered an environment where men and women of varying social rank would meet and participate in a shared political and social discourse.

In 1773 Philadelphia’s first gossip columnist, “Polinurus Pepper, Esq.,” wrote that he expected the “political, commercial, literary and religious interests of the province” to be “learnedly discussed by many a knot of grave and sensible freeholders” at the City Tavern. Neither Pepper nor the patricians who flocked to the City Tavern believed that learned discussion of provincial affairs was a regular feature of exchanges in most, if any, of Philadelphia’s taverns. Well-to-do Philadelphians subscribed to the new tavern precisely because they were dissatisfied with the conversation, and much else, on offer in the rest of the city’s public houses.

As they sought to breathe life into their expectations, patrons of the City Tavern used the one advantage they had over patrons of the Four Alls: their access to state and congressional leaders.

On the day John Adams arrived in Philadelphia to take up his seat in the First Continental Congress, he was met by a delegation of prominent Philadelphians and whisked away to the City Tavern. Here he received “a fresh welcome to the city” and further introductory conversation. Adams and his fellow delegates were eventually treated to a supper “as elegant as ever was laid upon a table.” Adams was quick to pronounce the City Tavern the most genteel establishment of its kind in America and became a regular patron.

In short, the well-documented history of the rise and fall of this tavern offers a microcosm of the major developments affecting the trade as a whole in the last quarter of the 18th century. University of Pennsylvania Press is the publisher of Rum Punch & Revolution.

Before It Was History, It Was News

Independence Lost: Lives on the Edge of the American Revolution by Kathleen DuVal Published July…