Two Harvard researchers have uncovered a second parchment manuscript of the Declaration of Independence—the only additional manuscript of its type ever to be found.

University Professor Danielle Allen and Emily Sneff, research manager of the Declaration Resources Project found the document, which Allen says dates to the 1780s and was likely produced for the Constitutional Convention.

“No one has ever been aware of its existence,” she said. “From the point of view of thinking about American history, it’s significant.”

According to a press release, the parchment, designated as “The Sussex Declaration,” is housed at the West Sussex Record Office in the United Kingdom and likely once belonged to the Third Duke of Richmond, who supported the colonists who rebelled against Britain. 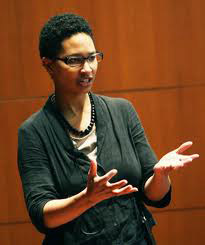 University Professor Danielle Allen, pictured here in 2016, uncovered a second parchment manuscript of the Declaration of Independence. SIDNI M. FREDERICK Allen and her team believe the “leading possibility” for the parchment’s origin is that it was commissioned by Continental Congress delegate—and later Supreme Court Justice—James Wilson or one of his allies in order to advocate for the Constitution.

Sneff said that she uncovered the parchment in August 2015, after seeing a catalogue entry in the United Kingdom’s National Archives for a manuscript of the Declaration on parchment. She and Allen soon realized its unique character.

Allen said the parchment “sheds light” on Wilson, who was “more important than people have realized.”

Most significantly, the parchment’s signatures are not grouped by states, as they are in the original parchment manuscript.

“The team hypothesizes that this detail supported efforts, made by Wilson and his allies during the Constitutional Convention and ratification process, to argue that the authority of the Declaration rested on a unitary national people, and not on a federation of states,” the press release said.

Additionally, the phrase “pursuit of happiness” is followed by a dash only, without a period.

Allen, a scholar of political theory and classics, established the Declaration Resources Project after writing her 2014 book “Our Declaration: A Reading of the Declaration of Independence in Defense of Equality.”

According to its website, its mission is to “create innovative and informative resources about the Declaration of Independence.”

“There are still questions to be answered about the text itself, the signers, and even how news of the Declaration spread around the new United States and eventually the world,” the website says.

Allen and Sneff are presenting their paper on the parchment at a conference at Yale University today.

Staff writer Mia C. Karr can be reached by email at mia.karr@thecrimson.com. Follow her on Twitter @miackarr.

What is your reason for joining a Military Hereditary Society?

By David Allen Lambert The Past Finder July 24, 2017 Being a genealogist I started…

How did it end up in a suburban warehouse? By Paul Berger (http://www.forward.com) It started…