WASHINGTON CROSSING, Pa. (AP) — George Washington and his troops have made their annual Christmas Day trip across the Delaware River. 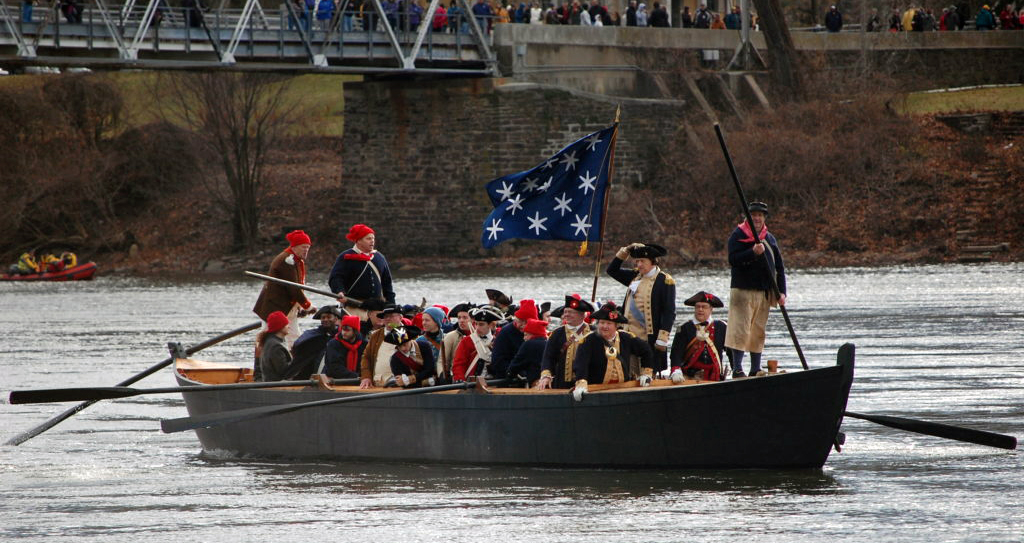 Picture: John Godzieba as Gen. George Washington, second right, stands in a boat during a re-enactment of Washington’s daring Christmas 1776 crossing of the Delaware River, the trek that turned the tide of the Revolutionary War, Sunday, Dec. 25, 2016, in Washington Crossing, Pa. During the crossing, boats ferried 2,400 soldiers, 200 horses and 18 cannons across the river, and the troops marched eight miles downriver before battling Hessian mercenaries in the streets of Trenton. (AP Photo/Mel Evans)

The 64th annual re-enactment of Washington’s daring Christmas 1776 crossing of the river took the group from Washington Crossing, Pennsylvania, to Titusville, New Jersey, on Sunday afternoon.

Each December, thousands gather on the banks of the Delaware River to watch the reenactment of General George Washington’s daring Christmas Day river crossing notes Washington Crossing Historical Park. During this family-friendly event, several hundred reenactors in Continental military dress listen to an inspiring speech by Washington and then row across the river in replica Durham boats.

The reenactment is held each year on December 25 at 1 p.m. Those who cannot attend on Christmas can watch a full dress rehearsal about two and a half weeks before the Christmas Day Crossing. During the dress rehearsal, the reenactors row across the river in uniform just as they do on Christmas, plus additional activities and demonstrations take place throughout the historic village.

The annual Christmas tradition drew large crowds of families and fans of history to both sides of the Delaware River in Pennsylvania and New Jersey.

Boats ferried 2,400 soldiers, 200 horses and 18 cannons across the river during the original crossing. Washington’s troops marched 8 miles downriver before battling Hessian mercenaries in the streets of Trenton.

Thirty Hessians were killed, and two Continental soldiers froze to death on the march.

A rare artifact from a pivotal moment in American history. By Sarah Laskow May 22,…