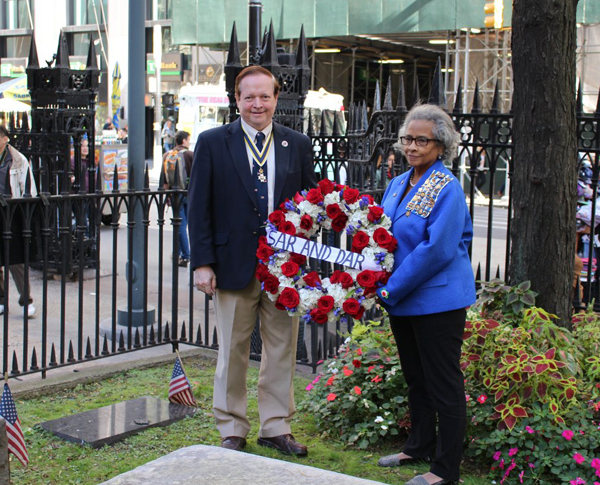 Photo by Bill Egbert. Wesley Oler, president of the 1st New York Continental Chapter of the Sons of the American Revolution, and Wilhelmena Kelly, founding regent of the Increase Carpenter Chapter of the Daughters of the American Revolution, laid a wreath on the grave marker for Gen. Horatio Gates, the hero of Saratoga at the Lower Manhattan Historical Society’s commemoration of the battles of Saratoga and Yorktown on Oct. 15 at Trinity Church.

History buffs gathered at Downtown’s Trinity Church on Saturday to honor the victors of the two most important battles of the American Revolution.

Though the battles were fought far away — in Upstate New York and coastal Virginia — the officers who won them were buried at the church’s storied cemetery.

The battles of Saratoga and Yorktown happened four years apart, but ended on Oct. 17 and Oct. 19, respectively, and those two British surrenders neatly bookend our nation’s fight for independence.

After the loss of New York to the British and a string other setbacks in the early years of the war, General Horatio Gates scored a crucial victory at Saratoga in 1777 that helped Benjamin Franklin convince the French to enter the war against Great Britain — a vital turning point in the revolution.

Just how vital was proved four years later at the Siege of Yorktown, where 10,000 French troops combined with 11,000 Americans to defeat British Lt. General Charles Cornwallis in a battle that effectively won the war. 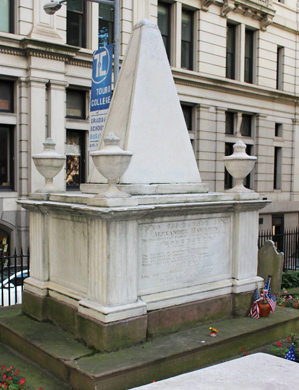 Photo by Bill Egbert. Alexander Hamilton, also buried at Trinity Church, was honored at the ceremony as the hero of the Battle of Yorktown, which effectively won the Revolutionary War for America.

The commander leading the Americans’ assault at Yorktown was none other than George Washington’s most trusted aide — and now a Broadway sensation — Alexander Hamilton. Though it is well-known that Hamilton, a true Downtowner since he emigrated from his Caribbean birthplace, was buried at Trinity Church, it was only recently that historians realized that the hero of Saratoga, Horatio Gates, was also interned in the churchyard, his marker long ago lost to the elements.

“The purpose of this ceremony is to help New Yorkers understand the significance of these very important but often forgotten Revolutionary War heroes, buried right here in Lower Manhattan,” said Jim Kaplan, president of the Lower Manhattan Historical Society, which helped organize the Saratoga and Yorktown commemoration, now in its fourth year.

The ceremony also honored Marinus Willett, a patriot also buried at Trinity who played a critical, if ancillary, role in not one but two famed Revolutionary War battles. Willett was primarily honored on Saturday for his service as a commander at the Battle of Fort Stanwix, which prevented 3,000 British troops from heading north to join the fight at Saratoga and perhaps tipping the balance against Gates.

But Willett first showed his patriot colors two years earlier, right here in Lower Manhattan, just a few blocks from his grave at Trinity Church. In 1775, as a rabble-rousing member of the Sons of Liberty, Willett jumped in front of a British army convoy coming down Broad Street on its way to bring heavy arms to the British forces in Boston in advance of the Battle of Bunker Hill. His dramatic act inspired other patriots to join him, and they prevented heavy weapons from reaching Boston, where they would have made short work of the rebels in that crucial early battle.

In addition to the Lower Manhattan Historical Society, and representatives of the descendants of revolutionary patriots, groups representing French veterans also joined in the ceremony to mark the French contributions to American independence.

Borough President Gale Brewer also attended, and used the occasion to restate her commitment to honoring Lower Manhattan’s rich history — and pointedly cited “keeping the Seaport as an historic area.”