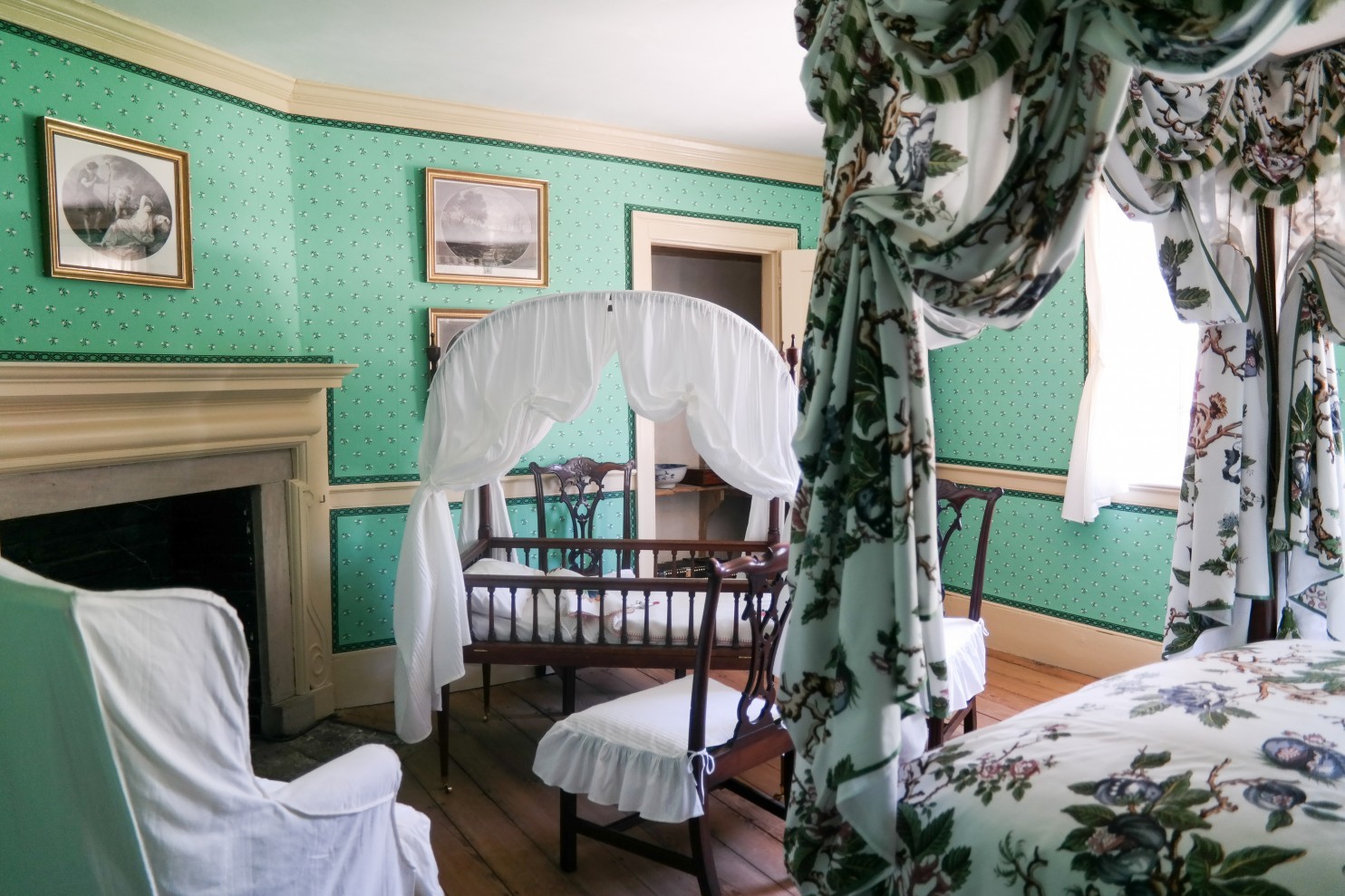 After being closed for almost two years, the Chintz Room in the Mount Vernon Mansion is reopening to the public. Thanks to the first president’s detailed records and new forensic evidence, curators were able to furnish the bedchamber with period objects and reproductions similar in nature to what the Washingtons would have used. (George Washington‘s Mount Vernon)

By Jura Koncius
Home & Garden
The Washington Post
May 6, 2016

The changes in a second-floor bedroom at Mount Vernon may not seem revolutionary to some, but to historians, they are profound.

On Saturday, the room formerly known as the Nelly Custis Bedchamber will be unveiled to reveal a vibrant color palette, richly patterned textiles and fancy trims and tassels that experts say reflect the way it looked in 1799. Now renamed the Chintz Room, this space is one of the major bedrooms in the home of George and Martha Washington. It was last interpreted by curators in 1986 in a much more reserved look: pastel colors with straight, simple curtains and a plain blue wallpaper.

Visitors to Mount Vernon will now see the room decorated in the high style curators have determined was used in elite homes in the late 18th century, featuring exotic botanical print fabrics, Asian porcelains and lacquerware.

This latest interpretation of the room was pieced together using historical evidence unearthed over many years by about 40 museum professionals, including curators, paint specialists, plaster experts, conservation scientists, historians and others. The actual restoration took two years and cost $175,000, according to Melissa Wood, a spokeswoman for Mount Vernon.

The look of rooms in historic homes evolves as research techniques become more sophisticated. Historical research over the past 30 years has turned up new information on style in the latter part of the 18th century. “We discovered that a chintz room was a fashion trend in the mid-18th century. It was an aesthetic in England,” says Amanda Isaac, an associate curator at Mount Vernon. Researchers found other examples of chintz rooms in the United States as well, and references in the Washingtons’ papers that showed they owned fabrics and accessories consistent with the chintz style. 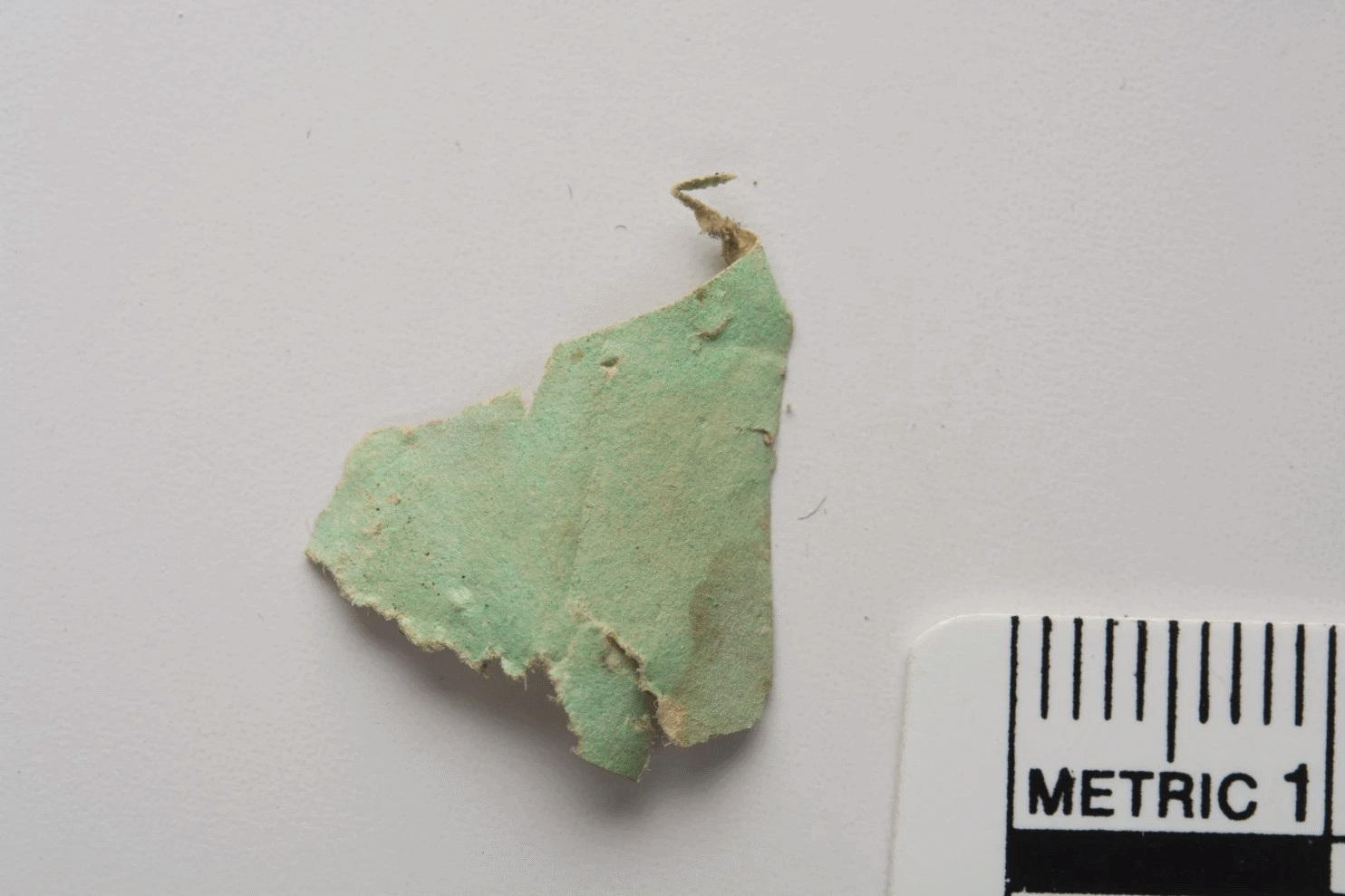 A fragment of 18th-century wallpaper found under the floorboards of the room in 1992. This green verditer pigment was used as the background color of the reproduction wallpaper that is hung in the current restoration. (George Washington‘s Mount Vernon)

Thirty years ago, curators had no record of the wallpaper used in this bedroom, but several 18th-century wallpaper fragments have recently been unearthed. According to Thomas Reinhart, Mount Vernon’s director of architecture, during the restoration, a small fragment of wallpaper about the size of a half-dollar was found tucked behind some plaster. After a forensic paint analysis, it was determined that it was a deep blue and black with wavy lines, a chintz-patterned paper with scrolling vines and flowers. This matched other evidence showing that this room was actually referred to as the Chintz Room by the Washingtons. Curators say this is one of the earliest preserved wallpapers ever found in Virginia. In another lucky discovery, an examination of debris collected under the floorboards of the room turned up another wallpaper fragment, a bright verditer-green example.

“What we do is kind of like ‘CSI,” Reinhart says.

These discoveries prompted them to rethink the room as an example of the chintz style and redesign it to look how the Washingtons would have arranged it in 1799.

The room used to be named for Nelly Custis, a step-granddaughter of George Washington who was adopted by George and Martha Washington and moved to Mount Vernon following her father’s death in 1781. Curators say that Custis used this bedroom for many years. The mahogany crib in the room actually belonged to Custis and had been a gift from Martha Washington. A fancier, more romantic canopy and drapery now embellish the crib.

Mount Vernon room’s new look is actually an old one 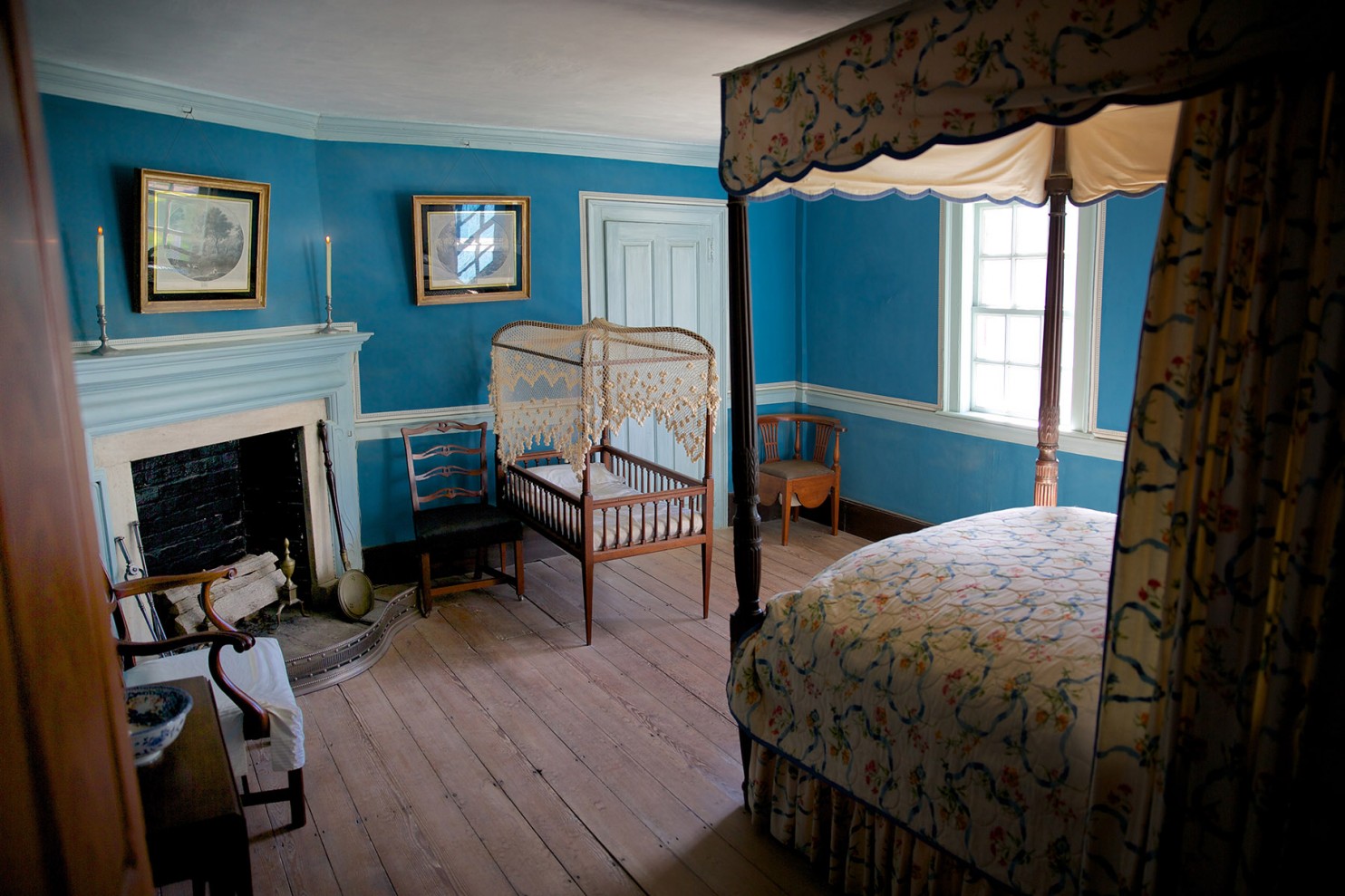 Before the latest restoration: a photo of what the Nelly Custis Bedchamber at Mount Vernon looked like in 2013. (George Washington’s Mount Vernon)

The rooms at Mount Vernon are constantly being reinterpreted. The goal of any changes is to ensure the rooms look as close as possible to the way they did in 1799, the year George Washington died.

“I’m hoping people will be blown away by the vividness of the 18th century and the colors, patterns and textures,” Isaac says. “I think they will think that the 18th century was a far more exciting place than they thought.”

Two of Mount Vernon’s experts will be giving behind-the-scenes talks on the history and evolution of the Chintz Room on Saturday at 1 p.m. and again at 3 p.m. at the Robert H. and Clarice Smith Auditorium at Mount Vernon. Thomas Reinhart, deputy director of architecture at Mount Vernon, will present the evolution of the room from 1735 through the present day. Amanda Isaac, associate curator, will explore the chintz revolution in Britain and how the Washingtons translated it at Mount Vernon. The lectures are free but do not include admission to the house and grounds. For more information, visit mountvernon.org or call 703-780-2000.

The home and design coverage of Jura Koncius has taken her inside hundreds of homes, from tiny studios in Penn Quarter to country castles in Warrenton. Jura also hosts the Home Front live chat, Thursdays at 11 a.m. ET. Follow @jurakoncius

Graves of Our Founders: A Call to Action

Graves of Our Founders: A Call to Action Chase headstones. By Joe Farrell, Joe Farley…

Our Founding Fathers and the Second Amendment

Militias. Distrust of government. Abuse of power. The right to bear arms. Not a day passed without a passionate article or an editorial on the role of guns in American life. The year was 1775. More than 200 years later, the seminal debate undertaken as John Adams, Thomas Jefferson and James Madison formulated the laws of the land still echoes. Is the Michigan Militia an aberration or the Constitution in action? Is Gordon Liddy a dangerous demagogue or a devoted patriot? What exactly did the founding fathers mean when they penned the Second Amendment? No sampler can do justice to the debate, but the following excerpts shed light on the perceived relation between arms and liberty.
Upcoming Events
Feb
19
Sat
9:00 am 2022 Annual Meeting @ Harvard Club of Boston
2022 Annual Meeting @ Harvard Club of Boston
Feb 19 @ 9:00 am – 4:00 pm