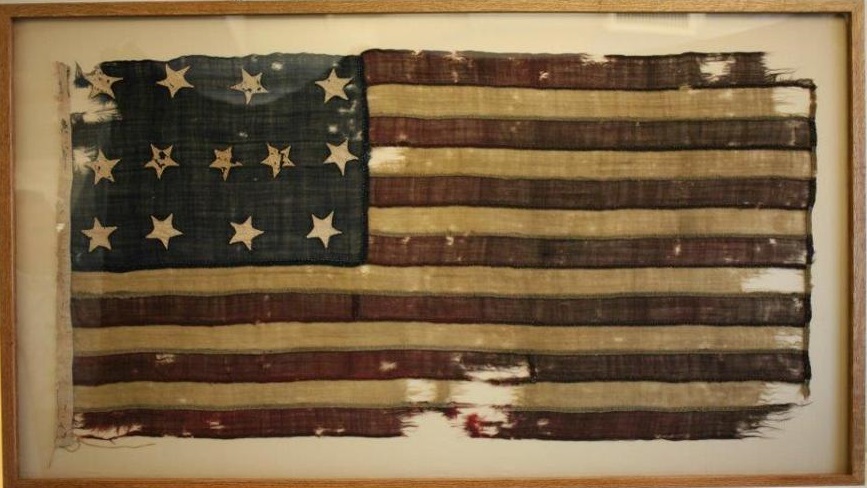 An important piece of Boston history has arrived for the celebration of national Flag Day this week.

Beginning Tuesday, the oldest 13-stars-and-stripes American flag that’s available for public view will be on display at the Commonwealth Museum on Morrissey Boulevard.

“[My family has] been wanting to bring it back to Boston, where it originated, for a long time,” said James Mooney, a Cincinnati resident whose family owns the flag and lent it to the museum.

Mooney, who was in Boston on Monday, said it’s believed that the flag was flown at what’s now known as Fort Independence, on Castle Island, around the time of the Revolutionary War. Mooney’s family acquired the flag in 1901, when one of his relatives purchased a fully-furnished home in Medford.

The home belonged to “a significant family with a history in the Revolutionary War, and going back to the Mayflower,” according to Mooney.

Since obtaining the flag more than 100 years ago, Mooney’s family has passed it down, and has put it on public display only a few times.

The worn flag is part of the Commonwealth Museum’s exhibit about Castle Island and its role in the American Revolution. Stephen Kenney, director at the museum, which is in the Massachusetts Archives Building, said the flag is identical in design to one that’s part of the State House art collection.

Material from the Associated Press was used in this report. Steve Annear can be reached at steve.annear@globe.com. Follow him on Twitter @steveannear.

Setting The Record Straight: The Worcester Revolt of September 6, 1774

As dawn broke on the morning of September 6, an advance party of militiamen seized the Worcester courthouse, barricaded themselves inside, and awaited the arrival of 25 Crown appointees. That morning, the well-organized, well-trained, and highly disciplined militia force of nearly 5,000 men poured into the Main Street area in front of the court building, assembling themselves into 37 town military companies. A large majority of the town militias had prudently voted the previous day to leave their firearms outside the town, so as not to provoke any unexpected violent incidents.5 The militia lined both sides of Main Street, forming a kind of gauntlet for the King's appointees to pass through. When the court officials arrived at the courthouse, they were denied entry and escorted to the nearby Daniel Heywood Tavern, where they were to await further instructions.

Faces of the American Revolution