More than 200 years after his death, the most notorious traitor of the Revolutionary War has an unlikely supporter

“You have five minutes,” the vicar said, as he led us through the foyer of St. Mary’s church in the Battersea section of London. “I’m sorry I can’t give you more time, but we have a meeting down there that’s about to start.”

I was on a London “Tory Tour” — an afternoon-long look at sites associated with the 7,000 American Loyalists who fled to England’s capital during the Revolution. Our tour guide, Tom Sebrell, a young historian from Virginia currently living and teaching in London, made the crypt of Benedict Arnold the first stop. Our group included a couple of American expats, an Oxford-educated Brit who confessed to knowing little about the Loyalists or Arnold; a young Chinese graduate student; and two American-born professors of journalism at Concordia University in Montreal, both in London for a conference.

“In Canada, the United Empire Loyalists, as they’re called there, are well respected,” says Brian Gabrial, one of the Concordia professors. “I’m interested to see how they’re remembered here.”

So was I. In particular, Arnold who, though not technically a Loyalist (he fought for five years on the side of the rebels), was certainly among the most prominent Americans in exile after the Revolution.

Instead of crypt-like shadows, we emerged into the glare of fluorescent lights. St. Mary’s Sunday school is held in the basement level; during the week, it’s rented by a private kindergarten. On this Saturday, a meeting was indeed underway. Folding chairs gathered in a circle, plastic foam cups and minutes in hand, a group of parishioners looked curiously at the group of eight who came traipsing past them, led by the apologetic vicar, the Rev. Paul Kennington. In a corner on the far side of the room, we found the ceiling festooned with colorful balloons. There were crayon drawings by the children; a fish tank—and Benedict Arnold.

While a church has been on this spot since the Middle Ages, the current St. Mary’s was only 18 years old when the general and his family arrived in London in 1795. Arnold—embroiled in controversy, as always, this time over bad investments in Canada—spent the last five years of his life here as a member of St. Mary’s. His remains, and those of his wife, the former Margaret Shippen, and their daughter lie here. The headstone, we notice as we cluster around it, looks surprisingly new and identifies Arnold as the “Sometime General in the Army of George Washington … The Two Nations Whom He Served In Turn in the Years of their Enmity Have United in Enduring Friendship.”

Very diplomatic; but who would have put up a new headstone of Arnold down here? “An American,” answered the vicar.

We looked at each other, dumbfounded. An American erecting a monument to one of the most infamous villains in our history?

Upon investigation, we learned that this benefactor, Bill Stanley of Norwich, Connecticut, was a former state senator, president of the Norwich Historical Society, and an oft-quoted, indefatigable defender of Norwich native Benedict Arnold (“If we can forgive the Japanese for Pearl Harbor, can’t we forgive him?” Stanley once said to a reporter).

“Bill felt that Arnold never got enough credit for what he did before he became a traitor,” says Olive Buddington, a close friend of Stanley’s and colleague in the historical society.

In articles and speeches over four decades, Stanley—who died in April, at age 79—cited as proof of Arnold’s greatness his epic march to Quebec in 1775; his brilliant naval engagement at Valcour Island on Lake Champlain in 1776 (an action that delayed a British invasion from the north that could have destroyed the rebellion); and ultimately, his heroic charge at Freeman’s Farm, during the decisive 1777 Battle of Saratoga. Of course, there was also that little matter in West Point in 1780, when Arnold’s plot to turn over the American fort to the British was uncovered. His contact, the gallant British officer John André, was caught and hanged as a spy; Arnold made a beeline for the Brits, and …well, you know the rest of that story: Benedict Arnold became Benedict Arnold—a synonym for treason to this day.

Stanley did not deny Arnold’s treachery. He just felt the man should have gotten more credit for what he did prior to switching sides. “He saved America, before he betrayed it,” he once said.

On a trip to London, Stanley and his wife, Peggy, visited St. Mary’s and found a faded painted epitaph on Arnold’s basement crypt. “He said that when he saw the seeming insignificance marking [Arnold’s] burial site, he almost cried,” recalls his son, Bill Stanley Jr. of New London, Connecticut. “He said, ‘This guy deserves better than this.’ But you can’t exactly call the American government and say ‘We need a better monument to Benedict Arnold!’ ” (Indeed, in the United States, there are some tributes to Arnold—including one at Saratoga National Historic Park and another at West Point—that note his “pre-treasonous” achievements, while pointedly omitting his name.) 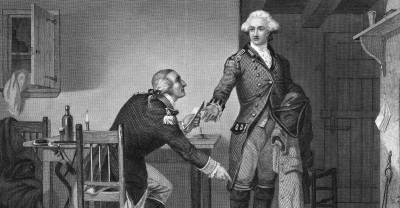 Benedict Arnold, shown on the left concealing his plans in John Andre’s boot, has become synonymous with treason but before he betrayed America, he saved it. (Bettmann / Corbis)

Stanley decided to undertake the project himself. Using his own money, he paid $15,000 to have a granite headstone cut and the epitaph inscribed. The church agreed to install it and in May, 2004, Stanley, his wife, son and daughter, and about 25 other friends and members of the Norwich Historical Society flew to London for the installation of the new headstone at St. Mary’s. At a special Sunday service — with the 160-pound headstone displayed on the altar—the “enduring friendship” between the United States and Great Britain was extolled, and Stanley, although weak from gallbladder surgery (one of a succession of maladies that would keep him in and out of hospital for the last six years of his life) felt vindicated. “He literally almost died doing this,” says Bill Jr. “But I think his feeling was that after he’d gotten the headstone over there that his mission was accomplished. Arnold to some degree had been exonerated, or at least recognized.”

Though impressed by the efforts of this determined man from Connecticut to honor his hero, Gabrial, the Concordia professor, for one, wasn’t buying the revisionist perspective on Arnold—nor was he moved to tears by the obscurity of his final resting place. “As an American, I’m quite pleased to see that, in death, Benedict Arnold is hardly a celebrated figure to most Brits,” he said.

And being buried in the basement, next to a fish tank?

Still, as we learned on the Tory Tour, the late Bill Stanley was not alone among his countrymen in his views on Arnold. A magnificent stained-glass tribute to Arnold at St. Mary’s was donated by American Vincent Lindner in 1976; and at the last stop of Sebrell’s tour, Arnold’s home in the fashionable Marylebone neighborhood, another surprise awaited us. On the door of the handsome three-story town house on Gloucester Place, a plaque—not, Sebrell noted, one of the official National Trust plaques usually accorded to historic homes in Britain—identifies Arnold as an “American Patriot.”

A patriot? Without even an acknowledgement of his treachery? “It might be someone’s idea of a joke … or irony,” Sebrell speculated. After all, even the tireless Bill Stanley didn’t try to defend the “second half” of Benedict Arnold’s career. “He knew it was a tough sell,” his son acknowledged. “It was like trying to get people to look at all the great things O.J. did before the Bronco.”

For more information on St. Mary’s of Battersea, and Arnold’s grave, visit here.

Committee of Correspondence: The Revolution in Provincial Politics

This revolutionary assumption of authority outside the bounds of the traditional structure began in Berkshire County, a region where previously there had been relatively little participation in the politics of opposition. In early July sixty "deputies of the several towns" met at Stockbridge "to consult and advise what was necessary and prudent to be done." 2 Their unanimous resolutions combining a declaration of rights with a nonconsumption covenant and a pledge to maintain constitutional local government, set a pattern which other counties subsequently followed. One month later Worcester, the second county to convene, expanded the role of the county convention even further. Together these first two conventions demonstrated the breadth and depth of the provincial desire to repel invasions against the constitutional rights of Massachusetts.