One of the most important events of the Revolutionary War

After the Battle of Saratoga, Gates was appointed Commander of the Southern Army, but was quickly defeated at the Battle of Camden in South Carolina by the British army under Lieutenant General Lord Charles Cornwallis.

To replace Gates, George Washington chose Nathanael Greene. When Greene arrived in Charlotte, NC, he found the remaining army in “wretched condition”, and realized he could not have a head-on battle with the British. He would split his army into two forces, use guerilla warfare tactics, attempt to draw the British away from their source of supplies, and wear them down.

In February 1781 a little known but pivotal event in the American Revolution occurred in Halifax County, Virginia at present-day South Boston. That event, The Crossing of the Dan, is now the subject of a 25-minute documentary, a gift to you from the Halifax County Historical Society with distribution made possible through a George Washington Endowment Grant received by the Dan River Chapter Virginia Society Sons of the American Revolution.

The documentary is for educational purposes only with the primary purpose being to promote extended knowledge and appreciation for America’s heritage. The film can be used as a program for school groups and classes, and historical and community organizations will especially benefit from its showing. Additional copies are available, and two companion volumes about The Crossing are also available from the Society.

For more information about the yearly celebration of the event, which has now been awarded national status by National Society of the American Revolution, access the Society’s website or contact the society at Post Office Box 601, South Boston, VA 24592. The annual Crossing of the Dan celebration is cosponsored by the Halifax County Historical Society, The Dan River Chapter SAR, The Berryman Green Chapter DAR, the Town of South Boston, and Halifax County Public Schools.

Half of Greene’s army under the command of Daniel Morgan fought Lieutenant Colonel Banastre Tarleton, Commandant of the British Legion (nicknamed "the Green Dragoon"), at Cowpens, SC. Morgan then began a strategic retreat into North Carolina. British losses were staggering, with 90 percent of their number either killed, wounded, or captured. Learning of this loss, Lord Cornwallis swore to regain his prisoners “no matter what the cost”.

Totally enraged by the loss at Cowpens, Cornwallis and Tarleton began to chase the American army and their hundreds of British prisoners. Greene and Morgan maneuvered north with the British army trailing close behind. Greene’s strategy was to avoid battle and draw the British further away from their supply lines. The Americans headed northeast into North Carolina. In an effort to move faster, Lord Cornwallis, obsessed with catching the Americans, burned most of his army’s supply wagons and destroyed all the soldier’s daily rations of brandy.

General Greene stopped at Guilford Court House (Greensboro), N.C., to ask his officers whether it was best to end the retreat and confront the British there or to race on to the Dan. It was decided to go into Virginia to get additional recruits and supplies. In anticipation of the Dan River crossing, military engineer Colonel Thaddeus Kosciuszko was sent ahead to build earthworks (defenses), and Lt. Colonel Edward Carrington was dispatched to gather boats.

Greene again split his army, sending 700 men away from his main army as a decoy towards the upper fords (shallow places in a body of water where one can cross by walking) of the Dan River upstream from Dix’s Ferry (Danville). Meanwhile, the slower moving main army, with artillery and supply wagons, took the shorter route and crossed the swollen river on February 14, 1781, with boats at Irvin’s Ferry (near Turbeville) and Boyd’s Ferry (South Boston). As the last Americans finished crossing the river, the first British troops arrived. Without boats they were unable to cross. Greene had won the race to the Dan River. 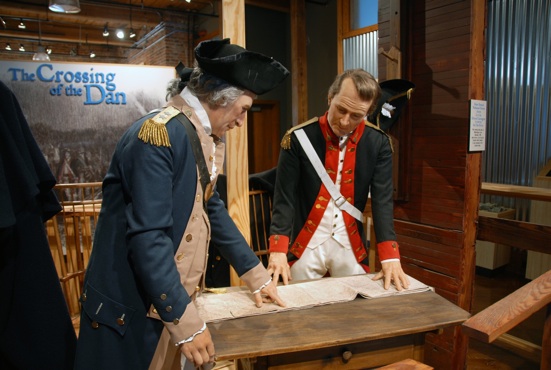 The Crossing of the Dan exhibit opens much like the beginning of the Southern Campaign of the American War for Independence. In the opening scene, General Nathanael Greene instructs his Quartermaster, Lt. Col. Edward Carrington, to explore the Dan and Yadkin Rivers to find an efficient route for transporting supplies to his army in North Carolina. Little did they know that this fateful decision would later save the American war efforts.

Greene’s American army enjoyed a weeklong rest north of the Dan River at the Old Halifax Court House (Crystal Hill) as the commander plotted his next strategy. His troops reinforced and his provisions refreshed, Greene considered an attack against the British. With Cornwallis removed from his supply lines, and his men exhausted from their fruitless pursuit, the advantage was Greene’s. The weary British forces moved south to camp at Hillsborough, NC, while the reenergized Americans, eager for a fight, prepared to slip back across the Dan River.

Though Lord Cornwallis held the field at Guilford Court House, it was at great cost. From that battlefield, the British army maneuvered to Wilmington, North Carolina, to await fresh troops and supplies before turning north again into Virginia. The Americans returned to the Carolina interior where they fought to capture the British posts that remained.

The British general’s stubborn fixation on the destruction of Major General Nathanael Greene’s Southern Field Army at any cost was a total failure. Lord Cornwallis and Banastre Tarleton were responsible for the loss of 1,513 of their troops in a three and a half month period – 48% of his army!

Lord Charles Cornwallis would come to the rash decision in Wilmington to abandon the Carolinas and move into Virginia, seeking the decisive victory that would never come.

An Alarm from Lexington

In the archives of the Historical Society of Pennsylvania is a manuscript letter four pages long. Bearing the names of thirty-nine signers in seventeen towns and cities between Boston and Philadelphia, it describes in brief and urgent detail the tragic events near Boston on April 19,1775, the battles of Lexington and Concord.

The story of the letter's five day journey as it was carried by post rider three hundred and fifty miles through Massachusetts, Connecticut, New York, and New Jersey to Philadelphia, and the excitement and reaction to its news, is unique in our nation's history. Although the letter originated in Watertown, Massachusetts, at the eastern end of the Boston-Worcester road, its story begins in Boston about six miles to the southeast.

A meeting of the Massachusetts Provincial Congress was scheduled for April 19th in Concord. Dr. Joseph Warren, in Boston, a zealous champion of American liberty, learned of a British march into the countryside in an effort to disrupt the meeting and to capture the leaders. Warren dispatched William Dawes and Paul Revere by separate routes to warn John Hancock and Samuel Adams in Lexington. While Dawes road toward Lexington, Revere implemented a prearranged plan to alert a series of alarm riders and had two signal lanterns placed in the North Church belfry before setting out for Lexington. Both men reached Lexington