The famous Washington Elm, standing in the middle of Garden Street at its junction with Mason Street, was the first of a line of six magnificent elms planted along Garden Street, the westerly border of the “Cow Commons,” about 1700. The second stood at the corner of the present Waterhouse Street, and was early noted as the “Whitefield Elm,” from the fact that the great revivalist preached some of his soul-shaking sermons beneath its shade in 1740. It obstructed the way and was cut down in 1871.1 The third stood at the corner of the present Concord Avenue, and the fourth opposite the present Walker Street. The fifth, just inside the fence between 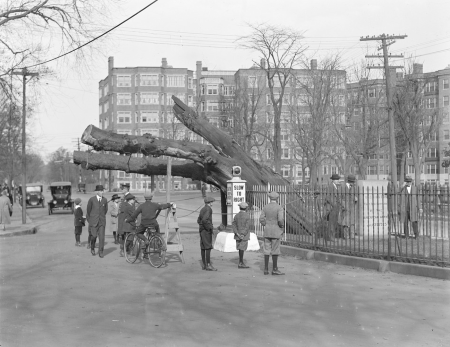 The Last of the Washington Elms. This photograph comes from the Leslie Jones Collection at the Boston Public Library, via Digital Commonwealth.*

the present Houghton and Parsons estates, was long known as the “Stone Elm,” from Gregory Stone, the early owner of the property; its maimed stump has survived all its fellows. The sixth stood opposite the present Linnaean Street, on which the line, turning at right angles, seems to have continued along the northern border of the “Commons,” as indicated by several other massive trunks.


For many years the Washington Elm had been slowly dying, deprived of almost all moisture by the water-tight paving of the street around it and by the lowering of the subterranean “water table” through the construction of sewers, etc., which also cut seriously into its roots. As early as 1874, S. A. Drake alludes to “its crippled branches swathed in bandages; its scars where, after holding aloft for a century their outstretched arms, limb after limb has fallen nerveless and decayed.”2 Like an ancient martyr, the more it suffered the more famous it became. Desperate if somewhat unintelligent efforts were made to preserve it by the city authorities. More and more dead branches were cut off, the wounds smeared with tar, the hollows filled with cement, the remaining limbs braced with iron bands and rods, until it became a truly pitiable object.

Finally, on October 26, 1923, the whole wretched ruin was accidently pulled over by workmen trying to remove another dead branch, and crashed against the iron railing surrounding it. Examination showed that the trunk was hopelessly rotted below the ground, a mere mass of punk: the wonder was that it had stood so long. Experts from the Bussey Institution counted two hundred and two annual rings in a section of its trunk; so that allowing for the last few years when growth had evidently ceased entirely it must have been at least two hundred and ten years old.

Finally, on October 26, 1923, the whole wretched ruin was accidentally pulled over by workmen trying to remove another dead branch, and crashed against the iron railing surrounding it. Examination showed that the trunk was hopelessly rotted below the ground, a mere mass of punk: the wonder was that it had stood so long.

The photographs must have been taken shortly afterward as people in Cambridge debated whether the patriotic symbol had been felled by Communists. (Seriously.)

Here are two more photographs from the series. The traffic island where the tree stood was removed, a metal plate left in the road to mark the exact spot.

The remains of the famous relic were rescued with some difficulty from a horde of souvenir hunters and taken in charge by the city government. It was determined to make of them “an object lesson in patriotism for the whole country.” To this end they were sawn into numerous fragments. A large piece of the main trunk was sent to the governor of each of the forty-eight states, and the section from which the rings were counted was polished and presented to the museum at Mt. Vernon. From the smaller branches were made a quantity of gavels, two of which were presented to the legislative bodies of each state and many to fraternal organizations, etc. One hundred and fifty small blocks of the wood were given to local applicants, thirty-two to various counties, and two hundred and fifty were sent out over the country. In all about one thousand pieces were distributed, each suitably labeled with a metal plaque.

The granite tablet that had stood at the foot of the elm bore the inscription — said to be from the pen of Henry W. Longfellow:

UNDER THIS TREE
WASHINGTON
FIRST TOOK COMMAND
OF THE
AMERICAN ARMY
JULY 3D, 1775