Not only is West Main Street becoming Museum Row. It also is becoming Interactive Experience/Learning Center Row. (All right, not as catchy!)

One of the newest tenants of the cast iron buildings on the picturesque street, between Eighth and Ninth, is the national headquarters of the National Society, Sons of the American Revolution.

The SAR, made up of Americans who can trace their lineage to the founding families, recently sold its old headquarters building on South Fourth Street and West Kentucky to Simmons College and moved into 809 W. Main, where it has completed its Genealogical Library. If you think you might be descended from George Washington or John Hancock, this is the place to find out.

In the works, right next door, is the National Society of the Sons of the Revolution Center for Advancing America’s Heritage. It will be a museum full of exploring, learning about and experiencing the revolutionary fervor of the late 18th century, when a break from Mother England seemed desirable – but then what?

The good news is that the center is being planned and developed by Solid Light, the same Louisville firm that produced the Evan Williams Experience for Heaven Hill Distilleries. And that means out-of-the-box thinking, fabricating and use of modern technology.

All we have right now are renderings. But Solid Light president Cynthia Torp guided me to a page of the Society’s web site, so we can see the plan in action.

Solid Light has been a pioneer in adding the fourth dimension to the museum experience. It’s a sight-sound-and-feel presentation in which you don’t just look at old pictures and archival documents, you live inside the reproduction of a historical time (such as the Louisville waterfront, 225 years ago, at the Evan Williams Experience).

Here, does that mean recreating colonial Boston or Philadelphia? 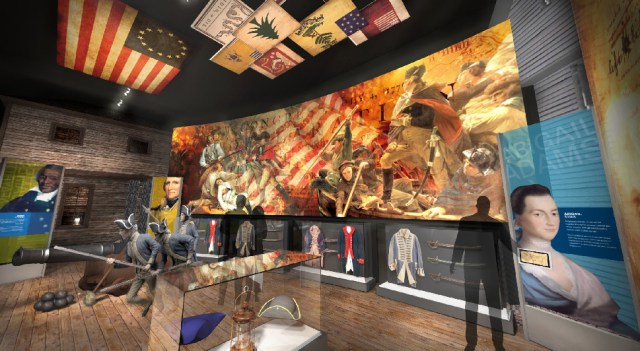 “Parts of it,” says Torp, but she cautions that they’re only at the beginning of the planning stage. The Society has raised about $10 million for this capital campaign, but still has several million dollars to go before the project can be completed and installed. The total budget is about $20 million.

But the objective will be similar to all the other experiences Solid Light creates, to get people to slow down and get involved as they get educated. “There are three types of attendees,” Torp says, “strollers, streakers and studiers. Studiers stop and read every word in the place. But the growing majority are streakers, who buzz right through, not patient, demanding information quickly or you’ll lose them. If you want to get your point across, it had better be big and bold.”

How people learn is a constantly moving target, she says. The current generation wants fun, entertainment, engagement, storytelling. “People learn better when they’re actively engaged,” she says. “They want to learn more only about things they’re interested in, and by touching and feeling.”

The site of the museum, the old Fulton Conway Building, has historical resonance. The 800 block of West Main Street was where the old Fort Nelson stood, a strategic Colonial defense installation on the Ohio River during the Revolutionary War. And Torp says the museum will certainly explore the times, issues and events that surrounded the War for Independence. But the SAR wants it to be much more than that.

“We thought we’d be doing a museum on the Revolutionary War,” she says. “Actually, it’s a museum on the ideals of the revolution and how those ideals are still relevant today.”

The aim is to educate today’s Americans, she says, particularly the younger generation, about why it’s important to carry on the principles of the founders – independence, freedom, self-determination, constitutional law, democracy.

But, as with so much of the work Solid Light is doing, it will be thrillingly immersive and interactive, with opportunities to overhear “actual” conversations – such as, Torp says, discussions and often arguments between Thomas Jefferson, John Adams and Benjamin Franklin as they edited and finalized the document that became the Declaration of Independence. 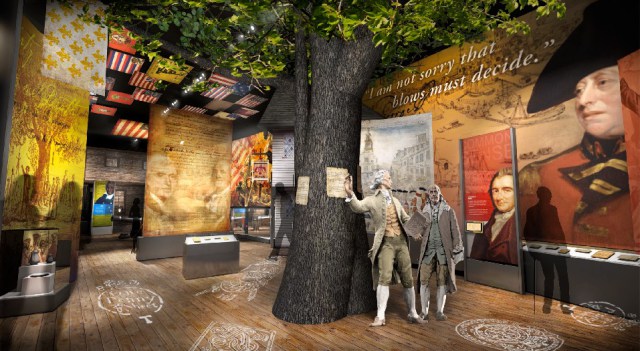 A rendering of inside

The museum will contain everything from recreations of sites and scenes to historical documents to huge video walls to call-outs of people who might now be regarded as “secondary” to the founders and signers, like Abigail Adams, John Adams’ wife and conscience, representative of the women of the revolution; and perhaps also Henry Bibb, a Kentucky-born slave who escaped to Canada and wrote “Narrative of the Life and Adventures of Henry Bibb, An American Slave, Written by Himself,” one of the first slave narratives that became a rallying document of the abolitionist movement.

“Not the big names, but people who contributed in a smaller way that might not be well-known today,” says Torp. “We haven’t gotten to the point of selecting who all those people might be.”

In fact, she reminds us, the most aggressive schedule won’t have the museum completed for another three or four years.

The architect of the building is Dan Preston, vice president of design at Architection. The builder is A.L. Post Inc., which created the columned façade on Main Street.

The gravesites of Revolutionary War veterans in the Sears Cemetery in Brewster. The gravesite of…