Warm weather drew a much larger crowd than usual to take part in the annual Wreaths Across America event Saturday at Arlington National Cemetery, where more than 241,000 wreaths were placed at the graves of the fallen. Even with high threat level, wreath-laying events still a go

When Wreaths Across America founder Morrill Worcester turned on the radio Friday morning, he heard news that the U.S. terrorist threat levels were the highest they’ve been since 9/11. “How ironic,” he said after arriving at the Pentagon to lay 184 wreaths in honor of those who died at the Arlington site 14 years ago. Community joins in wreath-laying ceremony

Kansas City has lost a patriot.

Fred Kaffenberger Jr., 80, a member of the Sons of the American Revolution, while wearing the colonial attire and tri-corner hat of society members, died last week in Leavenworth National Cemetery while laying Christmas wreaths at the graves of veterans.

The details of Kaffenberger’s death, which have since gone viral, strike friends and family members as fitting.

“He went exactly the way he would have chosen to go,” said daughter Amber DiGiovanni.

The Sons of the American Revolution is a “lineage” society whose members have traced their family trees back to an ancestor who “supported the cause of American independence” during the Revolutionary War. 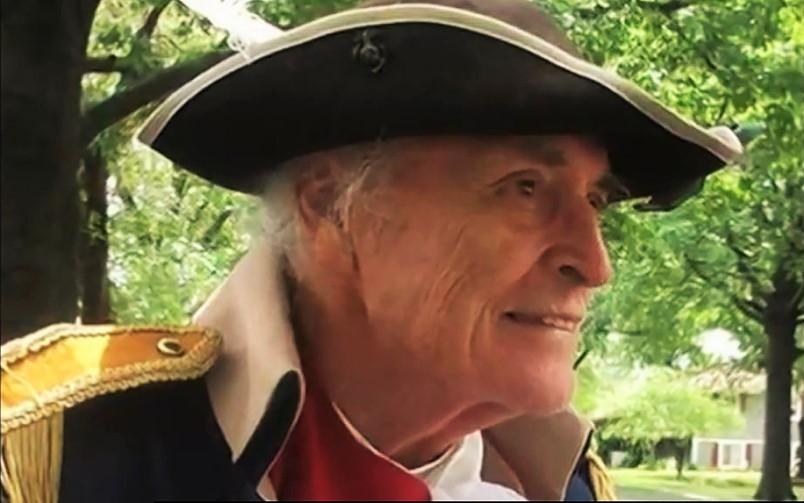 As a member, Kaffenberger personified patriotism for the benefit of any group that asked him to appear. He participated in full uniform in parades and naturalization ceremonies and often gave programs on American flag history.

“When he walked into a room wearing that uniform, he looked like George Washington,” DiGiovanni said.

He had always been patriotic. As a fourth-grader in Lebanon, Mo., Kaffenberger won an American Legion poetry contest for a poem written for Poppy Day, an annual remembrance of veterans.

“There goes a soldier walking down the street, but there are many many soldiers without any feet, so buy a poppy on Poppy Day and help a soldier on his way,” the poem read in part.

“That is indicative of an old soul at a very young age,” DiGiovanni said.

He went on to a life of serving others. Despite later developing vision problems, Kaffenberger, a U.S. Marine Corps veteran, subscribed to at least eight magazines just so he could donate them to veterans programs.

“He didn’t have time to read them anyway,” said Wanda Kaffenberger, his widow.

He was busy, she said, donating blood or washing dishes during Lent at the Knights of Columbus fish fries. Neighbors knew him for his almost daily walk from the family’s Waldo home to early Mass at St. Elizabeth Catholic Church.

As a Kansas City Public Schools history and civics teacher for 33 years, Kaffenberger exhibited fierce devotion to his work, sometimes to the dismay of family members.

“Every time I would have a child on a school day, which seemed to happen a lot with me, he would only be at the hospital for a little while,” said Wanda Kaffenberger. “And then he would say, ‘I’m going back to school; if I can find a reason to skip class, my students will find a reason to skip,’ and out he would go.

“I would be mad, but if he wasn’t doing anything at the hospital he was not going to stay. He was so wonderfully unusual.”

So it seemed fitting, family members said, that Kaffenberger died Dec. 12 while distributing Christmas wreaths for Wreaths Across America, a holiday program honoring veterans, at the national cemetery in Leavenworth.

Each volunteer received one wreath he could lay on the grave of his choosing.

When the wreath placing was almost complete, Kaffenberger took two wreaths, one for the grave of a nonrelated veteran and the other for the grave of John DiGiovanni, his daughter Amber’s late husband. His ashes had been interred there for four years.

“When he didn’t come back, the other gentlemen went looking for him,” his daughter said.

“One of the those who found Pop later picked up the fallen wreath and placed it on John’s grave for him.”

The way her father died while in service to others has been inspirational, said daughter Shannon Kaffenberger.

“He somehow found a way to raise us up, to elevate us, even in his passing,” she said.

“It was a blessing,” Wanda Kaffenberger said.

“Jesus said, ‘Fred, supper’s ready.’ Had he not died so beautifully it would be hard, but every step he ever had taken had been toward the kingdom of God. He had loved his neighbor as himself.”

There even was some room for levity at the hospital where doctors declared him dead, she added.

“His son Fred said, ‘It’s just like Dad to drop dead in the middle of the cemetery and cut out the middleman.’ We laughed and cried, and we all were of one spirit.

“When we left that hospital room, it was like water pouring out of a cup.”

Compatriot Frank Buckles, the last living American World War I veteran and the subject of…