A man in Dennis Massachusetts inherited a 1775 Almanac from his grandfather. Judging from notes in the margins, this document is far more than a dusty reference manual. Someone has used it as a diary. The scrawled notes give History Detectives a rare, intimate insight into how conflicting loyalties may have strained personal relationships during the Revolution. Who wrote this diary? And what role did the author play in the Revolutionary War?

This case opens an aging bundle of papers and turns the pages to the chaotic and controversial first days of the American Revolution. 1775. The American colonies are engaged in a David and Goliath struggle with the world’s most powerful military force. The oppression of British rule had boiled over two years earlier in the Boston Tea Party and the state of Massachusetts is now at the heart of the violent struggle to give birth to a new nation. But not everybody supports the patriots. A powerful minority backs King George, and is fighting to keep America a colony. Shep Williams from Dennis, Massachusetts 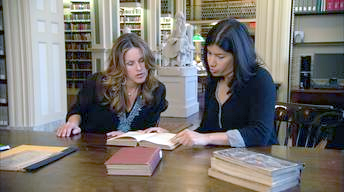 has an almanac with scribblings that might be a window into the first fumbling days of the United States.

The scrawled notes in the margins of this 1775 Almanac give History Detectives host Elyse Luray rare, intimate insight into how conflicting loyalties may have strained personal relationships during the Revolution. Elyse sets out to learn who wrote this diary. What role did the author play in the Revolutionary War?

A full transcript of the segment is available here.

The subject of slavery bad for a long term of years caused much uneasiness among the people. The hearts and minds of patriots and philanthropists had been quickened to a sense of the atrocious wickedness of man holding property in man, and the public conscience was gradually becoming susceptible to appeals for its abolition.

The traffic was never sanctioned in this Province, and under the Colonial and Provincial Charters the slave trade was deprecated as a disgrace to humanity. The holding of slaves was not general, being confined to the wealthier classes.