Historic bars, pubs, and taverns allow you to follow in the footsteps of the Founding Fathers – and enjoy some refreshment at the same time.

Do you want to see where American Revolution and the fervor behind the revolt against British rule was fueled1? Feed your taste buds, enjoy a few pints, and be regaled by the stories surrounding the brave people who dared to challenge the British crown. Visit legendary watering holes where founding fathers such as Paul Revere and John Hancock were inspired to brew the treasonous ideas that led to the creation of the world’s greatest democracy. Brag to your friends and colleagues at home that you saw with your own eyes where the Sons of Liberty planned the American Revolution. You might even sit in the very same spot where George Washington raised a glass.

GREEN DRAGON, Boston The Green Dragon, founded in 1654, is the oldest bar of the Revolutionary period. The Freemasons took the first floor for their meeting rooms. The basement tavern was used by several secret groups and became known by historians as the “Headquarters of the Revolution”. The Sons of Liberty, Boston Committee of Correspondence and the Boston Caucus each met there. In fact, the Sons of Liberty met here so often that the Green Dragon came to be called the “Headquarters of the American Revolution.” The Boston Tea Party was planned within it. 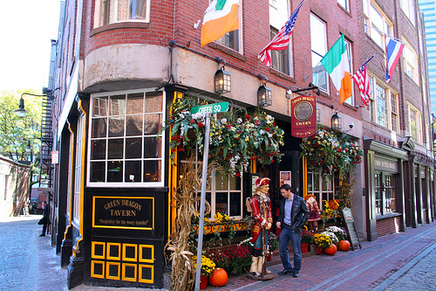 When citizens began to worry that the Redcoats were going to march to Concord to look for munitions, this is where they met to organize an eavesdropping operation so that they could overhear British plans. (Paul Revere began his famous ride here.) Later, in 1788, the Patriots met in this pub to draw up a resolution to support the Federal Constitution. When you stop by this historic Boston bar for a brew, you are following the footsteps of American history. 11 Marshall St, (617) 367-0055

WARREN TAVERN, Charlestown Warren Tavern is the oldest tavern in Massachusetts and the most famous watering hole in the United States still in its original building and location. First erected in 1780, the Warren Tavern was the first building to be rebuilt in Charlestown after the British burned the whole area during the Battle of Bunker Hill in June of 1775. 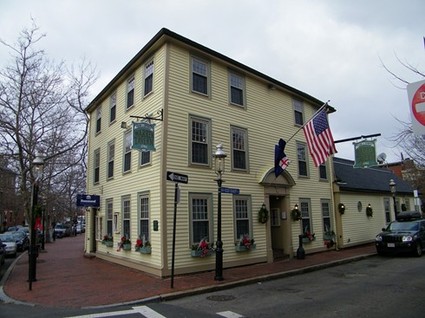 Warren Tavern is one of the most historic Boston bars, even down to the low beams in the ceilings, which the builders salvaged from old boats at nearby Charlestown Navy Yard – making the beams even older than the rest of the Tavern. Inside, the large fireplace steps you back into time.

The Tavern was built by Captain Eliphelet Newell, who fought at Bunker Hill and had been a close friend of Sons of Liberty leader and fervent Patriot, Captain Newell named his tavern after his friend Dr. Joseph Warren, who was killed on the hill by the British. Paul Revere, who frequently who frequently met there with other patriots, remarked that it was one of his favorite watering holes. General George Washington stopped by for “refreshments” while visiting a friend in Charlestown. 2 Pleasant St, (617) 241-8142, www.warrentavern.com 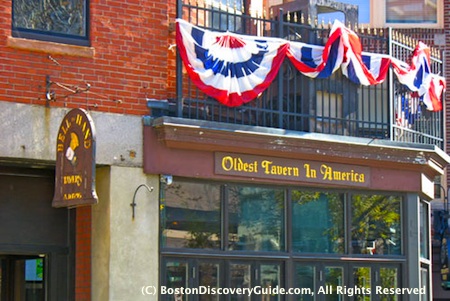 Bell in Hand, built in 1795, is America’s oldest continuously operating tavern. A gathering place for printers and politicians, sailors and students, it quickly became the most famous alehouse in the city. (There aren’t many historical sites where you can have a great meal and a cold beer.)

What was it about the Bell that made it so popular? — Jimmy Wilson. Jimmy, the first owner, was Boston’s town crier for fifty years. Good news or bad, Bostonians heard it from him. He reported on everything from the Boston Tea Party to the birth of the nation. When he retired, he decided to open a tavern. He was proud of his former occupation so he called the place Bell-in-Hand to reflect the bell he carried on the job.

Not one for “hard stuff”, Jimmy refused to sell the whiskey, rum, and gin so popular in other taverns of the day. No, only ale would be served — but what ale! It was so thick that it was served in two mugs, one for the ale and the second for the froth. It is quite possible that the ale became better known than Jimmy.

Bell in Hand has occupied its current building since 1844. Its first spot was where Boston City Hall is located today. (You can see one of the original signs with a hand holding a bell in Boston’s Old City Hall, near the Benjamin Franklin Statue on the Freedom Trail.) If you want a sense of being one of the most historic Boston bars, go early in the day. 45 Union St,(617) 227-2098, www.viewmenu.com 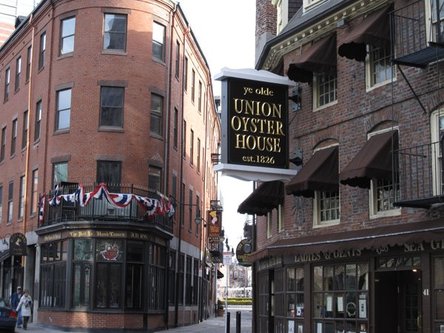 Inside, old paintings of famous patrons line the wood-paneled areas. For example, there is a painting of Daniel Webster, who stopped by the oyster bar almost daily to consume six plates of six oysters accompanied by a tall glass of brandy and water (that is, six glasses of brandy and 36 oysters daily).

The first stirrings of the American Revolution reached the upper floor of the building in 1771, when printer Isaiah Thomas published his newspaper “The Massachusetts Spy,” long known as the oldest newspaper in the United States. The Kennedys patronized the Union Oyster House for years. J.F.K. loved to feast in privacy in the upstairs dining room. His favorite booth, “The Kennedy Booth”, has since been dedicated in his memory. 41 Union St, (617) 227-2750, www.unionoysterhouse.com

WAYSIDE INN, Sudbury Revere may have been a regular at the Warren Tavern, but the Wayside Inn is where his legend was truly born2. This public house inspired poet Henry Wadsworth Longfellow to pen his 1863 “Tales of a Wayside Inn,” which included his famous ode “Paul Revere’s Ride.” Serving travelers on the Boston Post Road since 1716, the inn is a true throwback, particularly the Old Bar Room, one of two original rooms. Pewter tankards hang from the rafters, candles sit atop bare wooden tables, and a blaze crackles in the fireplace. Get in the Revolutionary spirit by sipping on a coow woow, an early American cocktail of two parts rum and one part ginger brandy, while reading a copy of Longfellow’s iconic stanzas. Display cases include the personal effects of innkeeper Colonel Ezekiel Howe, including the sword he carried as he led Sudbury farmers on the 12-mile trek to Concord on the morning of April 19, 1775, when the first shots of the Revolution were fired. 72 Wayside Inn Road, 978-443-1776, www.wayside.org

COLONIAL INN, Concord While Howe played a part in the opening act of the Revolution, so did the Colonial Inn. The tavern inside the main inn, which dates from 1716, was used as a storehouse for arms and provisions on the morning of the battle at the Old North Bridge. Today, the Village Forge Tavern is not quite as seditious. The historic pub features live music, trivia nights, and a popular Sunday brunch. During warmer months, diners can sit on the inn’s porch fronting historic Monument Square. 48 Monument Square, 978-369-9200, www.concordscolonialinn.com

BARKER TAVERN, Scituate Just steps from Scituate Harbor, the Barker Tavern offers a rare combination of Colonial charm and waterfront location. It incorporates part of an original 1634 dwelling, said to be one of the oldest standing houses in the United States. In the 17th century, the house was used as a garrison for defense during King Philip’s War. Today, it’s a fine dining destination on the South Shore with a traditional New England dining room and the more casual Eli’s Pub, a private nook tucked into the restaurant. 21 Barker Road, 781-545-6533, www.barkertavern.com

SCARLET OAK TAVERN, Hingham The tavern dates only to 2007, but it’s housed in a thoroughly restored 250-year-old Colonial house on what Eleanor Roosevelt called “the prettiest Main Street in America. A $1 million renovation reinvigorated the house, which features a comfortable dining room and a large, dark-wood bar. Scarlet Oak Tavern’s seasonal menus feature local ingredients, including produce sourced from its own farm in Groton. 1217 Main St., 781-749-8200, www.scarletoaktavern.com

OLD YARMOUTH INN, Yarmouthport Cape Cod’s oldest inn, halfway between Plymouth and Provincetown, first opened its doors to wayfarers in 1696. The wood-paneled tavern – featuring a polished bar, bay windows, and a small fireplace – is a cozy spot for a casual meal. The elegant Red Room, which dates to 1696, is a great backdrop for an intimate dinner. Keep your eyes peeled for the inn’s resident ghosts. 223 Route 6A, 508-362-9962, www.oldyarmouthinn.com

SALEM CROSS INN, West Brookfield Colonial cuisine doesn’t get much more authentic than at the Salem Cross Inn, 20 miles west of Worcester. The restored 1705 farmhouse has been a family-run restaurant since 1961. Waitstaff wear Colonial dress, and chefs bake in a restored 1699 brick oven and prepare beef, game, and fowl on the country’s only known operating roasting jack – an 18th-century device that uses an intricate system of weights, cogs, and pulleys to turn a spit in huge hearths. The inn hosts special 18th-century-style feasts that include pie making, mulling, and chowder demonstrations along with horse-drawn wagon or sleigh rides through the 600-acre property. 260 West Main St., 508-867-2345, www.salemcrossinn.com

PUBLICK HOUSE, Sturbridge When Colonel Ebenezer Crafts opened the Publick House in 1771, the inn adjacent to picturesque Sturbridge Common quickly became a popular stopover for horsemen riding the roads from Boston to New York and Providence to Springfield. These days, the Publick House draws motorists from Interstate 84 and the Mass Pike. The rambling inn serves up Yankee fare, including its signature “every day is Thanksgiving” turkey dinner, in the historic Tap Room and Ebenezer’s Tavern, which feature period antiques, original woodwork, and cozy fireplaces. 277 Main St., 508-347-3313, www.publickhouse.com

RED LION INN, Stockbridge The small general store opened by Silas and Anna Bingham in 1773 quickly expanded into the Red Lion Inn, a popular stagecoach stop between Boston and Albany and headquarters for the 1786 Shays Rebellion. The sprawling inn’s Widow Bingham’s Tavern – with its low ceilings, massive posts, and warming fireplace – is a throwback to its early days as an eight-room public house. It offers a more casual and family-friendly option than the inn’s formal, elegant dining room. Wicker baskets hanging from the rafters, historical lithographs, dark-wood paneling, and checked tablecloths lend a rustic vibe. 30 Main St., 413-298-5545, www.redlioninn.com