The 124th Congress, hosted by the South Carolina Society July 18-24, drew 555 compatriots and guests to Greenville, making it one of the largest on record. Greenville, in the southern foothills of the Smoky Mountains, is best known as the North American headquarters of BMW and for having an amazing downtown park system. The park is built around the rolling falls of the Reedy River, with the curved, cantilevered, one-of-a-kind Liberty Bridge that rises above the falls.

Saturday’s schedule included an all-day trip to two upstate Revolutionary battlefields—Kings Mountain and Cowpens. The welcome reception was hosted by the South Carolina Society at the downtown Hyatt Regency hotel. It featured speed painter Charlie Pate who in the event’s 90 minutes, created a large painting of Gen. George Washington on horseback with his sword drawn. The painting was displayed at the front of the Regency Ballroom, which was used for most meetings and banquets throughout the Congress. 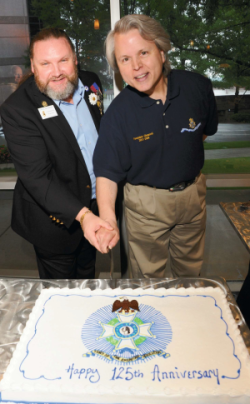 In the first Trustees meeting on Sunday, a new investment policy statement was approved, as was a request to enhance the façade of the new headquarters building in Louisville with the installation of the Minuteman Statue and a series of flags. There was a discussion about the SAR Library’s large collection of microfilm and the topic will continue to be reviewed by the Library Committee.

Highlights of the opening business session included the presentation of gifts, along with the WOSAR announcing it had reached its $100,000 goal. Among those extending greetings were representatives of the governor, a U.S. senator, the mayor and groups such as the DAR, C.A.R. and Sons of Confederate Veterans. Also highlighting the morning sessions was the membership induction of John Slaughter, the superintendent of the Cowpens National Battlefield and Ninety Six National Historic Site, which are both located in South Carolina. 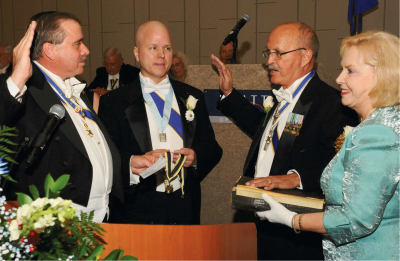 Secretary General Lindsey Cook Brock placed his hand on a family Bible held by First Lady Billie Sheckler Brock as he was sworn in as President General during Wednesday night’s closing banquet.
During President General Joseph W. Dooley’s report, he noted that in response to his directives issued during the Kansas City Congress, more than 40 portraits of George Washington have been presented to schools, more than 45 grave markers have been erected, and more than 8,000 copies of the U.S. Constitution have been distributed. (For a complete report on the PG’s initiatives, see page 20.) 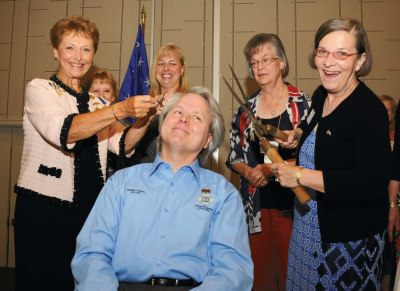 True to his word, since the SAR Foundation was able to raise more than $1 million during his term toward the SAR Center for Advancing America’s Heritage, President General Joseph W. Dooley took to the Congress foor and allowed Vice President General William Anthony “Tony” Robinson, a barber in Circleville, Ohio, to shear his locks and shave his head. Above, several ladies, including a DAR President General and his own niece, took snips of PG Dooley’s hair before Robinson began his work. At right, Robinson paid attention to detail. Below, the President General got his frst glance at the fnished product in front of a roaring Congress audience.
Following the posting of colors by the combined SAR Color Guard and an invocation by Chaplain General Rt. Rev. Louis V. Carlson Jr., Secretary General Lindsey C. Brock presented the Pledge of Allegiance and the Pledge to the SAR. The eight Presidents General in attendance presented comments, led by Carl F. Hoffman (1997-98). Other PGs attending were Roland G. Downing (2005-06), Nathan E. White (2006-07), Bruce W. Wilcox (2007-08), Edward F. Butler Sr. (2009-10), J. David Sympson (2010-11), Larry J. Magerkurth (2011-12) and Stephen A. Leishman (2012-13).

During the business session, the Congress approved the development of a vision plan for the new SAR Museum and SAR Center for Advancing America’s Heritage by the Louisville firm, Solid Light. The estimated cost is $550,000. The motion passed without objection.

Compatriot Lanny R. Patten and SAR Foundation President Samuel C. Powell announced that the current capital campaign will end on Dec. 31, 2014, and the 1776 Society will be launched on Jan. 1, which offers donors the opportunity to buy 3 square feet of the new center/museum for $1,776. Powell’s wife, Karen, purchased 9 square feet, and Powell kicked off the campaign with the purchase of 30 square feet ($17,760).

The Congress approved a resolution seeking honorary citizenship for General Bernardo de Galvez of Spain for his support of the American Revolution, following up on letters of support sent by PG Dooley. After numerous committee reports and other items, a proclamation was approved to honor the 50th Anniversary of the Vietnam War, beginning Nov. 11, 2014, and continuing through 2025.

After much discussion, a motion to raise the supplemental application fee to $80 was amended to $60 and approved. There was also a demonstration of the new online application system that is being worked on by Texas Compatriot Bill Marrs.

In addition to the early Congress battlefield tours, Wednesday included a bus trip to the Ninety-Six Historic Site and Thursday featured a day-long trip to the Biltmore Estate in Asheville, N.C.

The National Archives will host a live, three-day, virtual Genealogy Fair via webcast on YouTube. The free program offers family history research tools for all skill levels on Federal records including census, American Indian, military, naturalization, and immigration. Other topics include overviews of online genealogy resources and guidance on preserving personal records. For complete schedule and participation instructions, visit the Virtual Genealogy Fair website. Speakers include experts from National Archives’ facilities nationwide, as well as U.S. Citizen and Immigration Services