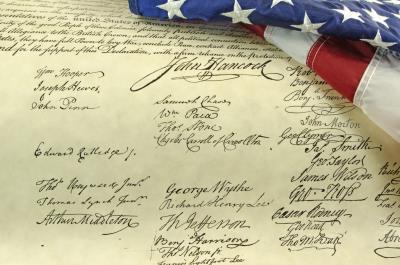 Throughout history, certain documents have been issued to claim or establish rights and to check abuses of power. To many, the document known as Magna Carta, or the Great Charter, written in thirteenth-century England, is one of the most potent symbols of political liberty and justice. In particular, the political leaders of the British colonies in America looked to Magna Carta as a precedent for the development of charters and laws in their new territories. Written in Latin listing terms agreed to by England’s King John and sealed on the fields at Runnymede in June 1215, Magna Carta established the principle that no individual is above the law of the land. The drafters of both the Declaration of Independence and the Constitution looked to the concepts contained in Magna Carta for inspiration as they crafted the foundational documents of American democracy.

This exhibition brings together six important documents significant to American history, spanning more than eight centuries: Magna Carta, the Declaration of Independence, an early draft of the Constitution, the Emancipation Proclamation, the Declaration of Rights of the Women of the United States, and the Universal Declaration of Human Rights.

Magna Carta comes to the Clark courtesy of the Dean and Chapter of Lincoln Cathedral as part of the United Kingdom’s preparations for celebrating the document’s 800th anniversary in 2015. The Lincoln Cathedral Exemplar of Magna Carta is widely regarded as the finest existing copy of the document due to the fact that it is written in an ‘official’ hand and has remained at Lincoln since the time of its first issue.

Radical Words: From Magna Carta to the Constitution has been organized by the Clark Art Institute, in partnership with Lincoln Cathedral—Bringing Magna Carta to the USA. It is generously supported by the Commonwealth of Massachusetts, the officers and employees of Allen & Company, Inc., the Gilder Foundation, and an indemnity from the Federal Council on the Arts and the Humanities.