The range of types of family records shows the diversity of visual traditions in the young United States. The first image below is hand-illustrated and lettered in German. It’s part of the tradition of fraktur, a Pennsylvania German folk art in which illustrators produced customized documents to mark important points in people’s lives.

Other illustrated records below, in English, may not be fraktur proper but are likewise hand-drawn and personalized. Still other records in the group are mass-produced lithographs, filled in by hand. 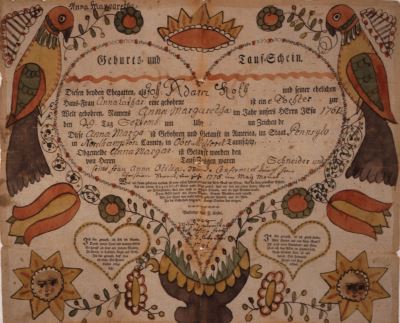 These are obviously precious records, with a heavy freight of family history. The fact that relatives would send them in to the government shows both their value as proof of relationship, and the families’ need for compensation.

All of the families who parted with the records below were awarded their pensions.

Rebecca Onion, who runs Slate’s history blog The Vault, is a writer and academic living in Ohio. Follow her on Twitter.