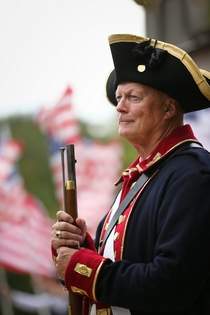 Lt. Col. John A. Cunningham, of the Col. Henry Knox Color Guard of Massachusetts, greets guests during the 8th Annual 9/11 Thanks to Yanks tribute dinner honoring veterans and active duty military at the Double Tree Hotel in Milford on Thursday. (Daily News and Wicked Local Photo/Dan Holmes>)
MILFORD – A jazz band played as veterans and their families dignitaries, and representatives of veteran relief organizations took their seats at the Thanks For Yanks tribute dinner Thursday night at the Double Tree hotel.

The Thanks To Yanks dinner started in 2006 at the Myriad Ballroom in Mendon with an attendance of 150 people. Due to growing support, the event has expanded and relocated to Milford with attendance up to roughly 350 people.

The dinner is free and relies on donations from community members, Shain said.

“It’s really just a grassroots effort,” he said. “The people of Milford have been very generous.”

Representatives from the Order of the Purple Heart were present for the first time. They had just caught wind of the dinner this year, and donated money based on its reputation, Department of Massachusetts Commander Leo David Agnew said.

“An event like this says a lot about the town,” he said.

As they have been since the beginning, the American Gold Star Mothers, an organization dedicated to the mothers of those lost in the service, were in attendance.

“I think it’s healing for veterans and their families,” said Treasurer Dolly Sullivan. “It shows what they have sacrificed is appreciated.”

Sullivan lost her son Christopher in the Iraq War in 2007. He was a captain in the Army and worked to set up polling booths for the Free Vote in Iraq.

Among the veterans present was Salvato Gulino, a 93-year-old veteran of World War II. He served as an Army engineer. He stormed Normandy with the Allied forces and spent the next 36 months in combat.

“I think sometimes, seeing the things I saw, that maybe it would have been easier had I just died,” he said. “But I can remember being there and looking up at the sun and thinking there’s someone up there and he knows it’s not my turn yet.”

Though he is a lifelong Milford resident, Thursday was his first time attending the event, and it made him feel proud that he had served his country, he said.