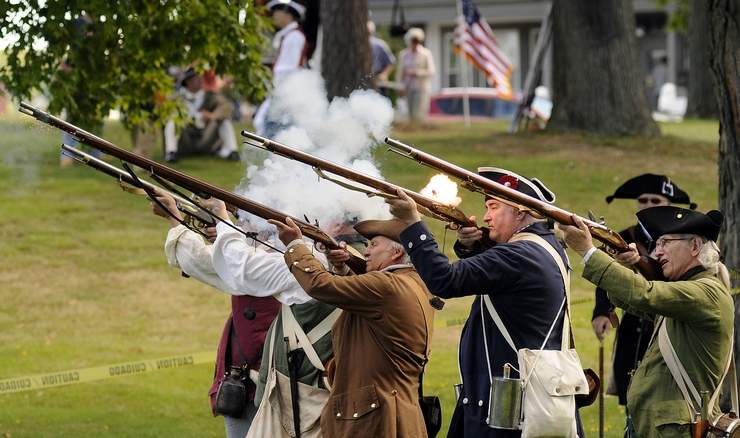 Members of the Sturbridge Colonial Minute Co. fire their muskets during the Worcester Revolution of 1774 event in Institute Park on Sunday.
(T&G Staff/Rick Cinclair)
WORCESTER — Perhaps the “shot heard round the world” could have been here, if only there had been a shot.

Worcester had everything else.

On Sept. 6, 1774, more than 4,600 militia from Worcester and three dozen surrounding towns descended on the county courthouse, forcing the magistrates appointed by the British administration to resign, and effectively declaring Worcester County to be beyond the reach of Parliament in London.

Sunday, re-enactors and visitors from across the county gathered on North Main Street to take part in an imitation of what they believe to be the long-forgotten start of American independence.

“We threw the British crown off our shoulders a full six months before Lexington and Concord, and we didn’t shed any blood,” said local historian John C. Schumacher-Hardy. “It’s well worth remembering.”

A panel discussion at the Worcester Area Mission Society speculated that the fact that the militia shut down the courthouse without resorting to arms, and without any killing, may be what consigned the “Worcester Revolution” to obscurity and leads most Americans to date the start of independence half a year later.

Additionally, the story of the battles of April 19, 1775, became the backdrop of several poetic and literary works of the 19th century, such as Concord resident Ralph Waldo Emerson’s “Concord Hymn,” which coined the term “shot heard round the world.”

The “Worcester Revolution” had faded so far from memory that Anne-Marie Routhier, a Millbury resident originally from Grafton Hill, said she was learning about it for the first time during Sunday’s events. She also said she was glad to see folks attending events in city landmarks like Tuckerman Hall and the American Antiquarian Society.

“It was really wonderful to see so many people out at the old buildings, really enjoying it,” she said. Mary Paradiso of Fitchburg, who works in downtown Worcester, echoed Ms. Routhier’s comments, after taking a tour of Salisbury Mansion on Highland Street.

“I’ve been wanting to see in this building a long time,” Ms. Paradiso said. “I drive by it twice a day.” In front of the mansion, two ladies in colonial costume took afternoon tea, explaining to passers-by how the struggle for independence affected home life in 1770s Worcester. Elizabeth Bigelow and her daughter-in-law Anna — portrayed by Sharon Burnston of Epsom, New Hampshire, and Elizabeth Jones of Concord, New Hampshire — noted that they were drinking chamomile tea rather than black tea because of the patriots’ ban on imported goods from England.

Mr. Schumacher-Hardy, a Lancaster native descended from several of the militiamen who gathered in Worcester in 1774, also gave a talk on Revolution-era Lancaster at the Salisbury Mansion. He described the rest of the day — including events he attended at the American Antiquarian Society — as “fantastic.”

“One of the highlights was the fellow who did a re-enactment of Isaiah Thomas,” Mr. Schumacher-Hardy said, referring to Neil Gustafson’s portrayal of the 1770s printer and patriot based in Worcester. “Very knowledgeable, very innovative, very accurate, very captivating. He drew you in.”

Events Sunday began at 10 a.m., with a grave marking for Revolutionary War soldiers in Rural Cemetery and ended with the courthouse re-enactment at 4 p.m.

Other events included crafts and children’s activities at Institute Park and the Daughters of the American Revolution house on Lincoln Street; music programs at Institute Park and Tuckerman Hall; other lectures and tours; and the premiere of the play “The Chains of Liberty” at the Worcester Area Mission Society.