To honor Worcester County’s role in starting the American Revolution. 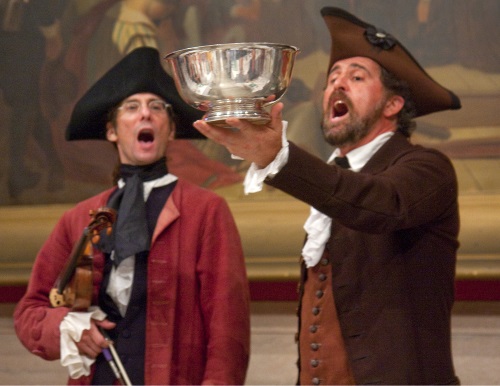 Tripp & Toddy present a unique, fast-paced colonial diversion that both enlightens and entertains. These two authentically attired wags whisk you back to the 18th century with polished wit.
Worcester Revolution of 1774 invites you to a free day-long festival of activities celebrating Worcester County’s role in starting the American Revolution. The full schedule is below.

The event will take place on September 7, 2014 from 10 a.m. to 5 p.m. at various locations in and around Institute Park in Worcester, Massachusetts. The event is family oriented, and open to the public with activities for all ages.

Nearly seven months before the American War of Independence began with the battles of Lexington and Concord, 4,622 militiamen from 37 towns of Worcester County marched down Main Street in Worcester, shut down the Crown-controlled county courthouse and, for the first time ever in the American colonies, effectively overthrew British authority to be come independent. The date was September 6, 1774 — nine years before the end of the revolutionary war. Not a shot was fired.

It was Worcester County’s militiamen that set the stage. Revolts followed in every single county in Massachusetts outside Boston in the fall of 1774 as a result. It was these revolts that truly ended British rule in the colony and opened the door for citizens to form their own government. The following spring, when General Gage wanted to retaliate against Worcester, his spies warned him not to attack there, where arms and powder were stored and where patriots were too strong. He decided to go after Concord instead. 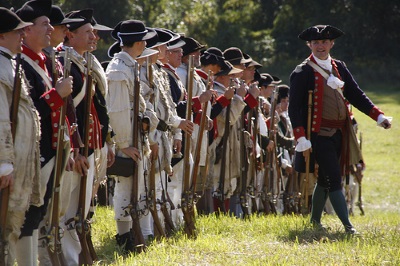 History buffs, contrary to popular belief, don’t spend all their time bent over musty tomes and old papers. The amateur historian can find many outlets for his or her passion for the past, and one of the most exciting outlets are reenactments.
No one is sure why this story has been untold for so long, but Worcester Revolution of 1774 is out to change that. Across downtown Worcester where the event happened 240 years ago, the American Antiquarian Society, First Congregational Church, Institute Park, North Main Street, Rural Cemetery, Salisbury Mansion, The Oaks, and Tuckerman Hall will be filled with stories, dramatic presentations, children’s activities, period craftsmen, colonial militia, interpreters, historical documents, and a reenactment of the Worcester Revolution itself.

The program has offerings for all ages. For younger children, there will be children’s activities with games and music. Additionally, for all ages, a variety of sounds will be heard from the Salisbury Singers, Sir Jeremy Bell, the Jolly Rogues Quartet, and street musicians. There will be bus tours, interpreters of historic figures, and colonial militia as well. Celebrating throughout the day will be Ray Raphael, noted author and historian, to meet with readers of the community-wide read of “First American Revolution”, host a discussion group, and narrate the reenactment on Main Street at the end.

Premiering at the celebration is a professional dramatic presentation. The play tells the story of Worcester in the Revolution through the eyes of Timothy Bigelow, leader of the Whig resistance and Captain of the local militia, Timothy Paine, a wealthy elite Tory, Mary Stearns, innkeeper, and Winslow Worcester, Paine’s black slave. It portrays the oppression faced and the extraordinary effort and collaboration across Worcester County to free themselves and become independent.

Salisbury Singers, a mixed chorus of selected volunteers under the dynamic leadership of Music Director Michelle Graveline, is now in its 40th season. An amazing site to see.
Worcester Revolution of 1774 is being realized by volunteers from nine major cultural and historic nonprofits who have worked together for eighteen months to plan and realize this event. “We have strived to create a setting that will attract citizens to the unique and historic role of Worcester. We want to raise awareness of this pivotal event in American history,” said Michael Fishbein, coalition spokesperson.

While this lineup is in place, none of it would have been possible without the funding and support so generously provided by the Fuller Foundation, Greater Worcester Community Foundation, MassHumanities, Society of Cincinnati, Society of Colonial Wars, and the Worcester Arts Council.

The celebration is an opportunity for all to come and hear of the remarkable achievements of Central Massachusetts in founding America in a family-friendly atmosphere. It is an opportunity to celebrate the significance of our community.


Festival Schedule as of August 25th

THROUGHOUT THE DAY (Check Schedule)

Interview with Representative Michael N. Castle of the Delaware Society

An Interview with Representative Michael N. Castle of the Delaware Society By Timothy R Bennett,…

Dedham man to get belated recognition for service in the Revolution

A Dedham man who marched against the Redcoats during the battles of Lexington and Concord will be honored this Saturday in a hometown ceremony initiated by a descendant from across the country.

George Lipphardt, a genealogy buff from Tucson, Ariz., will travel to Dedham to see the Sons of the American Revolution place a marker at the grave of Captain Joseph Lewis, Lipphardt's fifth-great grandfather.

"In order to join the organization, you have to be able to prove you had an ancestor that participated in the revolution against England," Lipphardt said of the Sons of the American Revolution, counterpart to the more