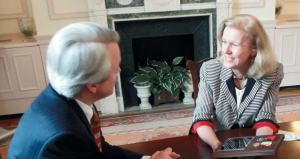 Above, President General Joseph W. Dooley meets with Anne Anderson, Ireland’s ambassador to the United States, at the Irish Embassy.

In preparation for the SAR’s trip to Ireland in May 2014, President General Joseph W. Dooley met with Her Excellency Anne Anderson, Ireland’s 17th Ambassador to the United States, at the Irish Embassy in Washington, D.C., on April 3. The embassy is located on Massachusetts Avenue, Washington’s famous Embassy Row, between the Romanian and Sudanese embassies, and across the street from the Greek Embassy. The embassy flies the flags of both Ireland and the European Community, which Ireland joined in 1973.

Gilbert Stuart’s “Portrait of a Lady” hangs over the their discussion, the PG described some of the highlights of the SAR’s upcoming trip to Ireland, in which nearly 100 compatriots and spouses will participate. In addition to ceremonies honoring two Irish-born patriots of the American Revolution, the trip includes stops at historic sites throughout Ireland and Northern Ireland. Meetings are scheduled with various officials, including the Lord Mayor of Dublin and the Lord Mayor of Belfast. PG Dooley and Anderson also discussed several common acquaintances in the Irish-American community.

Anderson gave an overview of some of the current issues that SAR members may hear about during their trip. One of those issues is immigration. Because of the recent economic hardships, many Irish citizens have sought work in the United States while living with Irish friends or relatives. Some entered the United States as tourists but have stayed to work and, therefore, are now illegal immigrants. Because of tight immigration policies, they could not legally have immigrated for work, and now they cannot leave for fear of not being able to return and being separated from spouses and children. In short, there are Irish immigrants facing the same challenges usually associated with illegal aliens from Mexico and Latin America. This issue is on the minds of Irish citizens and their government.

During the meeting, PG Dooley presented Anderson with the SAR International Medal and the Commodore John Barry Medal, which is the medal specially struck for the SAR trip to Ireland. Commodore Barry is known as the “Father of the American Navy.” Barry was born in a modest thatched cottage in 1745 to a poor farming family at Ballysampson on Our Lady’s Island, in County Wexford, Ireland. By 1766, he was in Philadelphia, where his skills as a ship’s captain eventually came to the notice of one of Philadelphia’s premier mercantile houses, Meredith and Clymer, and Revolutionary War financier Robert Morris. When war broke out, Barry was assigned to outfit the first ships of the Continental Navy. When he finished the fitting out, he was commissioned as a captain in the Continental Navy on March 14, 1776, and given command of the brig Lexington. He served throughout the Revolution, including in the final sea battle between his ship, the Alliance, and HMS Sybil on March 10, 1783. 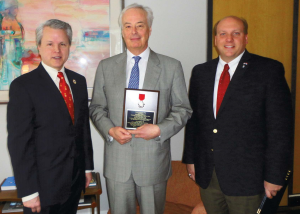 PG Dooley and Michael J. Elston honor Anderson with the SAR International Medal and the Commodore John Barry Medal.
While the Continental Navy was disbanded at the end of the Revolution, in 1794 President George Washington called on Barry to oversee the construction of new ships and lead the newly constituted United States Navy as a Commodore. Commodore Barry holds Commission No. 1 in the United States Navy; he is the first commissioned officer and the first flag officer in the Navy. Barry ended his active-duty career in 1801 as commander of the United States Naval Station in the West Indies at Guadaloupe, but he remained head of the Navy until his death on Sept. 12, 1803.

PG Dooley was accompanied during his visit to the Irish Embassy by aides- de-camp Michael J. Elston, vice chairman of the NSSAR Government Relations Committee, and E.B. Coggins Jr. of the George Washington Chapter. While there, PG Dooley also presented SAR certificates of appreciation to members of the embassy staff who had assisted in arranging the meeting with Ambassador Anderson. The SAR trip to Ireland took place from May 1 to May 11.

Blue Water Patriots: Birth of the U.S. Marine Corps Nov 10, 1775 During the American…