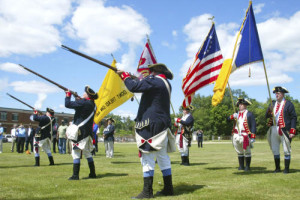 The Sons of the American Revolution fire a volley at the Littleton 300 opening ceremonies on Saturday. (Sun/Bob Whitaker)

LITTLETON — In 1774 and 1775 the town of Littleton, like many communities in the area, had to decide whether to go to war with the British.

“What a decision to make. What a thing to think about. Are we going to go to war with the greatest naval nation in the world at that time?” said Henry Atkins, a member of Opening Day Committee for the town’s tercentennial. “When you read into the history of Littleton, it’s amazing to see the things that went on here.”

Littleton’s marked the start of its 300th anniversary celebration on Saturday morning, with a large crowd filling the bleachers at Alumni Field. Large clouds of smoke erupted and shots reverberated from the muskets of the Sons of the American Revolution, a group that promotes American history and always comes in full Revolutionary War battle dress.

Several members of the group had attended Littleton’s 300th anniversary kickoff to provide some historic perspective as well as some loud reports following the raising of both the American and Littleton flags.

William Battles III, past president of the Sons of the American Revolution explained what it must have been like for the 129 Littleton residents that left town to fight at the Battle of Lexington and Concord.

“Think about it. 129 men left here … gave up their homes, gave up their goods … took their weapons and took off to Concord just to protect the cache of the weapons they had here because the British were coming,” said Battles. “The best, well-trained army in the world at that time, these clowns were going to take on.”

The 300th Anniversary Opening Day committee had many speakers planned for the opening day ceremonies, including local and state politicians.

“In 2014 we celebrate 300 years since our incorporation as a town. Which, you know what that means … that means 300 years of town meetings,” said Town Administrator Keith Bergman, getting a laugh from the crowd.

Terecentennial General Committee Chairman Jack Holmer told the crowd how he was one of the few who was around to take part in and remember Littleton’s 250th celebration in 1964.

State Auditor Suzanne Bump explained how difficult it can be for some communities to adapt to a constantly changing world and how the community of Littleton has been able to stay successful.

“Littleton can only continue to be as successful as it has been by remembering its history. Watch enough of the news these days and you’ll no doubt come across a town or a city that has lost its identity to apathy and could not cope with change,” said Bump. “Here in Littleton you avoid such sorrows by fighting back with pride and kindness to one and another. I am sure that Littleton will see another 300 years of success.

Also speaking at the event were state Senator James Eldridge, D-Acton, and state Rep. James Arciero, D-Westford, who, in addition to Bump, brought citations from their respective bodies.

The ceremony on Saturday has kicked off roughly three months of events, which will include parades, picnics, balls, fireworks and more.

Find out more about Littleton’s Tercentennial events by visiting their website. More information on the event may be found here.

Today, the Worcester Revolution of 1774 announced that their launch of their 'Digital Committee of Correspondence' begins June 1st. Since their mention of it in the fall, they created a way to spread the moments of this dramatic time through the lens of the computer and mobile phone. In fact, their focus on a