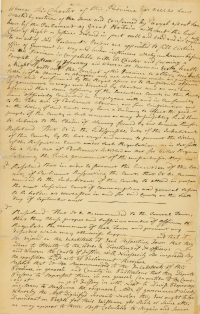 This document embodies one of the first instances of open rebellion against the Crown, and records a critical step in the formation of an independent government. Parts of it are written and signed by Major Nathaniel Sartell Prentice, who fought at the Battle of Lexington, less than a year later.

The manuscript starts with a copy of resolves issued on August 31, 1774, in response to one of the Intolerable Acts, by a convention of the Worcester County Committees of Correspondence. The Intolerable Act barred the commonwealth from holding town meetings. Delegates conclude that the act rendered the royal charter “null and void,” and they resolve that the various towns should take over the function of the British-run court system. They ask citizens to select their own town officials, choose representatives for a Provincial Convention, and take action to prevent the courts from sitting under the new system. One resolve specifies that citizens attend the upcoming court session “properly Armed to repel any hostile force” sent by the governor, and another votes to send “Letters by Post to other Committees” should an invasion

[Worcester, 1774, 4pp., 8-1/2′ x 13-1/4]   “Whereas this Charter of this Province as well as Laws enacted by virtue of the same and confirmed by royal assent have been by the Parliament of Great Britain[,] without the least coler of Right or Justice[,] Declared in part null and void and in conformity to an act of said Parliament Persons are appointed to fill certain offices of Government in way and under influences wholy unknown before in this Province incompatable with its Charter and forming a Complete System of Tyranny[,] and whereas no Power on Earth heath [hath] a Right without the Consent of this Province to alter the minutest tittle of its Charter or abrogate any act whatever made in pursuanc[e] of it and confirmed by the Royal assent or to constitute officers of government in ways not directed by Charter and as we are assured that some officers of the Executive Courts in this County have officially conducted in complyanc[e] with and in conformity to the late acts of Parliament altering our free Constitution and at the sitting of said Courts, may have a Tendency to Effect the good people of this county in such manner as may Insensibley lead them to submit to the Chains of Slavery formed by our Enemies therefore. Resolved That It is the Indispensible duty of the Inhabitants of this County by the best ways and means to prevent the sitting of the Respective Courts under such Regulations as is set forth in a late act of Parliament Entitled [‘]an act for better regulating the Civil Government of the Massachusetts Bay[‘]— 2d Resolved that in order to prevent the Execution of the late acts of Parliament Respecting the Courts that It be Recommended to the Inhabitants of this County to attend in person the next Inferior Court of Common pleas and general sessions to be holden at Worcester in and for said County on the sixth day of September next— 3d Resolved That It be Recommended to the Several Towns that they choose proper and sufficient number of officers to Regulate the movement of Each Town and prevent any disorder which may otherwise happen — and that it Be Enjoin,d on the Inhabitants of Each Respective Town that they adhear to [sic] Strictly to the orders & Directions of sd officers — and Whereas the Courts of Justice will Necessarily Be impeaded By the oppesition to the sd acts of Parliament therefore— Resolv,d that it Be Recommended to the Inhabitants of this Province in general and County in Particelour that they Depute Persons to Represent them in one general Convention to Be Convend at [blank space] on ye 2d Tuesday in octo.r Next to Devise Proper ways and Means to Reassume the origenaral Mode of government whereby [sic] Whereby the Most Dignifyd Servants ware (as they Ever ought to Be) Dependant on People for their Existance for such or some other as may appear to them Best Calculated to Regain and Secure our violated Rights the Justness of our Cumplaints & Modes of Redress we submit to the Determination of our Sister Coloneys Being in our oppinion the only Just Tribunal we Can appeal to on Earth[.] Resolv,d that it Be Recommended that such Inholders & Retailors Who shall Be approbated By the Selectmen in their Respective Towns to Continue to Exercise their several Functions and that they strictly adhear to the laws of the Province Respecting Inholders & Retaillors— Resolv,d that it Be Recommended to the Several Towns that they endemnify their Constables for Neglecting to Return Lists of Persons Qualifyd To Serve as Jurers— Resolvd that as the ordenary Courts of Justice will Be Stay,d in Consequence of the Late arbtrary & oppressive acts of [inserted: British] Parliament we would arnestly Recommend it to Every Inhabitant of this County to Pay his Just Debts as Soon as Possible without any Dispute or Litegation— Resolvd that the Dark & gloomey aspects of our Publick affairs have thrown this Province into generall Convulsions and the minds of the Inhabitants grately aggetated With a near vew [view] of Impending Ruin we Earnestly Recommend to Every one & we Engage for our selves to use our utmost influence in Suppressing all Ryots and Disorderly Proceedings in our Respective Towns— Voted that it Be Recommended to the Towns in this County to Pay no Regard to the Late acts of Parliament Respecting Calling Town Meetings But Proceed in the usual manner & also that they Pay No Submition to sd acts in any other Respect— Voted if there is an Invasion or Danger of an Invasion to Send Letters by Posts to other Committees to attend Properly arm,d to Defend themselves.

Remarkably, the document not only shows a key step in separation between the Crown and the colony, but also shows the chain of action; county and town. The Worcester resolve is followed by a record of the Grafton town meeting held to consider those measures. It’s a fascinating look at the grassroots nature of independence, uniting citizens of the smaller towns to take over their own governmental functions. This pivotal step helps explain why the towns were ready to send militia the day they received word of the Lexington alarm.

On September 5, 1774, Captain Luke Drury moderated a Grafton town meeting held to consider the resolves. By a unanimous vote, the townspeople agreed. More than 15 town officers and militia leaders were elected, as recorded here. The notes authorize the new officials to “inflict punishment” on disorderly individuals – essentially, to substitute for the now invalid court system.

In response to the resolution, the next day, when the court met, more than 5,000 Worcester men, “properly Armed,” lined the route leading to the courthouse. The royal justices were quickly persuaded that it was in their best interest to stay the proceedings.

Nathaniel Sartell Prentice (1735 – 1815) Born in Grafton, Massachusetts, Prentice lived in Alstead, N. H. He was Captain of the Third company, Sixteenth regiment of New Hampshire militia and a Major in Colonel Baldwin’s regiment. He was also a member of the New Hampshire Provincial Congress in 1776 and the Committee of Safety.

Luke Drury (1734-1811) of Grafton, Massachusetts joined the militia in 1757 during the French and Indian Wars. As captain of a company of Minutemen, he responded to the Lexington Alarm, and later joined Colonel Jonathan Ward’s regiment to fight at Bunker Hill. Drury and his men served in different areas during the war, from West Point to Grafton, where his company guided military stores. He also supported the Continentals financially, at one point giving £50 fifty pounds to enlist soldiers in Grafton.

In 1786-1787, Drury became deeply involved in Shays’s Rebellion, a tax revolt led by farmers in western Massachusetts. The uprising was quashed, and Drury imprisoned as “a person dangerous to the state.” He was eventually released on good behavior. Drury remained active in state and local politics, serving terms as a constable, deputy sheriff, tax collector, assessor, selectman, and state legislator.