Alerted by signal lanterns, express riders Paul Revere and William Dawes eluded British patrols and spurred their horses toward Lexington along separate routes to warn Hancock and Adams.” – Created Equal: A History of the United States, a 2009 college textbook [1]

Neither Paul Revere nor William Dawes received news of the Regulars’ advance by signal lanterns. In his classic “Paul Revere’s Ride,” published in 1861, Henry Wadsworth Longfellow exercised considerable poetic license with his legendary “One if by land, two if by sea” drama. Revere, “impatient to mount and ride,” pats his horse, gazes across the landscape, and stamps the earth, fretfully passing the time for sixteen lines until he ﬁnally spots two lanterns in the steeple of Old North Church. Twenty years ago David Hackett Fischer laid this tale to rest, but the take-away from Fischer’s meticulous deconstruction of the legend, in popular accounts and several modern textbooks, is merely that Revere did not ride alone: Dawes rode as well, they say, and some even mention Samuel Prescott. A lone rider has turned into two or three, but this dodges the issue. The Revere story is much broader, and stronger, than Longfellow’s tale or its modern modification.

Longfellow’s poem distorts the historical record on four counts. The first three, for history buffs, will be old news, but the fourth goes deeper, to the very heart of how we tell historical tales.

(1) Longfellow’s Revere worked both ends of the signal lantern ploy, which accounted for more than half the poem. Before crossing the Charles River, Revere told a “friend” how to work the signal; then, after arriving on the opposite shore, Revere supposedly waited to receive it. We do not know who actually received the signal on the opposite shore, but we do know it was not Paul Revere. After being dispatched by Joseph Warren, but before crossing the river, Revere arranged for two lanterns to be lit—so that someone else might see them in Charlestown and set off to warn other patriots. Someone else? Facts had to be altered to accommodate Longfellow’s yarn. There could be no other rider in “Paul Revere’s Ride.”

(2) To achieve maximum effect, Longfellow had Revere visit “every Middlesex village and farm.” Although some allowance can be made for hyperbole, Longfellow certainly knew that his protagonist never reached Concord, the shiretown (county seat) of Middlesex County, the destination of the British troops, and the “Middlesex village” most in need of warning. The real Revere tried and failed to get that far.

(3) In 130 lines, Longfellow said not a word about Revere’s detention by British officers, which, in Revere’s own contemporaneous rendition, was the main event.[3]. That would have revealed a British presence in the vicinity of Lexington and Concord, so what need then for a messenger? For the story to work, all soldiers had to be stationed to the rear of Revere and his horse. “The Redcoats are coming” loses its dramatic effect if we know that some Redcoats have already arrived. 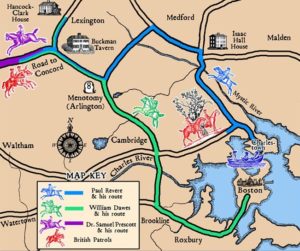 (4) If Longfellow’s poem had remained just a children’s story, such historical inaccuracies could be overlooked. But when fiction morphed into fact, the story of a lone rider waking up sleepy-eyed farmers turned history on its head and altered the very meaning of “revolution.” Except for two bit players—his horse and the friend who lit the lanterns—Longfellow’s Revere acted on his own, but in fact there were many others, and these people, like Revere, were true revolutionaries. David Hackett Fischer’s reconstruction of the event includes a very full cast of characters:

Paul Revere was not so alone after all, and Dawes and Prescott were not his only fellow messengers. When the main British column approached Lexington, bells and signal shots echoed from front and rear. The entire countryside was aroused and ready. This wasn’t the work of one man but of an intricate web of patriotic activists who had been communicating with each other for months. Ever since the true start of the American revolution, they had prepared for military confrontation. Anticipating just such an event as the British assault on Lexington and Concord, they had rehearsed their response. Each man within each town knew whom to contact and where to go once the time came—and now the time had come. The true story of the “Lexington alarm” is deeper and richer than Henry Wadsworth Longfellow, with his emphasis on individual heroics, led us to imagine.

[2] William Deverell and Deborah Gray White, Holt McDougal United State History: Beginnings to 1877 (Houghton Mifflin Harcourt, 2012), 114. Another middle school text passes on the legend while technically avoiding a falsehood: “As the troops set out, a signal sent by the Patriots appeared in the steeple of Boston’s Old North Church. Two men, Paul Revere and William Dawes, then rode through the night to warn the minutemen.” Students reading this passage will of course assume that the two sentences are causally linked and that Revere and Dawes, having seen the signals, set off on their mission­. James West Davidson and Michael B. Stoff, America: History of Our Nation (Prentice Hall, 2014), 153

[3] Three days after British Regulars marched on Lexington and Concord, the Massachusetts Provincial Congress authorized the collection of ﬁrsthand reports from those who were participants or observers.Paul Revere came forward to tell what he knew.In his account, Revere devoted only one short sentence to his now-mythic ride. Additions were to come later. Nowhere in his statement did Revere mention the lantern signals from the Old North Church, a seemingly trivial detail. Instead, he featured a harrowing experience that Longfellow saw ﬁt to overlook. After giving his message to Adams and Hancock, Revere and two others set out toward Concord to warn the people there—but he did not get very far before being captured by British officers. For most of his deposition, Revere talked of this capture, of how the officers had threatened to kill him ﬁve times, three times promising to “blow your brains out.” Though he had carried messages from town to town many times before, Revere had never encountered such serious danger.(Edmund S. Morgan, ed., Paul Revere’s Three Accounts of His Famous Ride (Boston: Massachusetts Historical Society, 1961).

Founder's Day originated from a proclamation by the United States Continental Congress on October 11, 1782, in response to Great Britain's expected military defeat in the American Revolutionary War. The war did not formally end until Congress ratified the Treaty of Paris on January 14, 1784. The purpose of the proclamation was essentially to thank God for America's good fortune in the Revolutionary War.