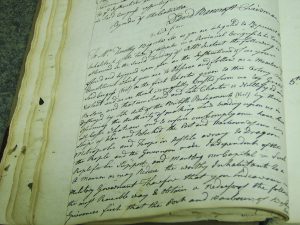 Portions of the instructions from the October 4, 1774 Town Meeting, from Worcester’s Town Records, Volume 4, kept in a vault in the basement of Worcester City Hall, with permission from the Worcester City Clerk.

Americans did not formally resolve for independence until 1776.

On October 4, 1774, the town meeting of Worcester, Massachusetts, declared that British rule was over and it was time to form a new government, not answerable to the Crown and Parliament. This act by a public body was twenty-one months before Congress approved its own Declaration of Independence on July 4, 1776.

In the late spring of 1774, Parliament yanked away the Massachusetts Charter of 1691, which had granted people considerable say in their government. In response, on September 6 in the town of Worcester, thousands of militiamen closed the county courts, ending British rule. This left people in a “state of nature,” as people said at the time, beyond the protection of any government. Who would fill the vacuum?

On the local level, the Worcester County Committees of Correspondence assumed temporary authority. Acting in concert, the committees reorganized the militia to prepare for a counter-offensive they knew British officials would soon stage. They also promised “to put the laws in execution respecting pedlars and chapmen” and maintain civil authority in all other respects.

On the provincial level, the power void would be filled by the Massachusetts Provincial Congress, slated to meet in early October. (Back in August, Worcester patriots had instigated a four-county convention of the committees of correspondence, and that convention had issued the call for such a congress.) On October 4, the Worcester Town Meeting issued instructions to the blacksmith Timothy Bigelow, its representative to that upcoming Congress. If the Massachusetts Charter of 1691 was not fully restored by the time the Congress convened the following day, which was obviously impossible, it told Bigelow:

. . . you are to consider the people of this province absolved, on their part, from the obligation therein contained [the 1691 Massachusetts charter], and to all intents and purposes reduced to a state of nature; and you are to exert yourself in devising ways and means to raise from the dissolution of the old constitution, as from the ashes of the Phenix, a new form, wherein all officers shall be dependent on the suffrages of the people, whatever unfavorable constructions our enemies may put upon such procedure. [See image 1 above, which announces the instructions, and image 2 below, the fifth instruction, which commands Bigelow to push for a new government.] 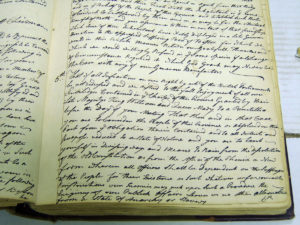 Portions of the instructions from the October 4, 1774 Town Meeting, from Worcester’s Town Records, volume 4, kept in a vault in the basement of Worcester City Hall, with permission from the Worcester City Clerk. Click to enlarge this image.

John Adams, in Philadelphia attending the First Continental Congress, wrote to a friend back home: “Absolute Independency … Startle[s] People here.” Most delegates attending the Philadelphia gathering, he warned, were horrified by “The Proposal of Setting up a new Form of Government of our own.” Samuel Adams, also at the Continental Congress, likewise cautioned the people of Massachusetts not to “set up another form of government” for fear of jeopardizing support from other colonies. Those revered revolutionaries from Boston, who allegedly drove the agenda, were trying at this moment to slow down the Revolution that had swept across the countryside. “Independency” should not come too soon, they said, and in fact it had to wait; leadership at the Provincial Congress fell into the hands of the more educated, experienced, and cautious representatives from eastern counties. If the radicals in Worcester had had their way, however, Massachusetts would have declared independence on its own, without waiting for other colonies to join in.

RESEARCH ALERT: While Worcester’s declaration for independence is dramatic and certainly worthy of note, Worcester might not have been alone. Thus far, it constitutes the earliest act by a public body pushing for independence, but other towns might have done likewise, for the Revolution of 1774 encompassed all of mainland, contiguous Massachusetts. If some aspiring researcher poured through the records of the 209 towns and districts sending delegates to the Provincial Congress, he/she might well uncover others.

Boston and the Dawn of Independence

An Alarm from Lexington

In the archives of the Historical Society of Pennsylvania is a manuscript letter four pages long. Bearing the names of thirty-nine signers in seventeen towns and cities between Boston and Philadelphia, it describes in brief and urgent detail the tragic events near Boston on April 19,1775, the battles of Lexington and Concord.

The story of the letter's five day journey as it was carried by post rider three hundred and fifty miles through Massachusetts, Connecticut, New York, and New Jersey to Philadelphia, and the excitement and reaction to its news, is unique in our nation's history. Although the letter originated in Watertown, Massachusetts, at the eastern end of the Boston-Worcester road, its story begins in Boston about six miles to the southeast.

A meeting of the Massachusetts Provincial Congress was scheduled for April 19th in Concord. Dr. Joseph Warren, in Boston, a zealous champion of American liberty, learned of a British march into the countryside in an effort to disrupt the meeting and to capture the leaders. Warren dispatched William Dawes and Paul Revere by separate routes to warn John Hancock and Samuel Adams in Lexington. While Dawes road toward Lexington, Revere implemented a prearranged plan to alert a series of alarm riders and had two signal lanterns placed in the North Church belfry before setting out for Lexington. Both men reached Lexington

The Crossing of the Dan Documentary