On July 15, buses arrived at the Bechtel Summit Reserve delivering the nearly 35,000 Boy Scouts who participated in the 2013 National Scout Jamboree. They were arriving for the inaugural scouting event at The Summit, the 11,000-acre new permanent home of the National Jamboree in the New River Gorge near Mt. Hope, W.Va. The Jamboree is considered by many a capstone event in the life of a Scout, as it is the largest event for the Boy Scouts of America, held every three years. The Summit boasts ziplines, white-water rafting, rock climbing and mountain biking around its six massive base camps.

Several members of the Sons of the American Revolution served on the Jamboree staff for this year’s event. Their purpose was to interact with the Scouts and Scouters to increase awareness of the SAR, encourage participation in the Eagle Scout Scholarship Contest and other youth contests, and help educate the attendees about the American Revolution. They also enjoyed handing out the popular and much sought-after 2013 National Jamboree Patch, created by the team for the NSSAR.

Planning started more than a year in advance as details on staff sign-up and organizational logistics were announced. The setup, registration and schedule were different from any in the past, making the initial planning a challenge, but the end result as a well-coordinated kickoff. Our exhibit area was set up in what was called the Faith and Beliefs area, which housed not only religious organizations exhibiting at the Jamboree but also patriotic and fraternal organizations encompassed by “Duty to God and My Country” as proclaimed in the Scout Oath.

Charles W. Dahlquist II, chairman of the BSA’s Summit Faith and Beliefs Center, said, “Prior to the Jamboree, we had discussions about the importance of and how to teach patriotism to a rising generation that is not facing a general draft or overt threat of domestic safety, as was the case in prior generations. The SAR was our answer at the 2013 BSA Jamboree at the Summit. Through their period revolutionary dress, knowledge of the revolutionary period, love of country and the need for patriotism today, they touched the lives of thousands who flocked to the SAR booth at the Faith and Beliefs area as they spoke with Scouts about the revolutionary period and as they taught ‘Duty to Country,’ a vital part of the Scout Oath.” 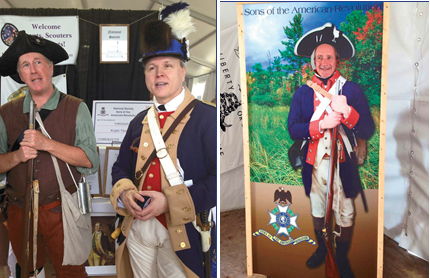 Former Connecticut State President David Perkins and National President General Joe Dooley, above, paid a visit to the Jamboree, which took place at Summit Bechtel Reserve. Compatriots manned the booth during the run of the Jamboree in West Virginia.
Those serving on staff, spending a minimum of a week at the Jamboree, included Daniel Haas of the OHSSAR who led the overall contingent; David Perkins, CTSSAR, who led the second week contingent; Gary Chrislip, CTSSAR; Curtis Porter, CASSAR; and William Coffeen, GASSAR. They also were helped greatly by Compatriot Carter Wood, GASSAR, who was in attendance at Jamboree with the Masonic Scouters.

One of the highlights occurred on July 20, when the staff was joined by President General Joseph Dooley. Our PG joined the second week staff to get the firsthand experience of working with the scouts at the Jamboree, braving the heat for the day in period attire. When asked about his experience, he said, “My late brother was an Eagle Scout, but this was my first National Boy Scout Jamboree and I was blown away, not just by the size of the event. I had no idea 30,000 Boy Scouts from all over the world would be there, but as much by the hard work of the men on the SAR Eagle Scout Committee. Our presence at the Jamboree is a tremendous opportunity for outreach. I was so impressed that members of the Eagle Scout Committee had prepared. They were distributing materials, not only about the Revolution and life in 18th century America, but also about the SAR Eagle Scout Scholarship, our ROTC Program, our Essay contest and our Oration contest. The Eagle Scout Committee has done truly phenomenal work in the best interest of all SAR Youth Programs.”

The team is already planning for 2017’s Jamboree, looking for ways to include more SAR staff on the ground and to create a better exhibit and presence. The event provides a significant opportunity for outreach to some of our nation’s most outstanding young people, and we hope to again have our society rise to the challenge to advance our educational and patriotic goals.

How To Be A Good Ancestor By Andrew Recinos, President Tessitura Network 29 October 2019…

As we roll out the seventh SAR Color Guardsman, I hope each of you is…