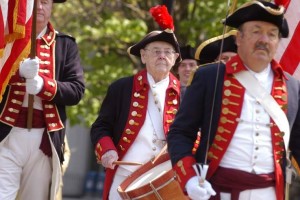 Members of the Sons of the American Revolution march in the opening procession during a rededication of the Col. Timothy Bigelow monument on Worcester Common in 2008. (T&G File Photo).
WORCESTER — It’s ingrained in the nation’s historical consciousness that the shots exchanged between British troops and New England partisans on the fields of Lexington and Concord in 1775 sparked the American Revolution.

But there are some lovers of history who believe that the fight for American independence from the English crown actually began eight months earlier on north Main Street in Worcester when 4,622 militiamen from 37 areas towns marched on the county courthouse.

The militiamen, in defiance of a British general, assembled themselves around the courthouse, refusing to give English authorities access to the building.

They then forced the British officials, hats in hand, to walk a gantlet down Main Street and recant their allegiance to the king.

For a time, some of the English officials were detained at a nearby tavern.

It was the first time ever, in the short history of the American colonies, that British authority was effectively overthrown.

And not a shot was fired.

“The Worcester revolt is noteworthy because it was the first actual ‘revolution’ in the War of Independence — the first real seizure of political and military authority to ever occur in the American colonies,” said William Wallace, executive director of the Worcester Historical Museum. “And it happened almost a year before the first shot was fired at Lexington and Concord. That’s significant.”

Now, the museum and other historical and cultural organizations have joined in a consortium, the “Worcester Revolution of 1774,” to promote recognition of Worcester’s early role in the war.

“Many people, including those who live in the city, have no idea what happened that day,” said Mr. Wallace.

The confrontation in Worcester resulted from passage of the so-called Intolerable Acts, a series of bills that were enacted by the British Parliament in the spring of 1774.

A key provision of the legislation limited the colonists’ rights to representative government.

In essence, the Massachusetts charter was dissolved and British civil authority in the colonies was vested in those serving in the crown-controlled courts.

According to Melvin H. Bernstein, the author of an essay titled “Setting the Record Straight: The Worcester Revolt of Sept. 6, 1774,” area residents “demanded that the courts be run, as they had been, by officials ultimately accountable to the voters through their representatives, and not to court officers beholden to the crown.”

Mr. Bernstein said that the confrontation in Worcester humiliated the British and sent shock waves to Philadelphia, where the First Continental Congress was meeting.

The Worcester event was significant enough to prompt Loyalist spies to advise English Gen. Thomas Gage not to mount an offensive in Central Massachusetts, where “patriots” were waiting for an opportunity to use all the arms and powder that they had been stockpiling.

Consortium activists said they want to instill pride among residents for the early role that Central Massachusetts played in the Revolution.

“We want to raise awareness of this pivotal event in American history to a level on par with that seen in Lexington and Concord,” said Michael Fishbein, a spokesman for the consortium.

He said Central Massachusetts was a “hotbed” of patriotism.

“This is a wonderful story of a (Colonial) city expressing outrage at the loss of rights,” said Mr. Fishbein.

Mr. Wallace said the region is full of Colonial and Revolutionary War history and the era produced many noted personalities, such as Isaiah Thomas, the publisher of the Massachusetts Spy, and Col. Timothy Bigelow, who led local troops in the fight against the British.

Mr. Fishbein said the Worcester Revolution of 1774, over time, became overshadowed by the lore of Paul Revere’s ride and other events of the time.

Mr. Wallace theorized that the incident faded in historical memory because no violence occurred.

The consortium has established a website, www.revolution1774.org, and is planning a regionwide, months-long celebration that’s still in the planning stages.

Blue Water Patriots: Birth of the U.S. Marine Corps Nov 10, 1775 During the American…